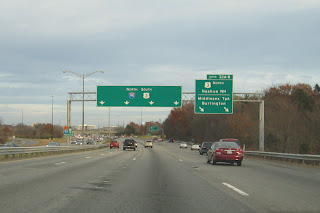 Having been back in Mass. for more than a year now, I've gotten a chance to check the progress of the various MassDOT freeway sign replacement projects (more photos below). Over the last 4-5 years there has been a binge in new sign replacement projects. Whether this is due to deferred maintenance catching up, stimulus funds, new department priorities, or a combination of any of these, signs have been updated on most of the interstates, such as I-195, I-495, the Mass Pike and along with many state limited access highways-MA 2, MA 3, MA 25, and others. The most recent contracts have been along I-95 (MA 128) and I-93. Under 3 current contracts almost all signage along I-93 (with the exception of the Big Dig portion) should be replaced in the next 1 1/2 years. The last major contract for I-95, from MA 9 in Wellesley to MA 4/225 in Lexington was advertised last week. Work has been completed north of there, including the MA 128 only section from Peabody to Gloucester (with new mileposts that recognize MA 128 ends in Canton, ending efforts at truncation, for now?).

Being Massachusetts, the efforts at sign replacement have been complicated by the state's refusal to accept the current 2009 MUTCD, most likely due to the now required use of milepost based exit numbers. When the revised version came out, MassHighway (MassDOT's predecessor) withdrew advertisements for several sign replacement contracts and terminated a contract already in process for I-93 from Randolph to Boston. The major problem, it appeared, was the contract language in these proposals that called for using 'the latest revision of the MUTCD.' MassHighway withdrew these projects and re-advertised them in the last couple years with contracts specifying contractors use the 2003 MUTCD and 2007 Massachusetts amendments. This means consecutive exit numbers and no Clearview font. A MassDOT spokesman indicated in a 2010 e-mail that they were, with several other states, fighting the milepost number requirement and were proceeding with consecutive numbering on new signage with a system in place to allow for rapid conversion to mile-based numbers, if they were forced to change. This was a response to an e-mail I sent which had suggested with all the recent sign replacement contracts, why not use this as an opportunity to switch to mileage based numbers? The response was the continuing debate over the MUTCD with the FHWA and that signs on all the highways would have to be switched almost all at the same time, making it very costly. What about the cost of having to convert the numbers later on? From the FHWA website, it seems Massachusetts is the only state not to have signed on to the 2009 MUTCD. Does this mean they are now the only state fighting exit number conversion?

As for recent sign replacement projects, I was able to travel both MA Route 2 west of I-95 and I-93 and I-95 north of Boston in the last couple months. The latest I-95 and MA 2 projects are basically complete, the I-93 contracts are proceeding but are only at the stage of placing posts for new exit signage along the roadway north of Boston. In a preview of signs to come, MassDOT has replaced some of the signage in Waltham as part of the Winter Street Bridge replacement project. The photo below compares the new signage, identical in style to that replaced further north, with the currently existing signage south of MA 4/225: 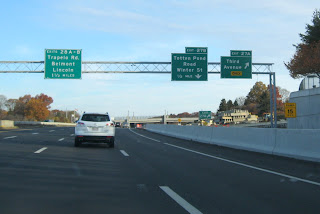 Here's a view of the new bridge that was formally dedicated yesterday (12/27): 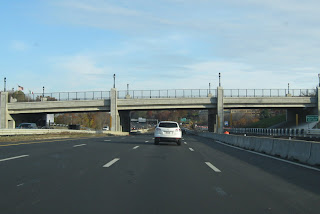 (these have previously been posted on my Facebook page, if they look familiar to some). Taking a look at the new signage along MA 2. The new signs use the previously existing consecutive numbering system which is based on the route being limited access along its total route from I-91 east. No freeway exists for parts of this route so there are gaps in the exit numbers, this route more than others would benefit from a mileage based system. Instead of numbers running from 14 to 43 and 52 to 61, they would run from upward from 67 to 135 (numbers based on MassDOT GIS files listing exit numbers and milepost location). I've previously posted new signage east of I-95 (which would be exit 128, ironically, under a mile-based system) and east. Heading west the first real exit signs are for the re-start of the freeway at the split with MA 111 in Acton: 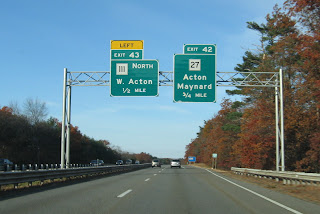 The new signs have the yellow tab above left exits and yellow exit only tabs on right hand exits, not typically seen on previous signs. Here's more from approaching the interchange: 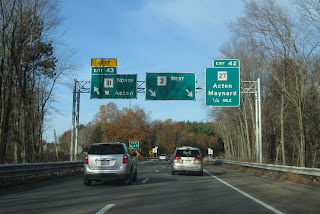 The arrows below the MA 2 west sign reflect a curve 1/4 mile beyond the exit, not at the exit itself. Here's signage approaching I-495: 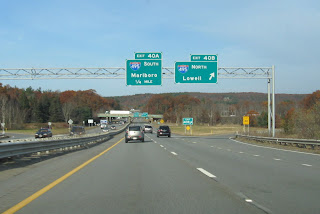 No more button copy for the numbers on interstate signs. Signage approaching I-190: 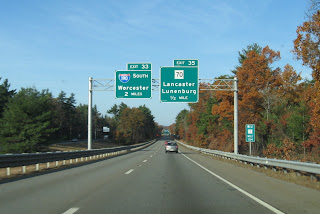 Notice the new 2010 mile marker on the right. Following this system MA 70 would be Exit 103 and I-190 Exit 101. I took a photo of this sign because I remember getting off here on a bus in high school with the rest of the band to participate in the state music competition... 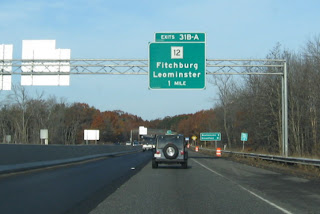 We finished in first place my senior year. The new exit signs continue almost out to US 202 where the highway becomes a Super-2 expressway. The last signs beforehand... 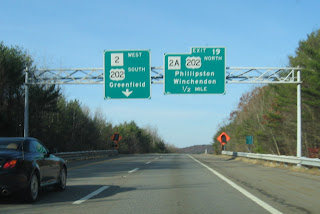 These were taken on the way out to the Road Meet in Bennington VT. The following Sunday I surveyed the new signage on I-95 (128) between Exit 31 in Lexington and I-93 (Exit 37). 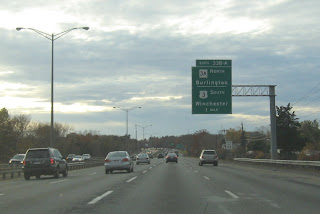 This is new for MassDOT, what I call a 2-tiered sign, both A and B ramps in one sign instead of the traditional 2. This photo shows the new overhead and ground based sign assembly: 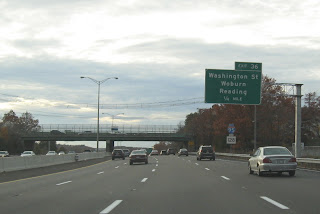 The I-95 and MA 128 shields are both on one pole. This is a return to earlier designs, starting in the 1980s you tended to each route on two different assemblies. Is this to comply with standards or a cost cutting action? This apparently doesn't apply when three routes are involved as when US 3 joins in Burlington: 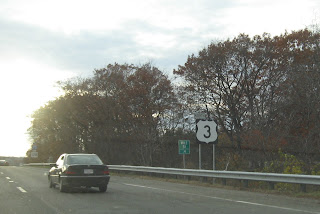 The North US 3 sign is on a separate sign. It will be interesting to see what is done with ground mounted route signs along the I-93/US 1/MA 3 Southeast Expressway.
The new diagrammatic signs are not too different from what was there previously: 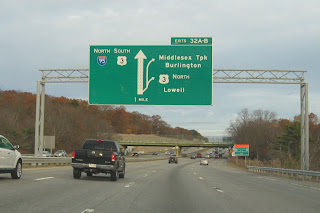 There's room for a control city on the left side, but MUTCD prefers one city which is a problem when the two routes soon go in different directions. Another diagrammatic display for the same exit, headed southbound this time: 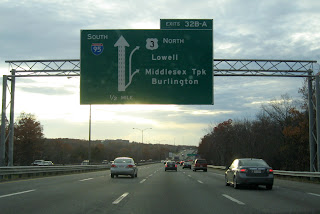 The former 2-tiered signs are split up at the exits for US 3 and MA 3A itself: 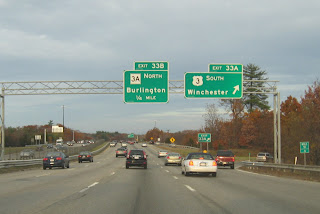 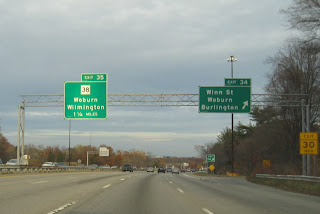 The placement of a sign for the next exit, even if it is more than a mile away, is also somewhat new for MassDOT. Now we are approaching the end of the new signage at I-93: 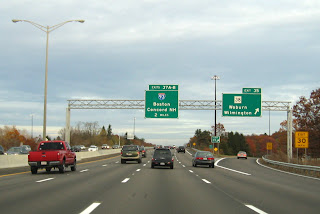 It appears all major interchanges now will have a full exit sign 2 miles before the exit. Previously if one appeared at all, it was very small. 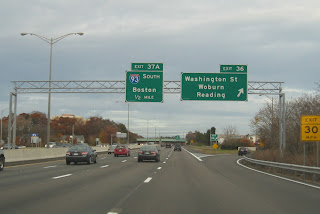 Here we see a sign for I-93 South, but nothing for I-93 north, more or less confusing?
Then this sign for the next exit for MA 28 shows up before I-93: 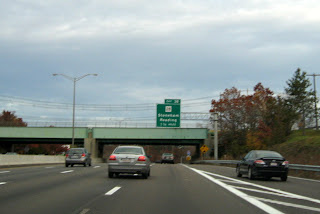 Before you finally get to the I-93 interchange itself. Hopefully, all the stakeholders will eventually agree on how to rebuild this interchange. Meanwhile, now exiting to I-93 South: 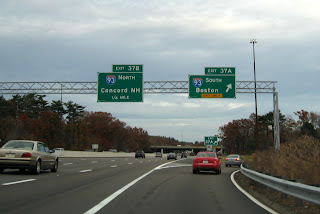 Notice the exit only tab at the bottom, it's quite small, guess they figure you should know your going onto I-93 by now. Like I indicated previously, with the exception of some new signage at some on some of the intersecting roadways, the contractors have not gotten to placing new signs along the I-93 mainline as of yet. This may not happen until the spring.

Lastly, what would be a Mass. signage (or lack of) post be without a personal rant: 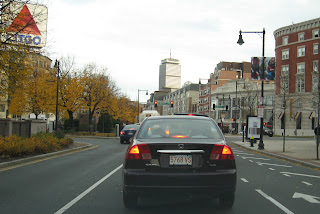 Where are we? If you recognize the Cigo sign and the Prudential building you know that this is Kenmore Square in Boston. It is also the end of transcontinental US 20 where it intersects (for the second time in the past mile or so) MA 2 at the light up ahead. You would never know this if you were depending on route signs. The last US 20 East shield is 1/2 mile back, the first US 20 West assembly is maybe a couple blocks closer to the Square. Any Begin or End signs, references to any numbered routes, or indicators of which route goes where as you proceed either way? Nope. There used to be an End US 20 sign but that came down with the last Square reconstruction with no sign (sorry) of return. Unless you know that Comm. Ave is MA 2 east of the Square and US 20 to the west, you wouldn't know where to turn at this multi-street intersection. But you should know where you are going before coming to Massachusetts anyway, correct?

My next post will bring me back, briefly, to North Carolina.