By Bob Malme October 22, 2010
While on the trip taking photos previously posted of the near finished I-74/US 311 freeway, I also took some photos of the Design/Build Section between Spencer Road and US 220. Currently behind schedule at 41% complete (ideally 50% would be completed by now), there has been some progress, particularly in the southern part of the project since I last visited.

A. Spencer Road and Banner Whitehead Road
Not much progress hear except the moving around of some construction equipment. As can be seen in the photo south of Spencer Road, no grading of the future roadway has begun yet: 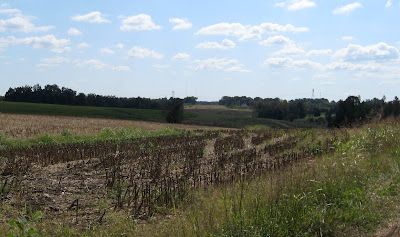 B. Branson Davis Road
This road features both a new alignment and bridge and the creation of an access road back to a farm on Nelson Park Road which is being cutoff by the freeway. Here's a photo looking north back at Nelson Park, the new access road is to the right paralleling the westbound lanes: 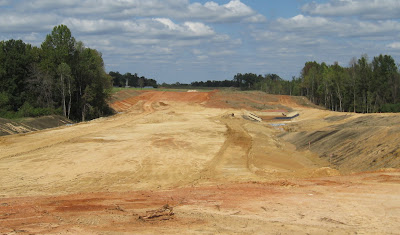 Across the road the alternate alignment and bridge are being built. Here looking south is where the bridge for the new road will go: 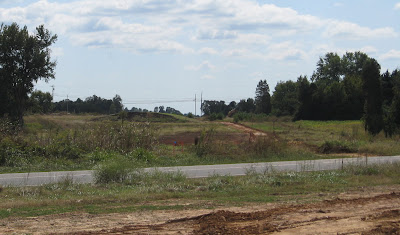 A better view can be seen from Walker Mill Road in the distance. 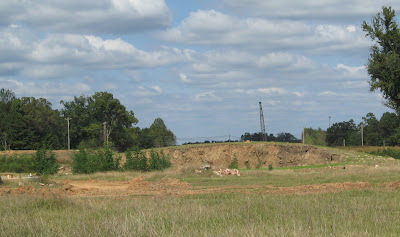 Here you can see the mound being built to take the freeway over Branson Davis. Looking South one can see progress in clearing and almost up to the current US 311 construction area, around the curve. 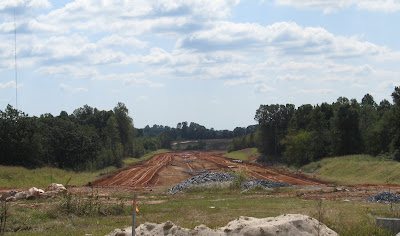 D. Current US 311 Interchange
The big news here is that the concrete deck for the main bridge over the freeway has been poured: 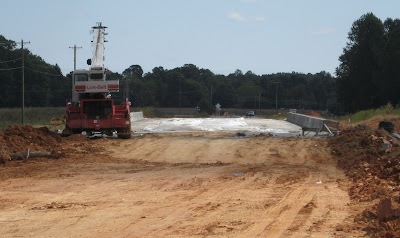 It was still being protected by the elements by a plastic covering, some of which had blown off. There hasn't been much progress on completing the roadway to the west, or east, below: 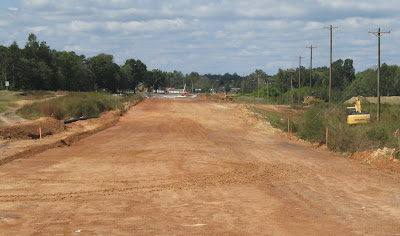 There has been more progress, however, on creating the eastbound on and off ramps: 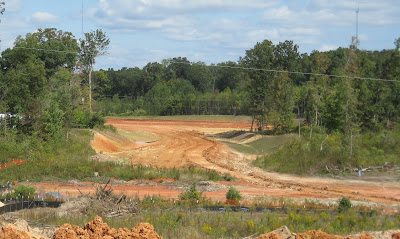 The construction of the roadway stops currently at the train tracks to the south of current US 311, but picks up afterwords. The consensus is the 311 traffic will be moved to the new road and the old alignment will serve as a temporary railroad bed as a bridge is built on the current rail bed to carry trains over the freeway.

E. Plainfield Road
More progress on the bridge to carry the road over the freeway, but some work has been delayed by recent rain (workers were out at this location apparently trying to catch up when I was there). Notice the water under the freeway bridge support: 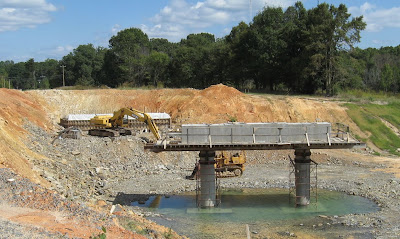 Work has progressed much faster on building the west end of the bridge: 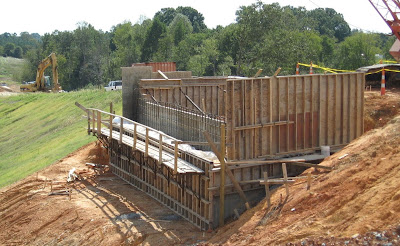 The workers there on Sunday were working on the access road to the farm on Old Courthouse Road that will be cutoff from the freeway. Looking into the distance one can see the road where it will be cutoff and further to the bridge on Heath Dairy Road. 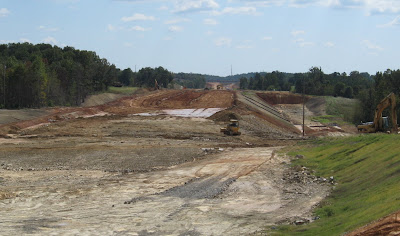 Less progress can be seen looking north across Plainfield Road which is acting as a bypass to the bridge construction: 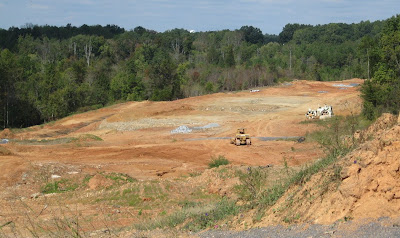 Though there were construction vehicles present, no one was using them at the time.

F. Heath Dairy Road
Progress has been made on the bridge and the grading of the roadway underneath. Here is a view of the entire bridge: 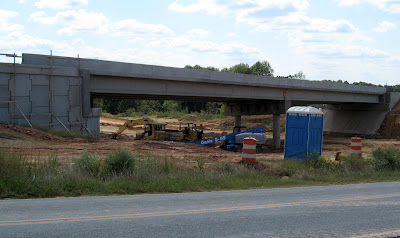 Sorry, if anyone has a sudden urge to go. Notice the disparate design elements on either side. On the east side the wall is vertical on the side and under the bridge, the side includes the wall pieces seen on many new NC bridges. To the west, the cement wall under the bridge is inclined with no element to meet the new roadway. Grading continues on the freeway toward US 220. The work seems to be mostly on the future westbound lanes: 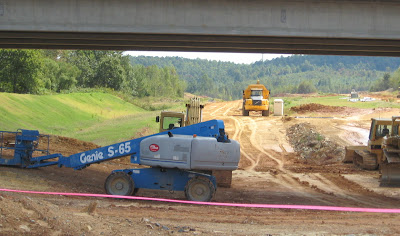 This may be due to ramp construction on US 220, see below. The eastbound lanes as a comparison: 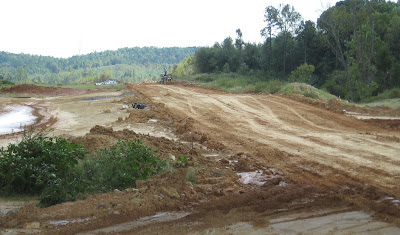 The roadbed here needs more work, at the top of the hill is where the US 220 (I-73) South ramp is to begin. Looking north from Heath Dairy ones sees the opposite of the view from Plainfield Road: 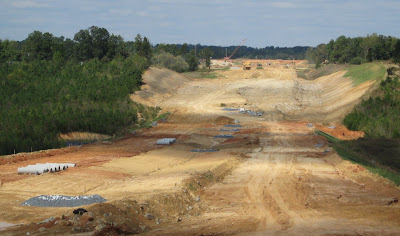 One can see the start of drainage work has begun, along with landscaping near Old Courthouse.
Finally, it's hard to tell if much work has been done on the new road alignment west of the bridge in the past month: 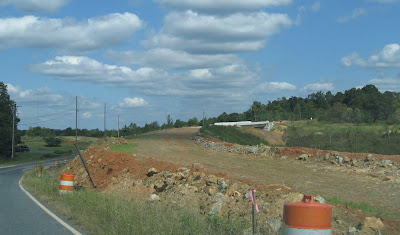 G. US 220 Interchange
While some progress can be seen on the flyover ramps, the most obvious change is work being done on the southbound 220 on and off ramps: 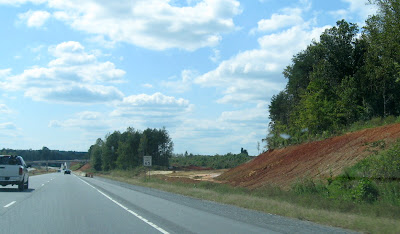 This is the future on ramp to I-74 West with both road grading and landscape work being done.
From 220 Northbound one can get a good look at the future I-74 East on ramp: 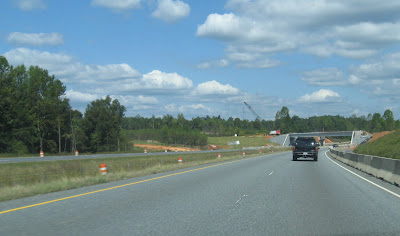 Heading southbound again, both the ramp bridges appear similar to photos from the month before, the eastbound US 220 north on ramp: 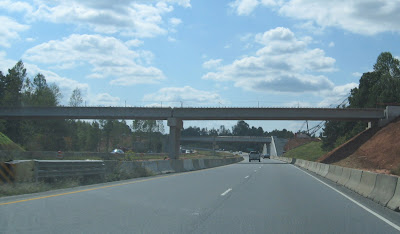 Heading South again And the future flyover ramp bridge for I-74 West: 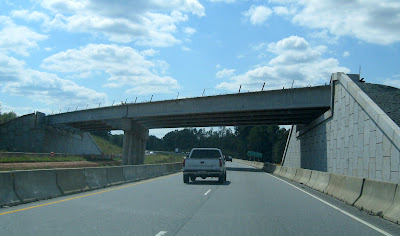 Work on the bridge deck is apparently proceeding as shown by the spread of wood sheeting under the bridge, southbound anyway, to protect cars from falling debris. There doesn't seem to be much progress on the flyover ramp heading back northbound: 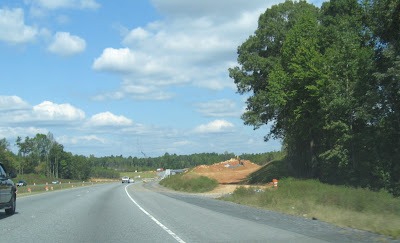 You may also notice something has disappeared, the previous Future I-73 and I-74 signs.
Closer to the ramp bridges, one can see progress in landscaping: 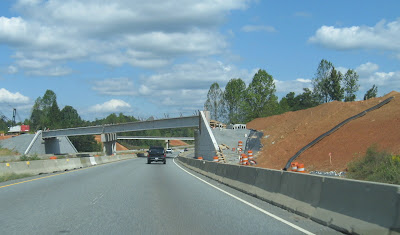 Closing in on the future ramp bridge carrying traffic to US 220 Northbound one can also see progress on landscaping: 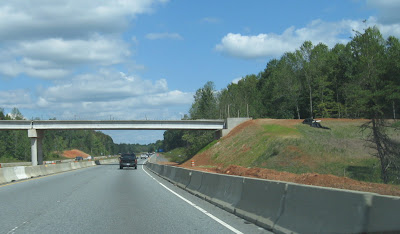 The future 'loop ramp' carrying traffic from I-74 eastbound to North 220 (I-73) can be seen under construction on the right beyond the cement barriers.

I plan to visit the area for one last look on Sunday, October 24 before I move to Massachusetts. I will post any photos showing any significant progress on the blog next week.

Bob Malme said…
NCDOT lists the freeway as 96.75% complete as of the end of October. Local residents inform me that lines have been put down and signs are starting to go up as of 11/5. No notice from NCDOT on an opening day, yet.
2:53 PM

Anonymous said…
Checked with Barnhill Contracting around the middle of April and was told they were expecting to open 74 on May 27th (Memorial Day)
11:01 AM