By Bob Malme October 05, 2010
NCDOT's Construction Progress Report produced a new estimate of completion for the I-74/US 311 freeway between Business 85 and Cedar Square Road on September 20, about 10 days earlier than usual. The report indicated the project was 94.2% complete. Assuming, even with the rainy weather, that this completion percentage was approaching 95% by the first Sunday in October, I took, what I hoped would be, a final trip to the corridor to confirm progress on building the freeway hoping it appeared almost completed (and hopefully to be opened before November, more on that later). What I found was most of the work on the road itself had been completed, with a few exceptions, all that's left to do is some final landscaping, placing covers on the remaining open median water drains, the placement of signs, both overhead and at ground level, and the putting down of lane markings (much of which had been preliminarily marked along the roadway). Here's a summary heading west to east or north to south, depending on whether you prefer to use I-74 or US 311 cardinal directions.

A. The Business 85 interchange
The ramps and roadway leading from the open freeway up to Baker Road have largely been cleaned off, though no interchange signage or lane markings have appeared. Here's the view for where traffic must exit now esatbound: 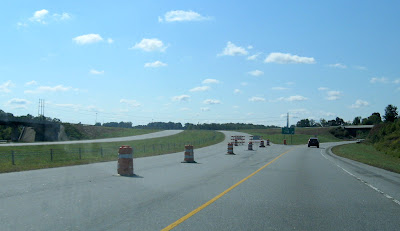 Here's the view looking at the future on ramp to I-74 East from the 'volleyball interchange'. They still need to work on the traffic signals and clean the roadway near the intersection: 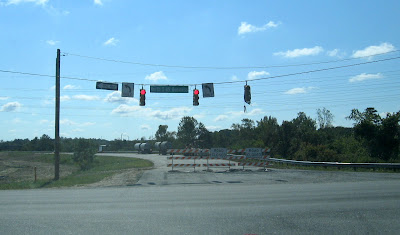 B. Baker Road
The final coat of asphalt for Baker Road has still not been placed, but the landscaping around the bridge appears complete: 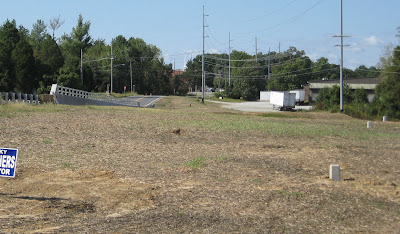 Looking southward, one can see the roadway is almost complete with a few landscaping and drain cover issues still needing to be addressed: 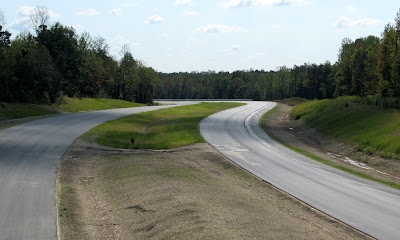 A closer look at the westbound roadway reveals an initial marking of where the shoulder and lane markings will be placed: 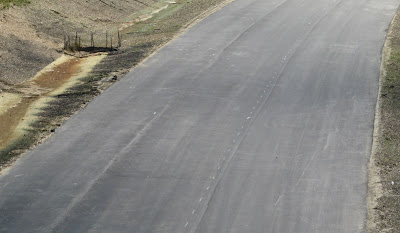 Note there is nothing for the left shoulder, this is the case on most of the freeway that's marked, though in some areas only the left and right shoulders are indicated.

C. Jackson Lake Road
This area appears near completion, sign structures are up and lanes are marked for striping, some landscaping and drainage covers still need work, both looking west/north: 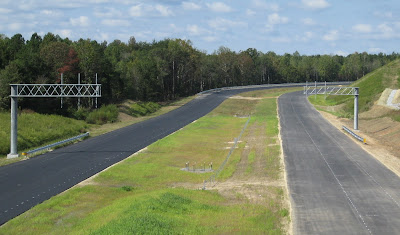 And south/east toward Kersey Valley Road: 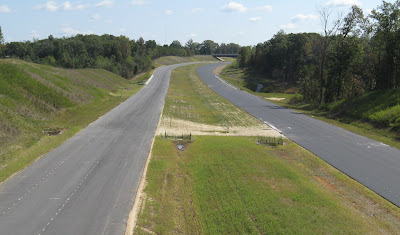 D. Kersey Valley Road
A similar story can be said here. More sign structures have been put up, but the recent rain hasn't helped with the large hill landscaping. First here's a view of the bridge: 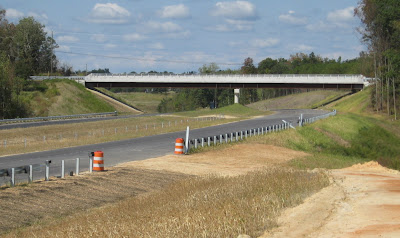 A few more posts for the guardrails also need to be installed, after the construction road is no longer needed. Here's a similar view but including the signage structure for the future 2 mile advance sign for the Business 85 exit: 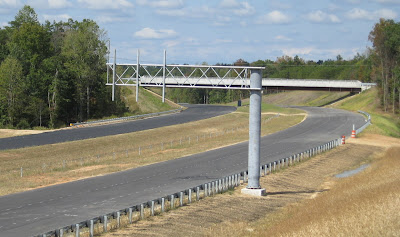 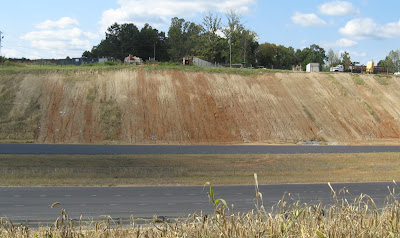 While the drainage system seems to have worked well, most of the top soil put on the embankment has washed away, and will need to be replaced.

E. I-85 Interchange
The interchange as seen from Dresden Road appears completed, or close to being so: 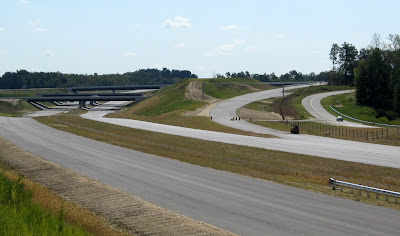 A truck ramp to the eastbound exit off ramp will have to be closed. Meanwhile an overhead sign structure at the splitting of the I-85 north (flyover) and south ramps has been put up. On I-85 itself all the signage has been put up with the I-74/US 311 signs remaining covered: 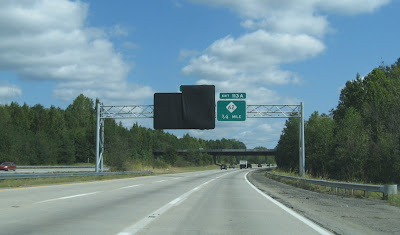 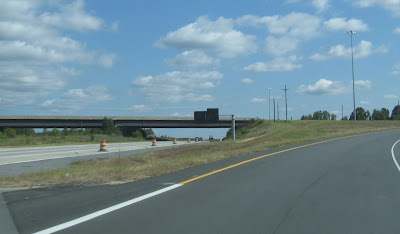 Photo taken from the NC 62 off ramp. There have been no additional signs or sign posts put up yet at the I-85 north on ramp from NC 62 which uses the C/D lanes.

F. NC 62 and Tuttle Road
With the exception of markings demarking future traffic lanes, nothing new was seen at these locations, both seemingly near completion. The landscaping has filled in nicely as seen from both directions on the Tuttle Road Bridge. First, north: 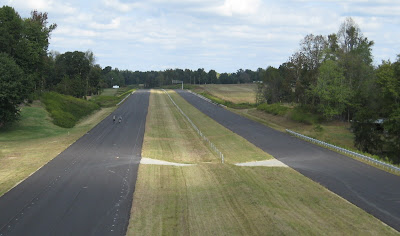 yes, those are bikers heading southbound, and looking to the south: 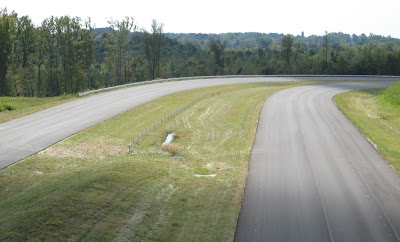 Hard, to spot but you can see median guide wires have been placed here as well. The sign structure seen last month around the corner is still the last one along the freeway heading south.

F. Poole Road
The only change is the completion of the bridge over a creek to the north, it also looks like they repaved this section: 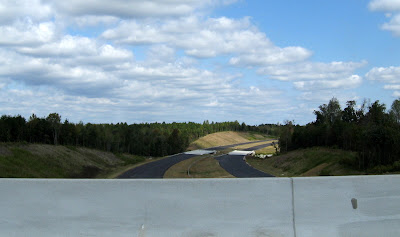 Landscaping also may still be an issue to the north of these bridges. Looking south from the Poole Road bridge shows a scene similar to last month, no pavement markings, or sign structures for the Cedar Square exit seen here, though more guardrails have been installed: 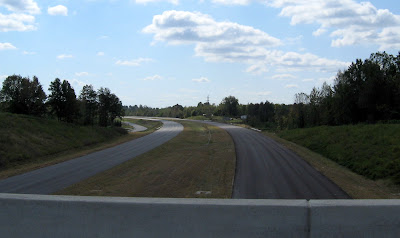 Looking along the freeway that parallels Poole Road, the only real change is the absence of machinery: 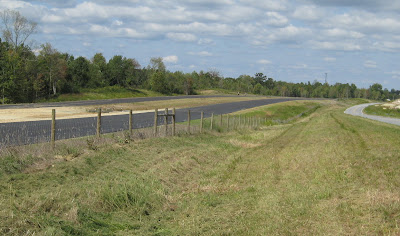 The truck access route from Poole has been closed, so trucks are using the median to turn around to get off the freeway at the Cedar Square interchange.

G. Cedar Square Road Interchange (Temporary End of Freeway)
There has been progress in placing final pavement down for the sections that will be opened to traffic, though as stated before, no signage structures have been put up, nor evidence of signage along Cedar Square at the future I-74 west interchange. Here's a view of the on ramp from the end of Poole Road: 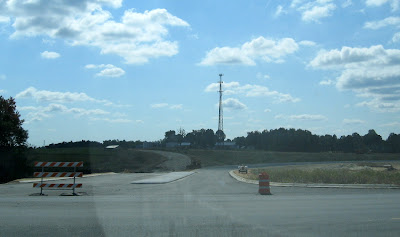 The on ramp is straight ahead. The future off ramp from I-74 East, not paved beyond the cement median, is to the left. Here's a view of the progress in constructing the eastbound off ramp which all traffic will use until late 2012: 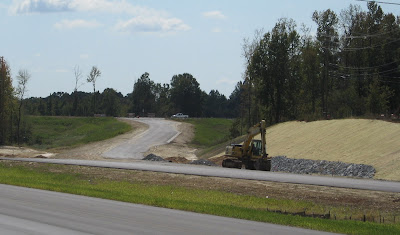 Notice they are still working on landscaping and containing water runoff before the ramp. The view of the ramp from Cedar Square Road shows further need for landscaping: 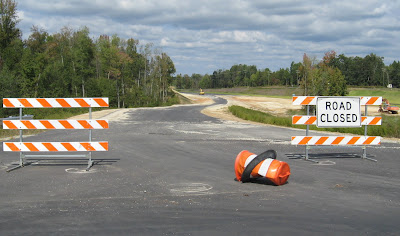 Not to mention replacement of traffic barrels. The view from Poole Road looking south toward the bridge shows the extent of progress in paving the ramps and future westbound I-74 roadway: 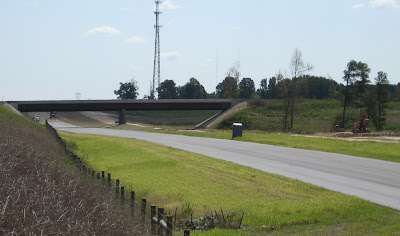 While a view from the bridge looking southward, shows the progress of the westbound offramp and the unpaved sections which are now the responsibility of the Poole Rd to US 220 contractor: 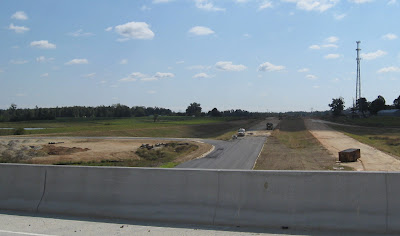 A view from the future Eastbound on ramp shows the extent of the ramp and borrow pit construction: 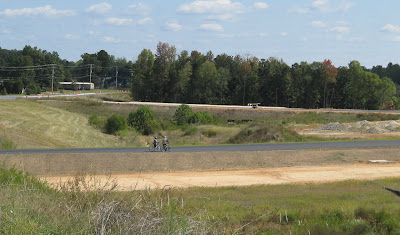 Yes, those are the same bikers again. The official opening date for this segment is still November. Hopefully, though the weather will cooperate, especially when it comes to placing the line markings down. I am moving back to my native Massachusetts at the end of October and it would figure that NCDOT would wait until a couple days into November before opening the road. Especially after all the effort I've made in pointing out their mistakes.

I took photos along the next section of construction from Spencer Road to US 220 and will put those up on another post. I'll certainly have to return someday to take a ride after that section's open. Meanwhile, if there are any others interested in following the progress of the final section of the 311 Bypass, feel free to take rod trips to document it.

Bob Malme said…
According to the news article here:
http://www.hpe.com/view/full_story/9746266/article-Work-progresses-on-U-S--311?instance=main_article
NCDOT hopes to open this segment of I-74 by Thanksgiving. Given the photos showing major completion and dry weather forecast for the next week, hopefully they can finish earlier.
10:33 PM