Could a Diverging Diamond Interchange be coming to Southeastern North Carolina?

By Adam October 26, 2010
It's not every day that a driver gets to legally drive on the "wrong side of the road".  But if a recent NCDOT proposal for the US 74/76 interchange with NC 133 in Leland is approved, Brunswick County motorists will be able to do just that.

The DOT is considering building a "Diverging Diamond Interchange", also known as a DDI, as a replacement of the current and heavily congested diamond interchange when the US 74/76 causeway is widened in 2013.  The DDI is one of a few possible plans for the interchange when the $19 million project begins.

A diverging diamond is unique as the travel lanes on the surface road- in this case NC 133 - are flipped to the opposite side before and after the interchange.  This flip is controlled by a traffic light at each end.  Traffic to and from the interchange ramps also intersect at the signals.

The result is left turns onto and off of the interchange ramps now go unimpeded - that is the driver does not have to worry about crossing traffic in the opposite direction when making the turn.  Also, the only traffic signals needed are the two at the location of the 'flips'.

In 2009, Missouri was the first state to install the 'diverging diamond'at MO 13 and Interstate 44 in Springfield.  A photo of the completed project is below. (Source: Missouri Department of Transportation) 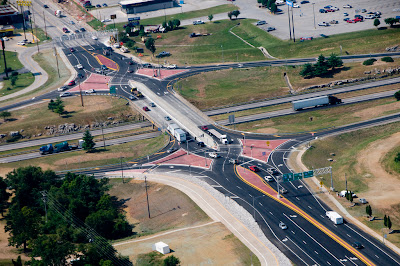 Missouri installed this interchange as it saved nearly $4 million compared to building a higher powered traditional diamond with additional turning lanes.  With NCDOT putting together every possible penny that they can find, the DDI will be a very high possibility.  Missouri also boasts a lower accident rate at the MO 13/I-44 interchange, a reduction of 50 percent.

In addition to cost advantages, the DDI allows for interchanges to remain below capacity longer.  They are maximized if there is a high volume of left turns on a lower speed surface road with space limitations.

There are drawbacks, however.  On the surface route, both sets of signals cannot be green at the same time for both directions.  The flow of traffic will be more controlled and through traffic - in this case on NC 133 - will have to come to at least one stop when going through the interchange.  And of course the obvious concern - motorists who would be confused and unfamiliar with the new traffic pattern.

Since construction of the diverging diamond in Springfield in 2009, a handful of DDI's have been constructed throughout the country.  If this DDI is built in Leland, it will be North Carolina's second constructed DDI.  The first, located on I-77 at Exit 28 in Mecklenburg County, is scheduled to open in 2012.

James Dunlop said…
The one in Leland would be anywhere between the first and seventh DDI in the state. The Cornelius one looks like it'll be sometime in 2013 instead of 2012, and there's three projects in Concord, two on 85 and one on the last new section of 485. These three are actually let to contract, although the Design-Build schedule puts them in late 2013/early 2014.

Another one in Kernersville on I-40 and one in Lumberton on I-95 are being worked on, however their schedule will most likely be behind the others. Right now, any one of these could be the first one completed. I'm betting on the two on I-85 in Concord, based on the construction schedules I've seen. Cornelius could slip in ahead of those, though.

hotrod6147 said…
Was the new bridge at Old Kingsdale Road completed? Was this simply a bridge, or an interchange?
9:48 AM