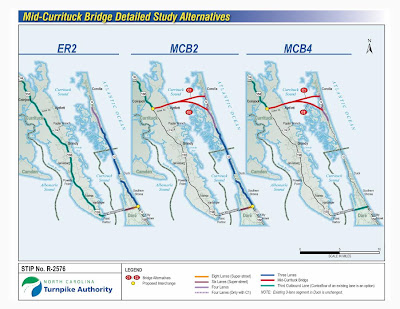 Of the three alternatives that saw the most scrutinization, the NCTA has recommended Option MCB4 to be built.  However, the Turnpike Authority has yet to decide on alignment 'C1' or 'C2' at the eastern end of the bridge.  The eastern terminus of the bridge will be at NC 12 in or near Corolla.  Option C1 lands at the southern end of Corolla Bay and about two miles north of the Albacore Street retail area.  Option C2 avoids Corolla Bay and meets NC 12 about a half mile south of Albacore Street.

In addition, the NCTA has yet to decide on the location of the toll booths on the mainland (US 158) side of the bridge.  The decision on the location of the toll booths has become a double edged sword as potential impacts to Maple Swamp and the Currituck Sound community of Aydlett has cause the most controversy.   NCTA has not released a timeline on when they will make a decision on options 'C1' and 'C2' or the mainland toll booths location.

Also, MCB4 will include the construction of a third 'contraflow' hurricane evacuation lane on US 158 from the bridge northwards to NC 168.  There would also be some widening of NC 12 in Corolla where the bridge ends, but the length of the widening will be determined by the ultimate eastern terminus of the bridge.  Finally, a recommendation to convert the NC 12/US 158 intersection in Southern Shores to an interchange (either a SPUI or compressed diamond) was made.  However, funding at this time is not available for that project.

The Turnpike Authority will be hosting public hearings on the DEIS in May.  The schedule for the meetings is as follows:
Each hearing will begin with an open house starting at 3:30 pm, immediately followed by the public hearing at 7:00 pm.

The new target completion date for the bridge is now late 2014.

Da-ud said…
Wouldn't a rotary at the US 158/NC 12 intersection be less environmentally intrusive than an interchange?
9:54 AM