By Bob Malme April 11, 2010
As Adam indicated in his previous photo post, we were out Saturday (4/10) checking on the progress of the Triangle Expressway, the Future Toll portions of NC 540 and NC 147. The trip went in the opposite direction as before, so this progress report will start with...
1. The Western Wake Freeway (NC 540):
As seen from the current end of NC 540 looking west, there has been some substantial work on grading the road and the start of installing bridges since our last visit in February: 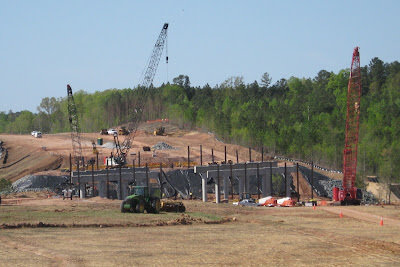 Both cement and steel bridge supports can be seen. They have piled the material needed for the next bridge project on the median between the unopened lanes of NC 540: 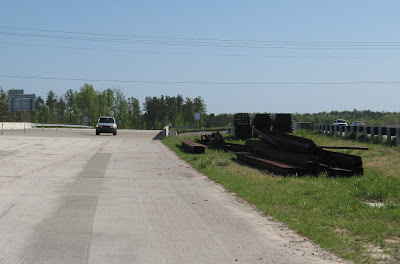 The first major road closure will occur tomorrow (4/12) as explained in this message sign: 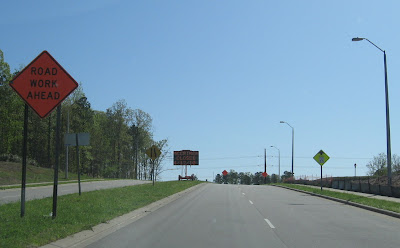 McCrimmon Parkway will be closed as a bridge is put in to take the parkway over the freeway.
Here's a view of what they will have to remove: 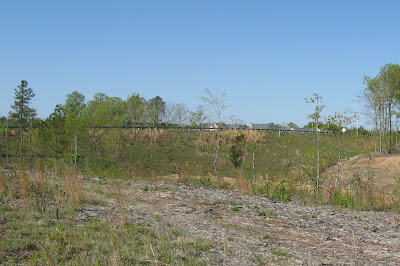 The parkway is behind the guardrail. The photo was taken from the edge of the Panther Creek High School stadium access road. The stadium bleachers will have a good view of construction, and of the toll road traffic, after completion. Here's the view looking toward NC 55 from where the Parkway bridge will be constructed: 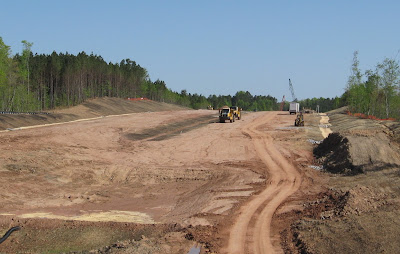 As you can see on the left, there has already been a start to landscaping the highway. The tracks to the right are how contractor vehicles enter and leave the roadbed (with drivers to busy to return a wave). The photo below looks the other direction, south of McCrimmon Parkway: 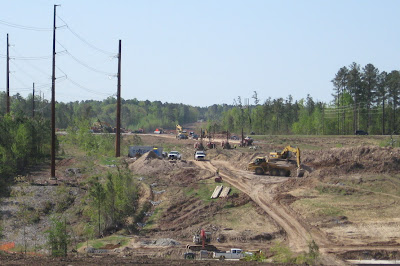 It appears they are starting bridge construction along the highway in the distance. The cement slab at bottom right is part of a culvert they are building, closeup photo below: 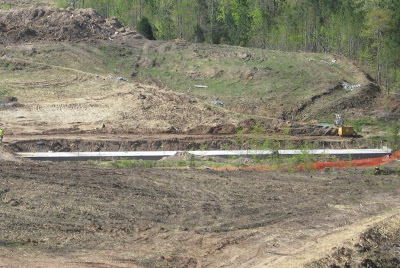 Since last February, construction, has proceeded across Carpenter Fire Station Road in Cary and further south toward US 64. The photo below is looking south along Carpenter... 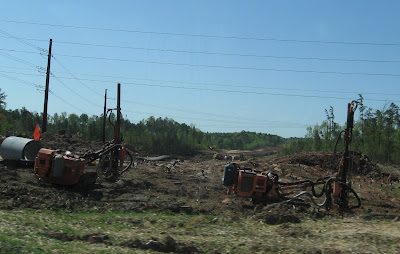 Here's a view to the north: 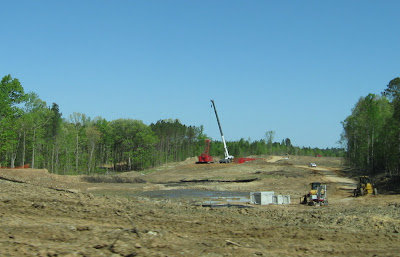 As construction moves along, we have tried to find parking areas that are best to observe the construction. The newest one we found is the parking lot for the relatively new USA Baseball complex, here's a photo of the future toll road taken walking from the parking lot to within the toll road's right-of-way: 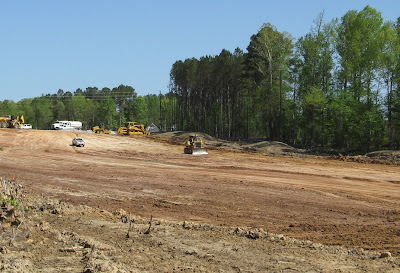 While most of the construction ends about here, around the curve behind the hill of dirt... 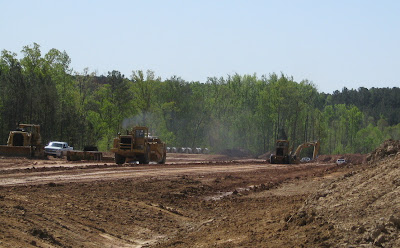 Clearing continues south past Green Level Road East where the contractor has cleared enough space for an office trailer and parking lot for employee vehicles. This is where the first interchange south of NC 55 will be built. The most interesting items in this area are that some houses have not been cleared but are apparently being used by the fire department for training exercises. Here's one that's been mostly burned down: 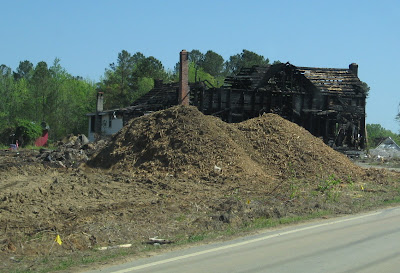 The tree clearing stops south of Green Level, a little more than a mile north of US 64, the next major route to be affected by the West Wake Freeway construction.

2. The Triangle Parkway (NC 147)
We saw less progress here than on the NC 540 portion, surprising, since this section is only 3 miles long and is supposed to be complete next year. There were some signs of progress at the southern end, as seen below from the current NC 540 Davis Drive offramp: 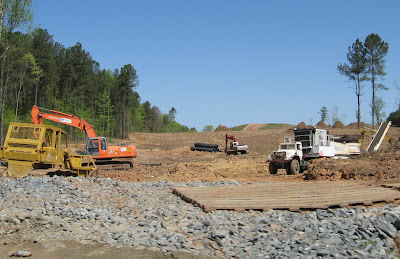 Some initial construction work and clearing has gone north of here. You can view additional clearing that has taken place south of Davis Drive as it curves back toward Hopson Road: 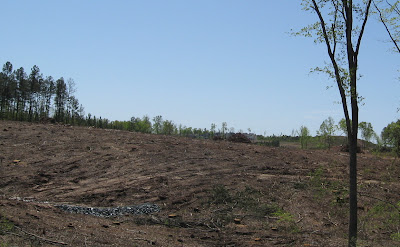 However, little progress can be seen to the north as viewed from the future Hopson Road bridge and interchange: 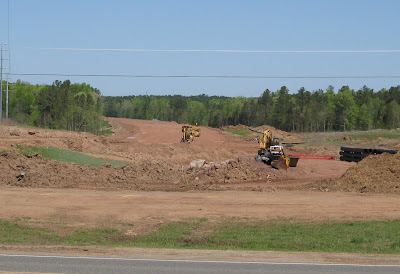 Which appears similar to the photos of the area taken in February, except that one of the construction trailers has been moved. A clue to the lack of progress may be seen south of Hopson... 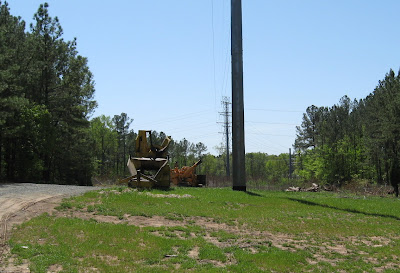 Where currently the high-power electric transmission poles and lines appear to be in the future parkway's right-of-way. Whether this is according to schedule, or is due to a delay in talks with the power company, is not known. Any lag in progress here may threaten to delay the planned opening date of 2011.
They are making progress at the northern end where the current NC 147 meets its future pathway: 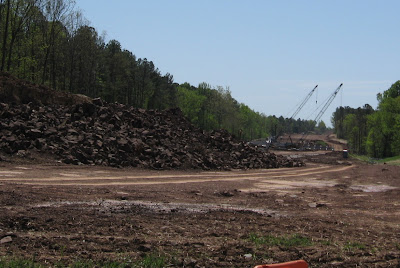 The grade has been cut down to meet the current roadway and it appears work on a culvert is starting where the two cranes are located. There is also construction starting along current NC 147 southbound by the I-40 interchange. I will try to find out whether there is any problems that would cause a delay in constructing the parkway before the next update in late May.