I-40 and I-440 Signage Changes Around Raleigh

By Bob Malme April 05, 2010
I promised in my earlier post that I'd put additional photos in a future entry regarding signage changes along I-40 in Raleigh. These changes are taking place with the re-designation of I-440 as an East-West route across the top of Raleigh and its discontinuance on I-40. NCDOT had a press release last week saying they had completed the I-440 re-signing. Here are some photos taken in January showing examples: 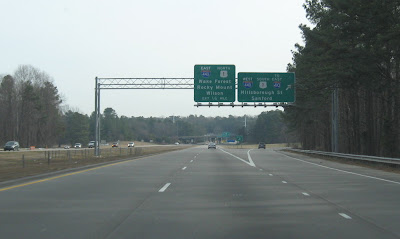 This is on Wade Avenue approaching the I-440 interchange, the previous 'Inner' and 'Outer' designations have been replaced by 'East' and 'West.' 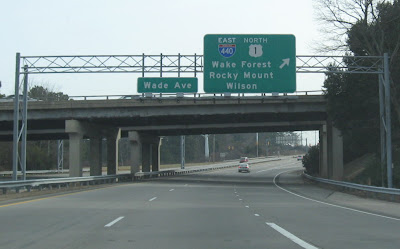 Here's a closeup of the second sign in the interchange. Another 3 control city sign. The trivia about this sign is that only 1 of the cities (Wake Forest) does either of these routes go to. The other destinations might be more appropriate on a I-40 US 64 sign, since you need to get on 64. 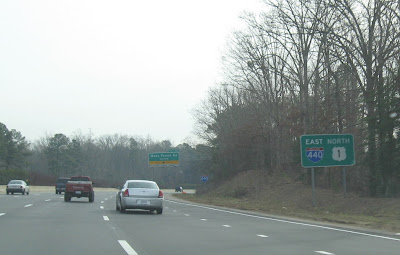 This is signage along the roadway itself, all that was done here is place an 'East' panel over the I-440 shield.

Now for sign changes on I-40 itself. I took a detour further east on I-40 from I-440 East down to Jones Sausage Road (brief pause for any snickering) and back to see signage on I-40 West approaching the Beltline. The first sign is: 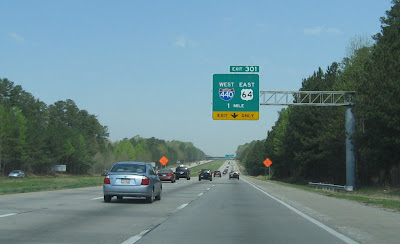 The construction signage does not relate to the signage project but an ongoing paving job on I-440. Notice the lack of control cities. A 1/2 mile further this is the next sign: 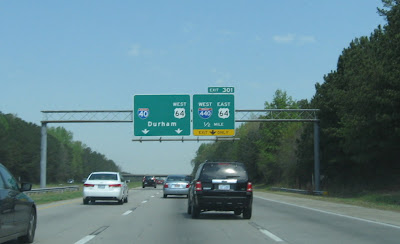 This sign assembly has both a new sign for I-40 and a revised sign for I-40, notice the only control city is Durham. Is this to help or warn drivers? It's the same for the next signs assembly as seen in the previous post: 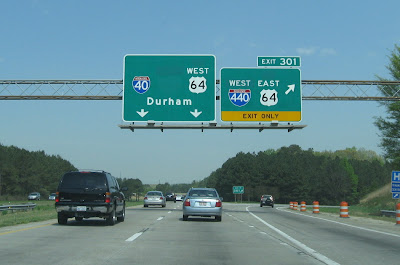 They've left the previous ground signs telling people to use 440 for north and east Raleigh and I-40 for south and west Raleigh, but an overhead sign might be more helpful. While these are definite changes from the previous signs, not all has been changed along the I-40 portion, like: 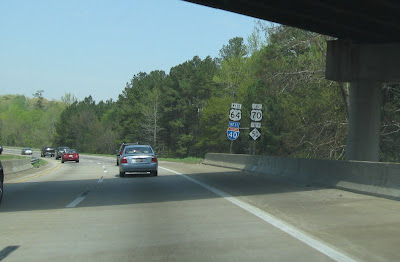 This assembly I assume has been there since I-40 was connected to the Beltline and has survived several route changes, additions, and now subtractions. How long will it remain?
As for the signing of I-40 after the merge, there are new I-40 and US 64 signage: 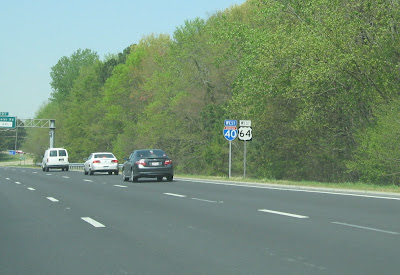 These are new signs, but they don't follow the recent NCDOT practice of putting route shields with more than one designation on green signage. Maybe this contract has been put off for so long it still was using the old specifications. As for the rest of I-40/US 64 there have been some new signs, but, at least westbound, not too many. The signage where I-40 meets I-440 again has not changed.

I also took some photos related to the I-40 widening project in Cary which begins at the end of West I-440 and continues to Wade Avenue: 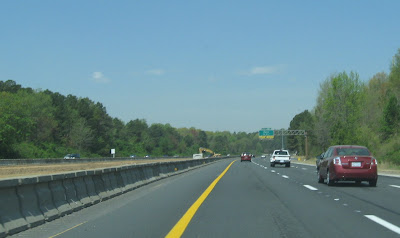 Barriers have been placed to protect workers in the median and bringing the new lanes down to grade has begun. To speed up the process NCDOT's contractor is using a conveyor system: 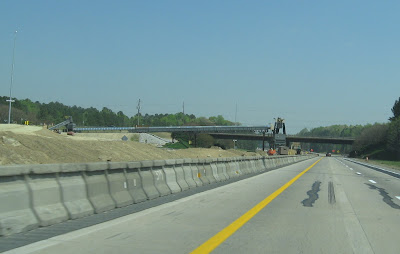 To take the dirt and rock from the median over the highway to awaiting trucks. Another conveyor belt will take asphalt to the site when the roadbeds are completed. It appears workers are concentrating their efforts now between Wade Avenue and the NC 54 exit due to the presumed convenient location of the porta-potty: 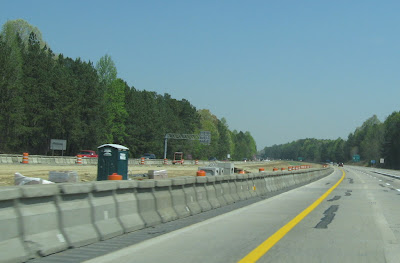 This design-build project is supposed to be completed by the end of June 2011. If you would like more information go to the official NCDOT site at: http://www.ncdot.gov/projects/I4744/