By Bob Malme April 12, 2010
Apparently not having seen enough construction on Saturday, I traveled to Winston-Salem and back to check on the progress of building the US 74/US 311 freeways near High Point.

1. High Point 'East Belt'
A. Open Portion
Why did I start in Winston-Salem. Part of the contract for building the 'East Belt' portion of I-74 (from now former Business 311 to I-85) calls for updating signs to include I-74 (the plans indicated full interstate, but it may now be Future) and the placing of I-74 mile markers along the already opened portion of the road to Business 85. I was checking to see if there were any indications this was happening, which would mean the route is closer to opening than NCDOT has announced, by the end of the year. The only change on the existing road I could find though were to the overhead signs at the now former Business 311 interchange heading east (Exit 65). Both signs, except for the exit tab, had been removed: 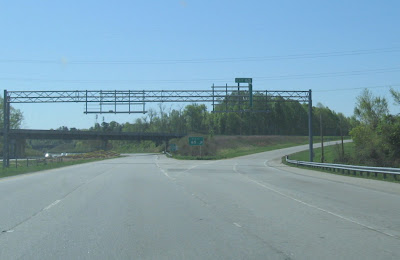 The sign on the left read 'To NC 68'. It turns out though that these signs were blown down a tornado that passed over a week or so before. Thus NCDOT will have to decide to replace them as they were or replace them by updated signs, such as an East I-74/South US 311 sign with control cities at some future point. The Exit 65 sign before this one, since the removal above was not due to NCDOT, at 1 mile had not been replaced and still referred to Business 311.

B. Under Construction Portion from Business to Interstate 85
Baker Road Bridge-As my last post indicated the bridge had been opened but there was no progress on removing the temporary highway to the north. Well, there has been some progress in the last month: 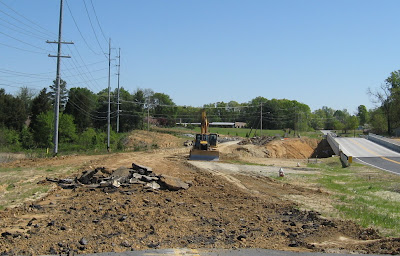 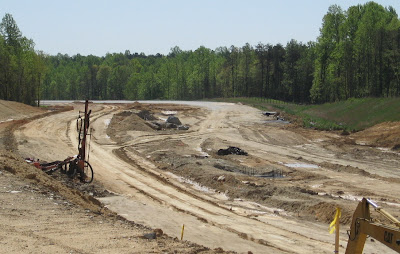 The paved portion where the road curves continues eastbound to the Jackson Lake Road bridge. 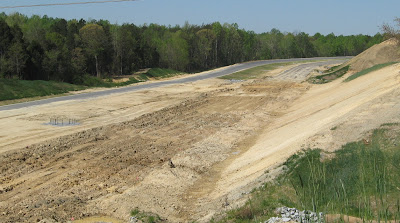 Looking from Jackson Lake Road, most of the dirt from the former hill in the westbound lanes has been pushed up the embankment on the right and is being prepared for final landscaping. Looking eastbound toward Kersey Valley Road, it appears most of the work is complete: 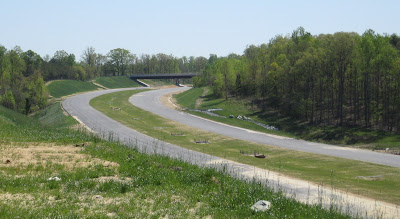 Guardrails and drain covers are still needed, but most of the landscaping is done. Here is how the Kersey Valley Road bridge looks from the south: 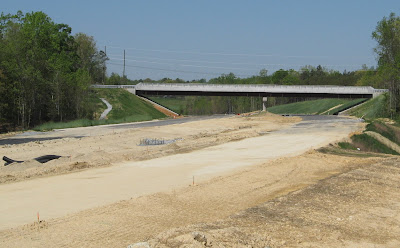 The roadways appear graded and they have started initial paving toward I-85 along the future eastbound lanes shown on the left side of the photo in the middle. This is a better view of what progress has been made: 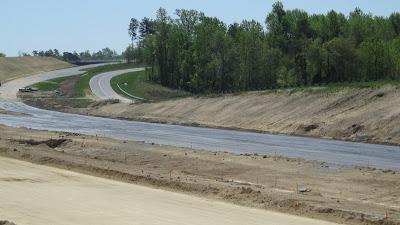 They've tied the new pavement on the EB I-85 ramp to the existing pavement. Landscaping though and more paving has to be completed here. The view of the I-85 bridges also shows progress in the last month: 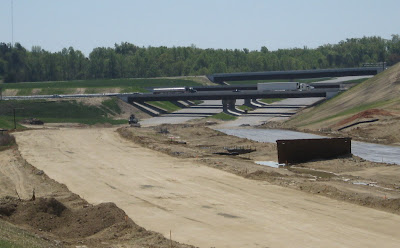 Grading appears almost complete and the asphalt layer in the eastbound lanes continues almost to the bridges. The contractor has been closing lanes and ramps on I-85 in this area for the past 2 weeks to put new lane striping on I-85, for paving the NC 62 exit ramps, and for putting up overhead sign supports: 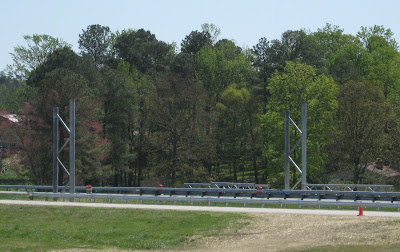 Whether this means the re-opening of the main I-85 lanes is imminent is not known, the NCDOT construction progress report still says this will happen in June. Work on the exit ramps continues... 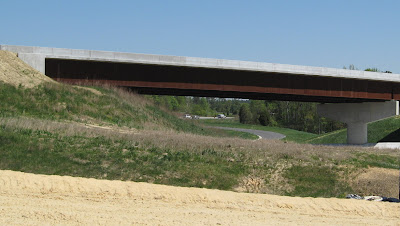 The flyover ramp from I-74 East to I-85 North above looks complete, however, it doesn't appear paving has been completed on the section of the ramp from the bridge over I-85 to the flyover ramp... 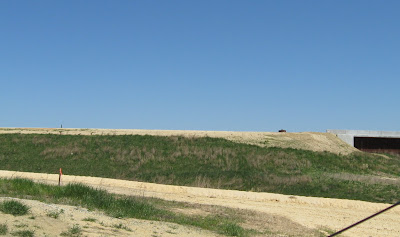 Presumably, guardrails will be added when the paving project is completed.

2. '311 Bypass' I-85 to US 220
A. First Phase portion-This part of the freeway is being built at the same time by the people doing the remaining East Belt construction. The roadbed near the I-85 interchange appears mostly complete: 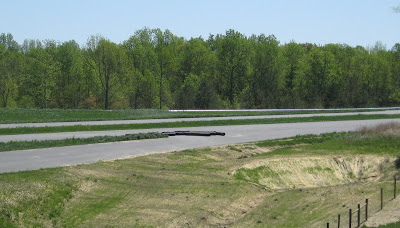 Most of the work in this section over the past month seems to be concentrated on the placing of a final asphalt layer on the roads that cross the future freeway. The paving and lane striping of Tuttle Road across its bridge has been finished: 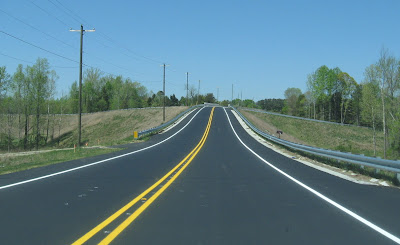 Similar work has been done along Poole Road and on Cedar Square Road. The final non-highway bridge that needed construction has been completed, as can be seen in this photo from the Poole Road bridge: 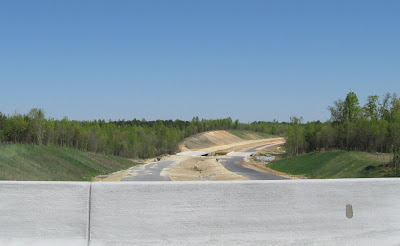 As can be seen though, little or no further work on paving the freeway has occurred either to the north or south of the bridge: 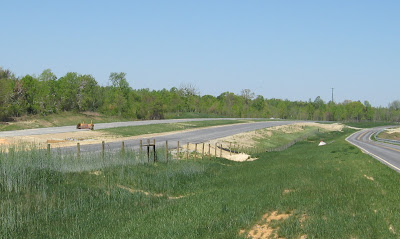 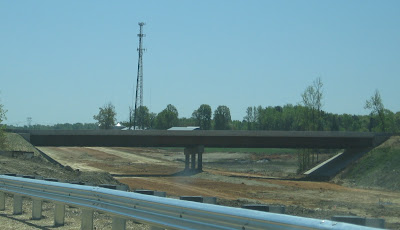 Work has been done on grading the route where the old alignment of Cedar Square was torn down. There, has not been much work on the interchange ramps, however: 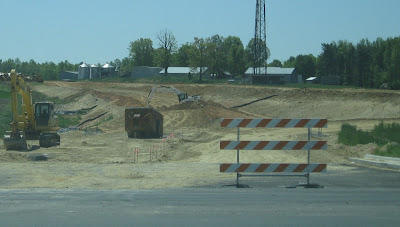 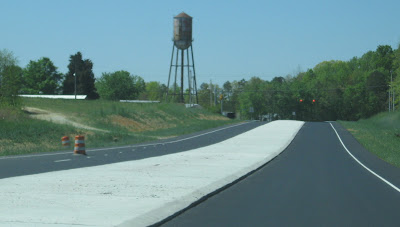 The water tower in the background is either being replaced or augmented by a new bigger water tower further south on US 311 which has a big 'Welcome to High Point' logo on it. I suppose they hope people will see it from the new freeway.

B. Phase 2
The second phase of construction runs from Spencer Road, 1/2 mile south of Cedar Square, to US 220. This is a design-build contract where work started in late 2008. The major feature of this segment will be an interchange with current US 311 in Sophia and the interchange where I-74 will tie into I-73 (US 220) near Randleman. There is little more than clearing going on at the Sophia interchange so far: 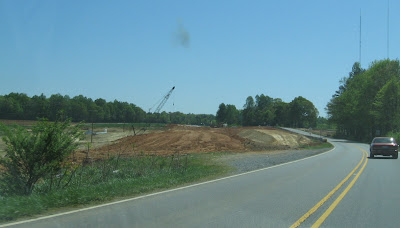 Most of the clearing seems to have been done, seen from US 311 South, the crane indicates the start of some infrastructure construction. There are more interesting things to see on US 220: 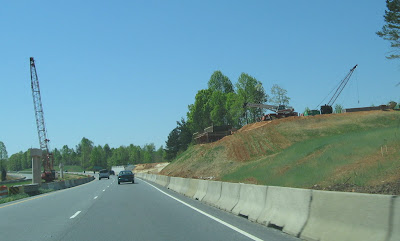 Traveling southbound, they are now putting structures in for the I-74 bridges on the right side, the first one is mostly metal and will lead to the I-74 west lanes that are being graded in the vicinity. The second structure is mostly cement and this will take traffic from I-74 east to I-73 north: 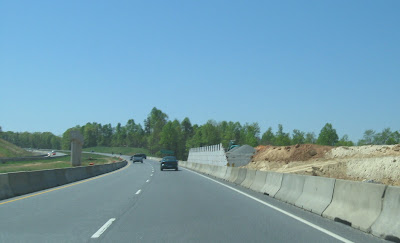 This will be a lower bridge, the ramp to I-74 west will be a flyover and go both over US 220 and the other bridge. This requires building a large mound along northbound US 220 for the ramp to the flyover, seen below from the southbound lanes: 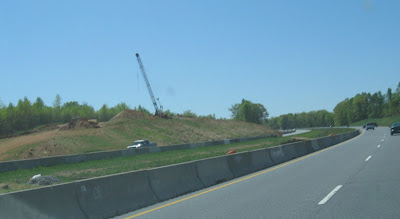 One can barely see the top of the future ramp when traveling along in the northbound lanes: 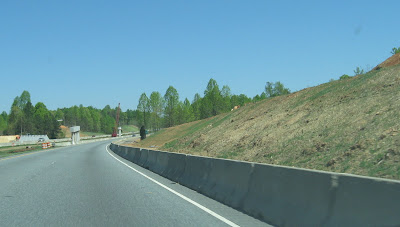 Here's a wider view of the construction scene as viewed going northbound on US 220: 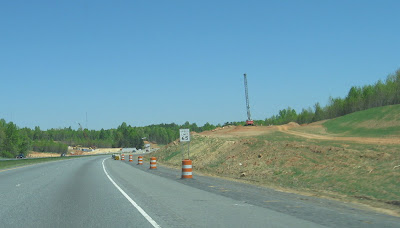 The first phase and East-Belt construction are 86% complete as of the end of March according to NCDOT, the contractors having completed over 3 1/2% of the remaining construction during the month. At this pace the route from Business 85 to Cedar Square Road could be done by the end of July. I will return sometime in May to see if this prediction is still possible.

Anonymous said…
Signs for 311/Main St in High Point were blown down in last week's tornado. It should be interesting to see what they are replaced with.
12:26 PM

Bob Malme said…
Thanks for the information. I have revised the comment regarding the missing Exit 65 signs in light of the new information.
5:52 PM