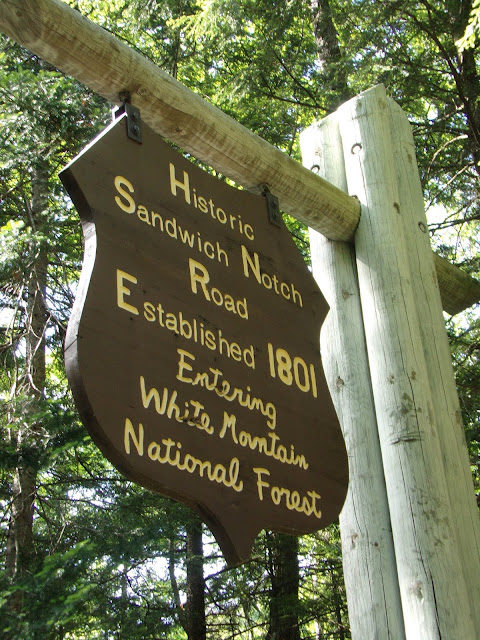 Given its long standing position in American history, New England has its fair share of historic thoroughfares. Many of you are likely familiar with the Boston Post Road linking Boston with New York City, while others may know of the Bayley Hazen Military Road in northern Vermont. In the scenic White Mountains, the historic Sandwich Notch Road was at first a trading route in early 19th Century New Hampshire, linking Thornton and the Waterville Valley area with the town of Sandwich, and ultimately towards southern New Hampshire using roads of its day.

After the families of the Sandwich Notch had moved away, the land sat empty for many years until it was bought up by lumber companies and during the early 20th century, the Beebe Valley Railroad was constructed up the Beebe River Valley from Campton to Sandwich Notch to get the lumber out to the sawmills for production. In 1942, the railroad tracks were taken out and a portion of the land was sold to the White Mountain National Forest. During the 1970s and 1980s, there were concerns that the land around Sandwich Notch would be developed into condos and other vacation residences. As a result of conservation efforts, a successful campaign to "Save the Notch" was successful and led the owner to sell most of the remainder of the land to the White Mountain National Forest. Today, the entire length of the Sandwich Notch Road is along protected private property as well as local and federal government land.

Today, the Sandwich Notch Road is a 9 mile road that runs between NH 49 in Thornton to Center Sandwich. For the most part, it is a slow, rough and at times steep dirt road that meanders through the forest, with ample hiking opportunities and some scenic views of the White Mountains along the way. While I had no issues making my way up the road from south to north in low gear in my SUV, the Sandwich Notch Road could be difficult for some vehicles that are low to the ground.

Unknown said…
I was disappointed by the lack of Sandwiches.
11:46 AM

Anonymous said…
This road is notchust for sandwiches.
3:46 PM