By Challenger Tom January 08, 2019
Vineland is a small ghost town located in southwest Orange County, Florida near the junction of Florida State Road 535 and Interstate 4.  Vineland is somewhat unique due to it largely being squeezed out of existence by Lake Buena Vista which is the company town where Disney World is located. 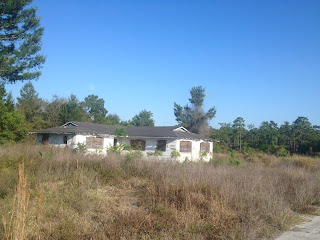 The end of Vineland came as the Disney Corporation began purchasing parcels of citrus grove land to build Lake Buena Vista.  Vineland fell into a sharp decline in the 1960s but the community managed to continue to exist to modern times.  Much of the street grid of Vineland still exists east of FL 535 but most of the original structures are either gone or fallen into ruin like the one above.  Of note the 1950 7th Street School still stands and is in a fairly good state of repair. 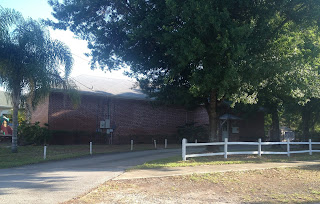 The futuristic vision of Lake Buena Vista as a new age city never came to pass and now exists as one of the odd company based incorporated Florida Cities.  Disney World opened in 1971 but somehow the community of Vineland has remained outside of grasp of Lake Buena Vista.

Joseph said…
Apopka-Vineland Rd is the most prominent existing acknowledgement of the town.
11:53 PM