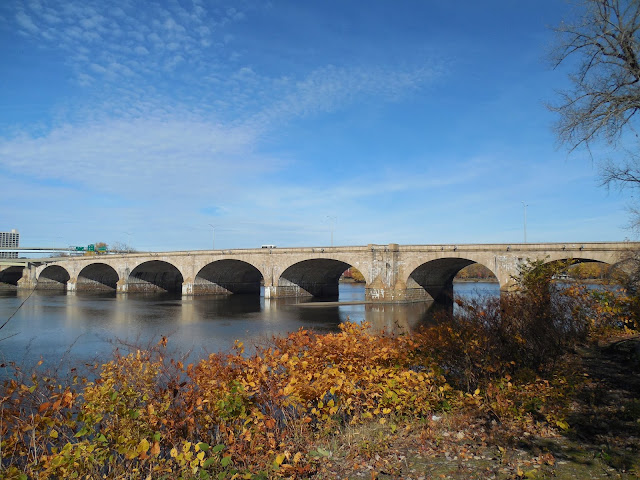 Hartford, Connecticut. Insurance capital of America. Last long term stop in Gordie Howe's illustrious professional ice hockey career when he played for the Whalers. But did you know that the Bulkeley Bridge, which I-84 uses to cross the Connecticut River into downtown Hartford is one of the oldest bridges in the Interstate Highway System and is named for a man who has his own storied place in the history of insurance, professional sports and Connecticut politics?

Each and every day, over 140,000 drivers pass directly over one of New England’s most important architectural and engineering treasures. Most are daily commuters who see only red taillights, tandem trailers and merging traffic. From the roadway level, drivers on I-84 can’t see the nine graceful granite arches they pass over as they cross the Connecticut River on the Bulkeley Bridge. In fact, due to a series of levees and the location of other highways, the most dramatic views of Connecticut’s most unique bridge have been obscured for decades. 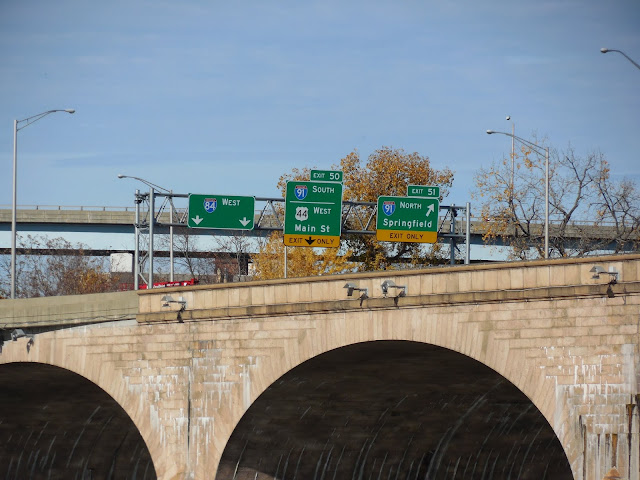 Hartford’s civic and business leaders were determined that the new bridge would be an ornament to the city which should endure forever. To create a proper setting, the bridge commission tore down rows of tenements and constructed wide, landscaped approach boulevards on both sides of the river. In designing the bridge, the architect and engineer studied numerous ancient European bridges, and they decided that uncomplicated geometry and restrained architectural detailing would create the proper sense of strength, beauty and dignity. At a time when various steel truss and suspension bridge designs were in vogue, the decision to use the more traditional stone arch method was in large part aesthetic. However, stone arch bridges are also stronger and last longer, never rusting or needing repainting. The Bulkeley Bridge’s tremendous scale, plain but graceful lines, arched form, and simple classical ornament make it one of Connecticut's key examples of Neo-Classical architecture.

In 1903, work started on the new stone arch bridge at the site. Several buildings were razed on each riverbank to create wide, landscaped approaches. At a total price tag of $3 million, it was the most expensive bridge in Connecticut, costing a half million dollars more than the state capitol building itself. Constructed from over 100,000 cubic yards of grey and pink granite, each 10 ton block was cut to remarkable tolerances of within 3/8ths of an inch. Its nine spans were 1192 feet long in total. Its graceful stone arches spanned up to 119 feet each, longer than any others in the state. The bridge’s foundation averaged 50 to 60 feet in depth. 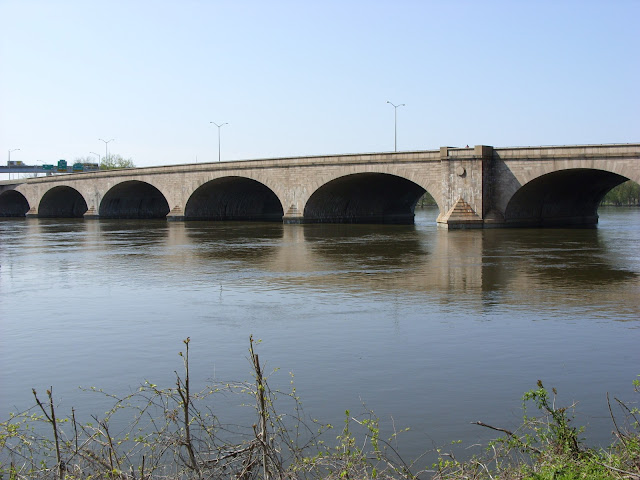 All of Hartford turned out to celebrate when the bridge finally opened on October 6, 1908. The Hartford Courant reported that over 10,000 marchers including several thousand flag waving school children, floats, speeches, sermons, re-enactments of the founding of Hartford, and fireworks were all part of the “Bridge Week” celebration. The most recognized participant was Senator Morgan C. Bulkeley, president of the bridge commission. It was simply called the Hartford Bridge until 1922, when Morgan G. Bulkeley passed away and it was renamed in his honor.

The bridge at the time was a city street, connecting Hartford Avenue in East Hartford to Morgan Street in Hartford. Hartford Avenue is now Connecticut Boulevard. Morgan Street still exists, but is split in two and is literally overshadowed by I-84. As horse and buggy gave way to the automobile, the Bulkeley Bridge became the most important vehicular span in the state. Following a pair of horrific floods in 1936 and 1938 a series of levees were constructed along the banks of the Connecticut River, beginning Hartford’s retreat from the waterfront and partially obscuring views of the bridge. Until 1942, the Bulkeley Bridge was the only motor vehicle bridge across the Connecticut River between Warehouse Point and Middletown, and handled a number of different routes: US 5, US 6, and US 44, along with CT 17 and CT 101. An east-west expressway near downtown Hartford had been planned since the 1940s, which would eventually become Interstate 84. After several alternatives were discussed, it was decided that I-84 would use the Bulkeley Bridge to cross into East Hartford. In 1964, the bridge was widened to eight lanes. 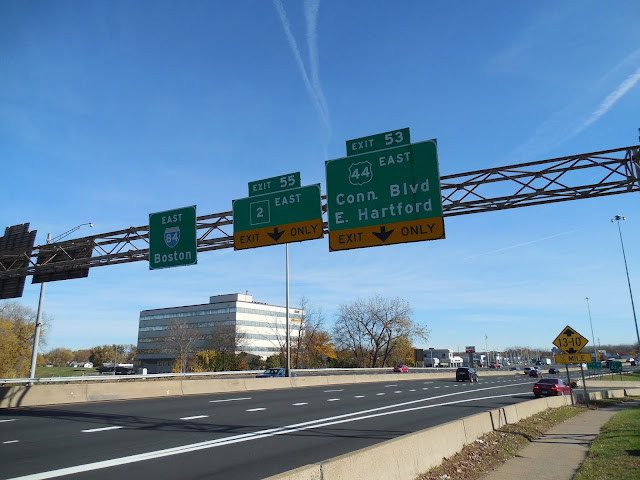 In more modern times, you can actually enjoy the aesthetic nature of the Bulkeley Bridge from nearby parks on both banks of the Connecticut River, and there is even a sidewalk on the south side of the bridge to help you get between Hartford and East Hartford. Hartford’s River Recapture project has helped to change that, at least for those who venture off the highway and onto the pathways that now line the banks of the Connecticut River north of the new Convention and Science Centers. Riverside Park on the west bank and Great River Park to the east include paved walkways from which one can best view the one hundred year-old span. The Bulkeley Bridge is truly a wonderful bridge to cross and is certainly worth admiring for its engineering beauty and detail. 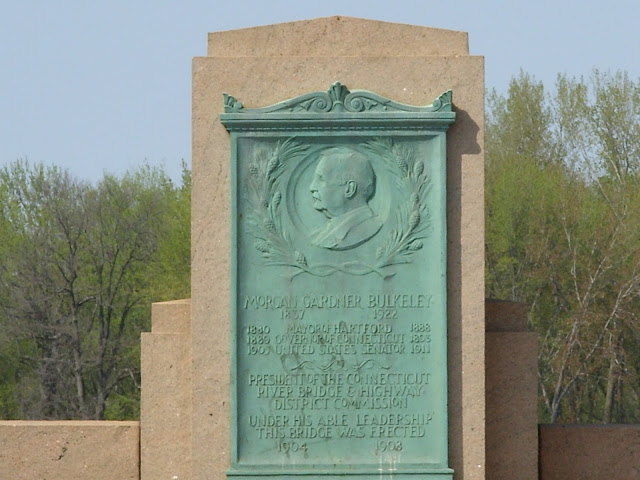 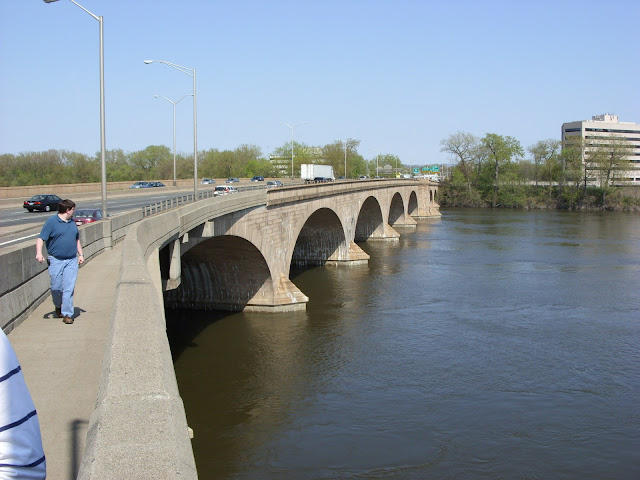