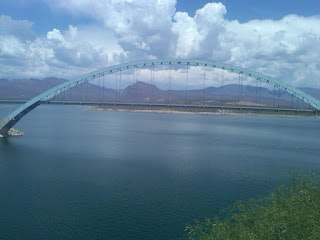 AZ 88 is one of the oldest State Highways in Arizona dating back to 1927.  While the highway was originally intended to be signed as AZ 66 the designation of AZ 88 was ultimately chosen due to US 66 being assigned over what was intended to be US 60 in Arizona.  As originally signed AZ 88 stretched from US Route 80 in Apache Junction east to the first US 180 in Globe.  By 1927 Roosevelt Dam was long completed since 1911 as it was the signature structure of the Salt River Project.  Roosevelt Dam was used as a bridging structure from AZ 88 north to the road to Payson.  This 1927 highway map of Arizona shows the location of Roosevelt Dam on the initial alignment of AZ 88. 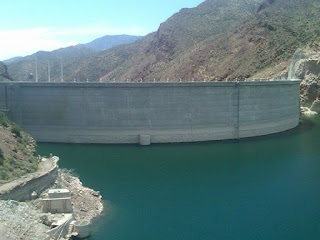 According to Arizonaroads.com the route of AZ 188 from AZ 88 at Roosevelt Dam north to Payson was designated in 1958.  At the time the junction of AZ 88 and AZ 188 was at Roosevelt Dam.   AZ 188 can be viewed in it's originally configuration crossing Roosevelt Dam on the 1961 State Highway Map.

bridgehunter.com on the Roosevelt Lake Bridge

According to Arizonaroads.com AZ 188 was shifted over what was AZ 88 east of Roosevelt Dam to Globe by 2000.  The change was apparently instigated due to a new ADOT policy about having a highway have both terminus points at the same route.