California State 203; the road that could have been a Trans-Sierra Highway 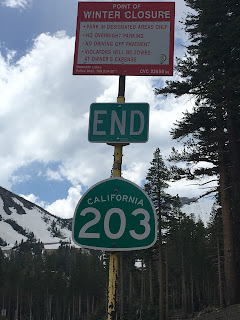 My final route of the 6th was California State Route 203.

CA 203 is a 9 mile state highway entirely in Mono County running from US 395 west to the Mammoth Ski Area.  Despite CA 203 being an extremely short route it has a really unique history.   I approached CA 203 from US 395 southbound and headed west towards the Mammoth Ski Area.  Devil's Postpile National Monument lies beyond the western terminus of CA 203 but it was closed in July 2017 due to winter storm damage. 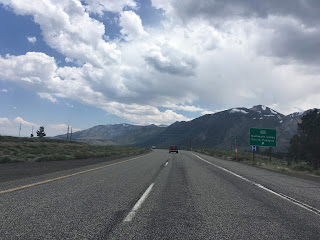 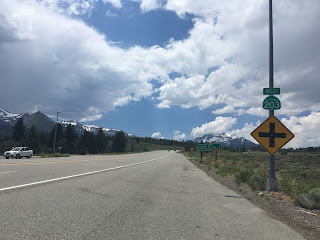 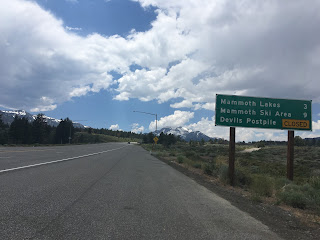 CA 203 is a four-lane road from US 395 west to Minaret Road in the City of Mammoth Lakes (Mammoth).  CA 203 westbound takes a right turn on Minaret Road. 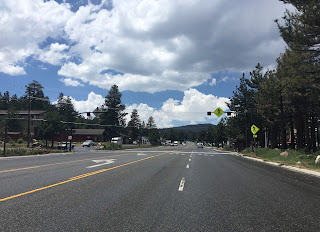 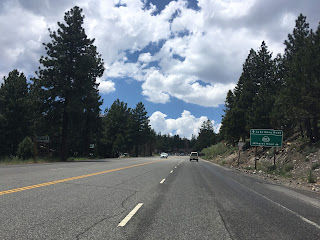 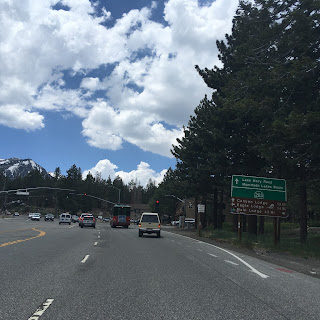 CA 203 westbound crosses through downtown Mammoth before starting the ascent to the Mammoth Ski Area. 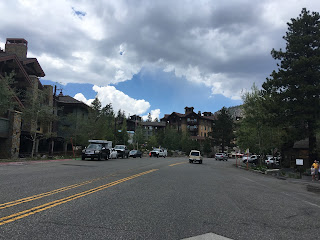 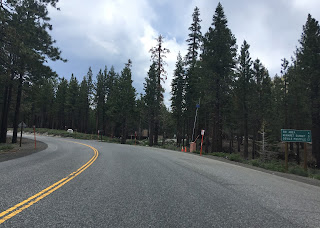 CA 203 has a major junction with the Mammoth Scenic Loop.  Interestingly the "Mammoth Scenic Loop" was originally called the "Mammoth Escape Route" which was built after the 1980 Long Valley Earthquake.  The Escape Route was built for an additional way out of Mammoth if there was some sort of disaster on the Long Valley Caldera.  Apparently (total conjecture I've heard in passing) the name was changed because the business owners in Mammoth didn't like being reminded they live atop a volcano. 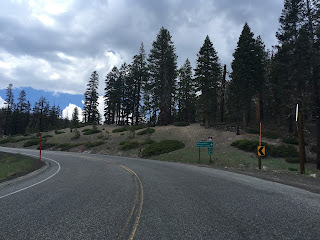 Despite what the advisory signs might say the climb to the Mammoth Ski Area and Madera County line is actually very tame which is odd for the Eastern Sierras.  I would venture the signage is so strict due to CA 203 staying open for ski area access in the winter. 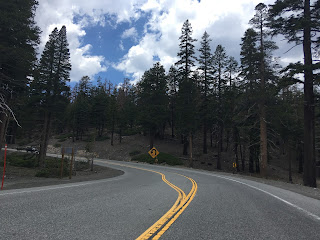 CA 203 ends a mile or so east of the Madera County Line with Mammoth Mountain in view. 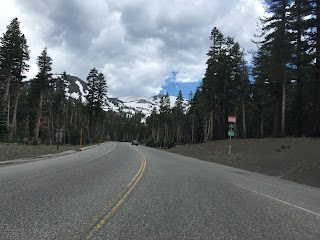 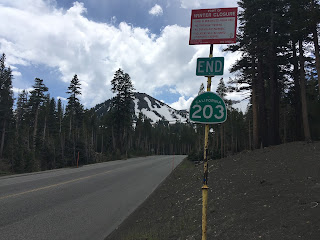 There was still a copious amount of snow despite it being early July. 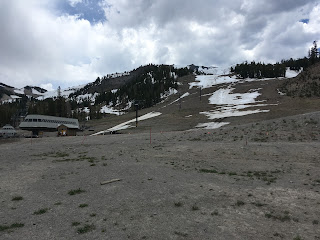 End of the line at the Mammoth Ski Area.  Traffic wasn't even allowed to proceed west to Minaret Summit which was a shame. 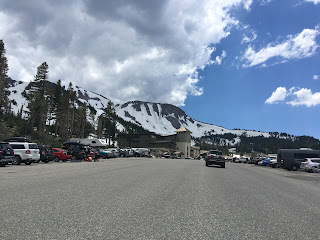 CA 203 was originally unsigned Legislative Route Number 112 before the state highway renumbering in 1964.  The route was also substantially different than modern CA 203 with the route running to what is known as "Old Mammoth" in the city of Mammoth Lakes where it terminated at Lake Mary.  Essentially the original alignment of LRN 112 appears to have used:

1.  An unnamed dirt road east of the modern US 395 expressway on the roadway known as "Old Highway" which was once US 395.
2.  On the west side of modern US 395 Mammoth Creek Road west to Old Mammoth Road.
3.  Old Mammoth Road through what is the original town site of Mammoth.
4.  Lake Mary Road to Lake Mary.

So essentially none of the original LRN 112 is part of CA 203, the original alignment can be seen on the 1935 California Division of Highways Mono County Road Map.

Between 1967 and 1969 CA 203 was shifted onto the modern alignment which ends near the Madera County line close to the Mammoth Ski Area.  This alignment shift took CA 203 from Old Mammoth and through the modern downtown Mammoth Lakes.  It appears that this change was actually done in 1967 according to CAhighways and it appears CA 203 wasn't signed before the shift.  The changes can be seen on the 1967 and 1969 State Highway Maps.

Mammoth Lakes was a very much different place than the tourism crowd might see on a trip to the ski resort.  The area known as "Old Mammoth" was the original site of "Mammoth City" which was built for the Mineral Hill Mine which opened in 1878.  Apparently the mine at Mineral Hill was large enough that two smaller mining camps known as Mill City and Pine City also were located near it.  Mammoth City almost died out with far less than 100 people by the early 1900s before rebounding to a population sizable enough to warrant post office service by 1923.  I'm to understand that a gold boom in 1905 near the Devils Postpile likely played a large role in reviving Mammoth.

The Devil's Postpile was originally in the boundary of Yosemite National Park but some of the lands were made public during the gold boom.  The Devil's Postpile was absorbed into Devils Postpile National Monument in 1911 and really has been the subject of infrastructure related conjecture of all kinds ranging from a reservoir to a Trans-Sierra highway.  The Park Service actually has an interesting article on the subject that would lend suggestion that CA 203 might have be in part realigned from Lake Mary to the modern alignment as part of a longer reaching plan to cross the Sierras via the San Joaquin River.

As for Minaret Summit and Devil's Postpile I did visit both in 2016.  Minaret Summit is a view point located at 9,265 feet overlooking the Minarets which is a series of jagged peaks in the Ritter sub-range of the Sierras.  Driving west past the Mammoth Ski Resort to Minaret Summit alone is worth the effort just for the views. 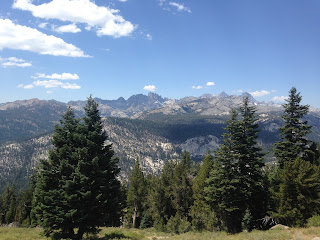 Devil's Postpile takes considerable more effort to reach.  In the summer access to Minaret Summit Road is generally restricted west of Minaret Summit and requires use of a shuttle from the Mammoth Ski Area.  The Mammoth Ski Area tends to be packed in the summer time which means you'll likely be parking downhill quite a ways to reach the shuttle.  In late summer the crowds tend to die down and vehicular access to Devil's Postpile via Minaret Summit Road is much more open.  The Devil's Postpile is located on the Middle Fork San Joaquin River and is a series of column shaped lava basalt formations that have a form resembling logs. 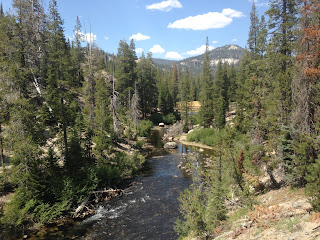 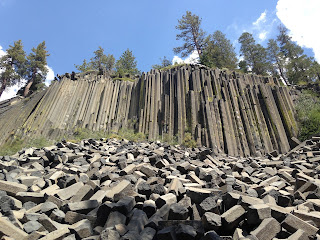 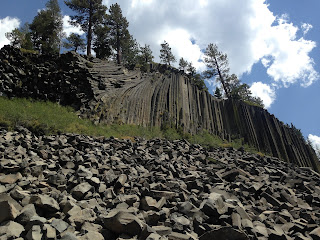