By Adam December 27, 2016
Floyd is one of the smallest county seats in Virginia.  At a population of just over 400 - Floyd is the county seat of the same county that shares its name.  However despite its small size, Floyd has a colorful history and its downtown is the center of Bluegrass Country.

Floyd County was formed in 1831 and named after Virginia Governor John Floyd who was raised nearby.  The county seat of Floyd was established three years later and was originally named Jacksonville after President Andrew Jackson.  The town was incorporated in 1858 and would have its named changed to Floyd in 1896. The town's population has ebbed and flowed around 400 residents since then.
Floyd is in the heart of Bluegrass County and Virginia's Crooked Road Heritage Trail winds through town on US 221 and VA 8.  The Floyd Country Store is not only a classic small town general store; it is home to the Friday Night Jamboree - a celebration of Bluegrass and Americana music - every Friday Night at 6:30.  Local residents and tourists from throughout the world have taken part in this great tradition. 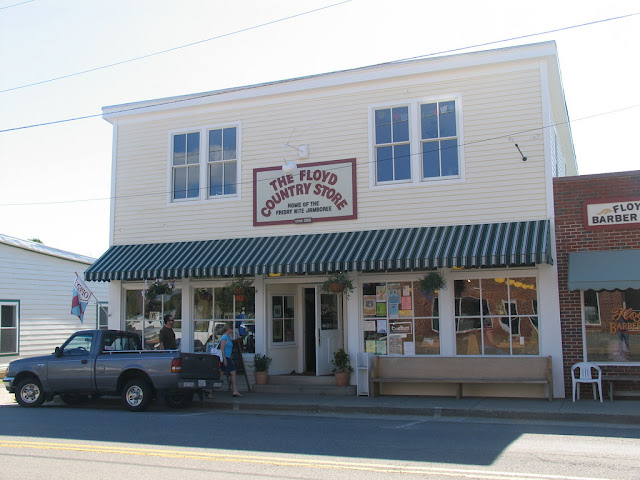 Floyd is home to numerous festivals and events including the annual FloydFest which is a four day music and arts festival that is located just off of the Blue Ridge Parkway. Floyd may be very small but there's a lot to do, see and enjoy in this tiny but welcoming community.