By Adam August 15, 2016
One of South Carolina's most popular and also yet unknown beaches is Hunting Island State Park.  Known for the numerous species of wildlife and plant life, Hunting Island is one of the highlights of the South Carolina Low Country.   It is quite the opposite of the built up areas of Myrtle Beach's "Grand Strand" to the north and more rural to the golf paradise known as Hilton Head Island to the south.

The park is well known for its natural beaches, lagoon, wildlife, lighthouse and camping.  Through out the park there are numerous hiking and nature trails.  The marshwalk on the west side of the park is a great place to capture sunsets and wildlife.  Overall, the park consists of over 5,000 acres of beach, forest, and marsh. (1)

Another highlight of the park is the lighthouse.  The Hunting Island Lighthouse is South Carolina's only lighthouse accessible to the public. (2)  The originally structure was built in 1859.  The second and existing structure was built in 1875 and moved due to beach erosion to its present location in 1889.  The lighthouse was decommissioned on June 16, 1933. (1)  Besides the lighthouse and wildlife, the beach maybe the park's number one attraction.  Since the 1930s when the park was built by the Civilian Conservation Corps, the state has done its best to keep the beach in its natural state and preserve it from further erosion.

Some of the little known facts about Hunting Island are: scenes from Forest Gump and G.I Jane were shot on the lagoon side of the island.   The Vietnam War scenes in Forest Gump were shot here. (2)  There are is also a campground and a number of rental cabins available at the park. 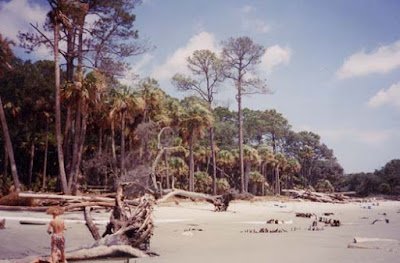 To get to Hunting Island is very simple, from either direction on Interstate 95 to exit 33 and follow US Highway 21 to its end at the entrance of the park.

All photos taken by author - August 2001