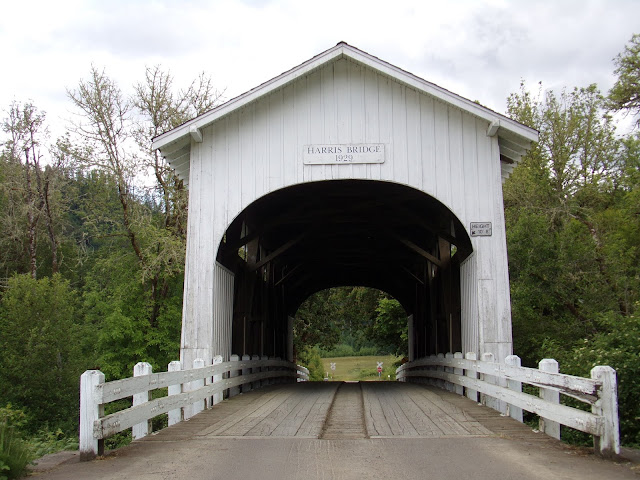 The Harris Covered Bridge located on Harris Road near Wren, Oregon was built by H.W. Fiedler to replace a covered bridge at the same site. The bridge was constructed in a Howe through truss design and is 137 feet in length as it spans across the Marys River. Although records in Benton County, Oregon records show 1936 as the construction date of the bridge, locals claim the span was built in 1929 and have posted the year on a sign on the bridge.

The Harris Covered Bridge retains a rounded portal design and other features, including narrow windows below the roof line to light the bridge's interior and longitudinal deck planks. The bridge's siding has been constructed with a board and batten style, along with a shingled roof. The covered bridge remains open for both light vehicular and pedestrian traffic.

Harris has been a community since 1890, bearing the name of a pioneer landowner by the name of George Harris. Before the community came along, there was a house and sawmill built by a gentleman by the name of Charles King. When the post office in town was established in 1918, residents petitioned for the name of Harris, but postal authorities feared confusion might develop with nearby Harrisburg. For a time, the town was known as Elam, named for Mrs. Gladys Elam, but the name of the community was later changed to Harris. The post office lasted until December 31, 1928 when it was closed and services moved to Wren.

Not much is left from the heyday of Harris, Oregon, just a few homes and a winery. The former town site of Harris is marked by the Harris Bridge Winery and the Harris Covered Bridge. The Harris Bridge Winery is located within view of the covered bridge, offering wine tasting, picnicking, a couple of annual music festivals and stories that have been penned by their resident writer.

To get to the Harris Covered Bridge, you can take US 20 west about four miles from Philomath to the intersection with OR 223 in Wren. Take the right onto OR 223 to Wren (Kings Valley Highway), then immediately take the next right to Wren Road. Take the next right, which is just before the train tracks on to Harris Road. From there, take Harris Road for about two and a half miles west of the community of Wren and you will encounter the Harris Covered Bridge. Happy traveling!