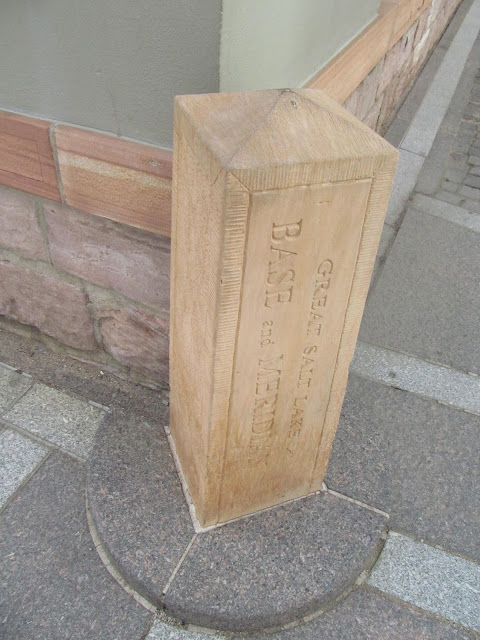 Take a walk around downtown Salt Lake City, Utah and you will be immersed in history. There is abundant history of the early days of the settlement by the Mormons of the Church of Jesus Christ of Latter-Day Saints and other pioneers from the era of westward expansion that can be found in the corridors of the city center. Temple Square, which is sacred ground in the Mormon faith, was built in what is today part of downtown Salt Lake City. Right around the corner from the heart of Temple Square is the Great Salt Lake Base and Meridian, the exact point from where Salt Lake City's street grid system originates from.

If you look at a map of the streets of Salt Lake City, you'll see street names like S 300 E or 2700 South. Those street names are based on the Base and Meridian emanating from downtown Salt Lake City. This may look odd to an outsider if they are looking at an address like "749 E 500 S", until one realizes is should be read in two distinct parts, 749 East and 500 South. This means, starting from the marker on Temple Square, one should travel seven and a half blocks east and then five blocks south. This address just happens to be for the Gilgal Sculpute Garden. The street numbering system makes any location easier to find once you understand how it operates.

The Great Salt Lake Base and Meridian is a small statuette on the southeast corner of Temple Square. On August 3, 1847, this location was fixed as the point from which all city streets were named and numbered. Salt Lake City’s grid system originates from here like a math coordinate. Acccording to this system, the coordinates 0 East, 0 West, 0 North, and 0 South start from the Base and Meridian marker. This location was chosen during the original survey of the Great Salt Lake in which Brigham Young designated a centralized temple site on July 28, 1847. The grid system based on the east-west base and north-south meridian which is still used today in almost every city and town across Utah. Many of Salt Lake City's streets have no set names, but rather obtain their labeling by their distance from this marker in each direction beginning with zero, and progressing by roughly 100 with each passing city block.

Four days after Brigham Young arrived in the Salt Lake Valley, he touched his cane to the ground and said, 'Here we will build the temple of our God." Young then tasked Orson Pratt and Henry G. Sherwood with surveying the surrounding land and laying out the city, choosing a location near this spot to be the base and meridian location. This spot is at the corner of what is now South Temple Street and Main Street, or the southeast corner of Temple Square, this making the temple the physical and spiritual center of Salt Lake City and the Mormon faith. It should be noted that Orson Pratt made his observations based on solar time, and thus determined the meridian to be longitude 111 degrees, 26 minutes, 34 seconds west of Greenwich. A later survey using more exact methods showed that Pratt's measurements were off by about 27 minutes in error. As a result, a second marker was placed on the correct spot, which is just north of the South Visitors Center at Temple Square.

David H. Burr, first U.S. Surveyor-General for Utah, located here in August 1855, the initial point of public land surveys in Utah, and set the original pink sandstone monument, still preserved in position at the center point of the base and meridian. Benjamin Thomas Mitchell received a payment of $25 to carve the marker out of local sandstone. Mitchell, one of the designers and masons for the Salt Lake Temple, first worked on the Nauvoo Temple in Illinois which qualified him for the new task. His marker stood for many years, but the sandstone eventually wore down and eroded until it needed to be replaced, even after receiving a surrounding fence in 1932 An astronomical station with its stone base still standing 100 feet north and 50 feet west of this corner was established by George W. Dean, of the United States Coast Survey (now the National Geodotic Survey) on September 30, 1869, to determine the true latitude and longitude and it was used to obtain correct time at this point until December 30, 1897 when standard time zones started being used.

It's probably also worth noting that the stone marker is in remarkable condition. That is because the original marker did not fare well over the years of freeze and thaw cycles. The marker was moved indoors to preserve it as the original marker had deteriorated significantly. In order to preserve the base and meridian stone, the Church History Museum replaced it with a replica carved from the same local sandstone in August 1989.

Today, you can visit the stone marker and historical plaque that explains the Great Salt Lake Base and Meridian. I happened to come across it quite randomly during a visit I had in Salt Lake City. I was walking around Temple Square and taking pictures when I stumbled upon the stone marker. Knowing the story behind the Base and Meridian marker really does explain how to get around Utah while driving, so I was glad that I could learn more. 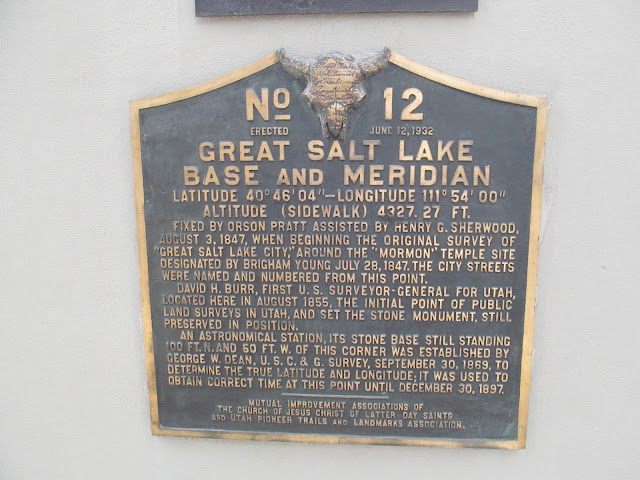