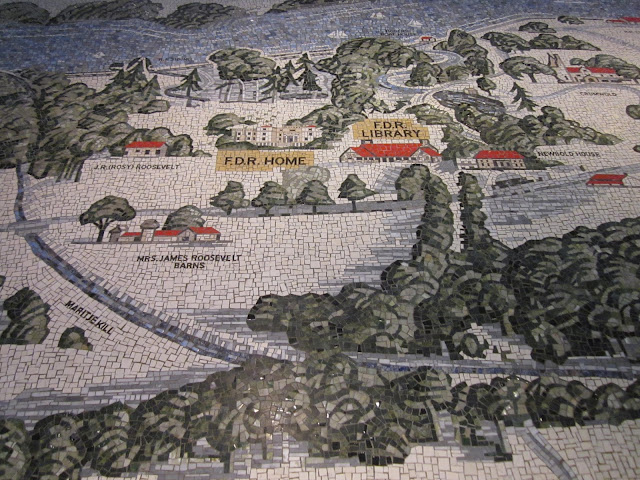 President Franklin Delano Roosevelt had a decades long history with the development of parkways. You can even say that he was a bit of an armchair highway engineer. In 1925, he was named the first commissioner of the Taconic State Park Commission (TSPC) in New York State and was instrumental in the early construction of what is today the Taconic State Parkway, even as he clashed with the legendary Robert Moses. Roosevelt wanted the parkway to provide splendid views for motorists traveling up and down the Hudson Valley. As President, Roosevelt supported efforts for parkways to be built, whether they were constructed, such as the Blue Ridge Parkway in North Carolina and Virginia, or ultimately canceled, such as the proposed Green Mountain Parkway in Vermont. But I was still surprised to find out that FDR himself had proposed the construction from the Taconic State Parkway to the Franklin D. Roosevelt Library and Museum that was being built near the Franklin D. Roosevelt home in Hyde Park, New York. While researching various proposals on the Taconic State Parkway, I stumbled upon a number of documents from NPSHistory.com regarding a road that President Roosevelt had proposed between the parkway and Hyde Park.

Our story begins in December 1939 when President Roosevelt read an article in "The Star", which I can assume to be the Poughkeepsie Evening Star and Enterprise, a newspaper in circulation at the time. In the article, Paul T. Winslow, the Executive Secretary of the Taconic State Park Commission at the time, was quoted as saying that there was a need to construct suitable east-west roads in Dutchess County to connect with the north-south Taconic State Parkway that was being built at the time. Roosevelt saw that it was a good time to write a letter to Winslow so he could suggest that a road be built to the library and museum being constructed at the time. Roosevelt suggested several possible routes for a highway that would lead from Washington Hollow or just south of there (approximately where the Taconic State Parkway meets with US 44 today) to either East Park and Hyde Park or to a connection with the Albany Post Road (also known as US 9) just south of the proposed library. Additionally, Roosevelt suggested that a road of this kind should follow existing roads as much as possible, but noted that there is virtually no existing road that runs east-west from Washington Hollow to the Hyde Park line, unless you go north as far as Salt Point. This lack of direct connectivity between Hyde Park and the Washington Hollow area still exists today, as you would have to take a mish-mosh of local, county and state roads between the two areas. However, once you reach the Hyde Park line, Roosevelt mentioned that the existing road to East Park and Hyde Park village is available for parkway use, and at a point from one to two miles south existing roads could be used for half the distance. With Roosevelt's correspondence to Winslow, he enclosed a map with a rough design of where the proposed road could be built.
By September 1940, the parkway proposal picked up some steam, but still lacked a proposed name. Correspondence from the National Park Service presented a proposal with a parkway of approximately 9 miles in length connecting US 9 opposite the Franklin D. Roosevelt Library with Section #6 of the Eastern State Parkway (now known as the Taconic State Parkway) at a hilltop northeast of Pleasant Valley. The parkway was to be built to similar standards as the Taconic State Parkway with a 400 foot right of way, and estimated construction costs of about $1,000,000 in 1940 dollars. The estimate was based on an average mile cost of state parkway construction of $100,000 to $125,000 per mile and that the land values for the purchase of the right of way would vary between $50 to $200 per acre. The westernmost 4 miles of the parkway would cross lands in Hyde Park owned by President Franklin D. Roosevelt and it was suggested that it could be arranged to have the necessary right of way for this part of the parkway to be free of cost for the project. One of Roosevelt's requirements was that any stretch of the parkway that were located on his properties should be located so as to avoid a hilltop site in which he has selected to develop for his own use at some future time. It should be noted that Roosevelt had an extensive amount of property in Hyde Park and he had listed his occupation as a tree farmer on his tax forms, so he had interest in maintaining the local scenery in a natural, yet spectacular state. The topography on which the parkway could have been constructed is such that the main ridges of the hills in the area run generally north and south. This meant that a parkway (or any road) running east and west would have to be carefully located if unnecessary scars on the countryside were to be avoided. That condition applied more particularly to the eastern portion of the proposed parkway where the hills are quite pronounced and definite in their formations. The National Park Service also considered that the proposed parkway to Hyde Park would also serve visitors to the Vanderbilt Mansion National Historic Site, which is also located in Hyde Park, but cautioned at the time that any studies to construct a national parkway would be preliminary at this time.

The parkway proposal was put on the back burner during World War II, but was revisited during the fall of 1945. President Franklin D. Roosevelt passed away earlier in the year and the proposed parkway was given the name of Franklin D. Roosevelt Parkway. The Taconic State Park Commission felt there was more justification to build the parkway in the postwar era, with a new estimated total cost of $2,500,000. Correspondence sent by Paul Winslow of the TSPC to Newton Drury of the National Park Service and Secretary of the Interior Harold Ickes suggested a mix of federal and state funds for construction and maintenance to be undertaken pursuant to the provisions of the Federal Aid Highway Act of 1944; with federal funds to be used for construction, while New York State would fund land acquisition and future maintenance. The response from the National Park Service in layman's terms was that it could not be a national parkway, but they were willing to consider the parkway as a state highway project. Under the Federal Aid Highway Act of 1944, the it authorizes parkways connecting only with national parks and national monuments, that the right of way of parkways would need to be deeded to the federal government and that the future maintenance of the parkway to be accomplished under appropriations made to the National Park Service. The federal suggestion was if New York State would initiate a project to have this spur parkway placed on the State 7% Federal-Aid system, the federal government then could participate in the acquisition of the right of way for up to 30% of the cost and in the cost of construction up to 50% of the cost. At the time, New York State had 790 miles of undesignated 7% highways and that the proposed Franklin D. Roosevelt Parkway project would be eligible as a Federal-Aid project as it would connect to US 9, a Federal-Aid Highway in its own right. It was also suggested that the start of the spur road might be planned where the proposed Taconic State Parkway intersected with US 44, about a mile south of the line suggested by the Franklin D. Roosevelt. From a federal public roads point of view, there would have been no objection to the New York State Highway Commission and the Taconic State Park Commission entering into an agreement where New York State would agree to maintain the parkway spur as a part of the state parkway system. The response from TSPC on November 28, 1945 was if any provisions or revisions were needed so a request in the 1946-1947 budget could be made for land acquisition. But the response on December 3, 1945 from James F. Evans, the director of the New York State Division of Parks was in response to Interior Secretary Ickes. That response stated that the construction of the Franklin D. Roosevelt Parkway would not work as a Federal Aid Highway because there was not enough Federal Aid money available for New York at that time and that the only way to handle this matter was through a special act. It seems like that was the end of the Franklin D. Roosevelt Parkway proposal, as I didn't uncover anything beyond the end of 1945.

In my opinion, the Franklin D. Roosevelt Parkway would have made a great parkway in Dutchess County, New York. It certainly would have served a need for east-west traffic between Hyde Park and points east in the county, whether or not FDR had anything to do with it. The issues with connecting between Point A and Point B in Dutchess County were similar in Roosevelt's day as they are today. But the parkway may have forever altered the character of Hyde Park and the surrounding area, which is now mostly made of exurban homesteads, woods and farmland. Still, as a history buff, especially of Presidential history and transportation history, it was interesting to find out that Roosevelt tried to assist in solving a local transportation issue even while serving as President. SHAMGAR said…
As an old Friend and ART Dealer from WASH. DC used to Quip Whenever He came UP Here each Summer to Escape the City and Rusticate in N.W. CONN. > "The TACONIC is the TONIC ! "
11:47 PM