Pennsylvania wants to move US 119 onto Mon-Fayette Expressway

Under the Pennsylvania proposal, US 119 would no longer leave the freeway at Morgantown Road (un-numbered exit; mile 12), but it would now continue on the toll road south into West Virginia and then west on Interstate 68 until Exit 1.

However, West Virginia prefers that US 119 leave I-68 at Exit 7 and continue to run through downtown Morgantown. 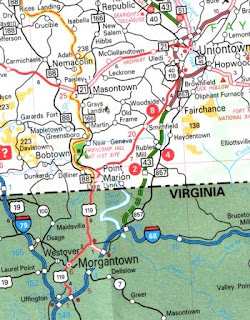 Above: A scan from a 2009 PennDot State Map showing the under construction Mon-Fayette Expwy (in Green) US 119 and Interstate 68.  Both the PA/WV plan would move US 119 to the east along the Mon-Fayette Expressway all the way to Interstate 68.  Pennsylvania's plan has US 119 leaving I-68 and heading south at Exit 1.  West Virginia's has US 119 leaving I-68 at Exit 7 and along its present alignment through Morgantown.

Of course all of this is up to AASHTO's approval, and US highways have generally not been allowed to be signed on toll roads.

Thanks to Brian Powell for some additional details.

Anonymous said…
This is a good idea. Route 119 is very windy and dangerous between Smithfield and Morgantown. This new designation would further encourage traffic to bypass this segment.

As for the specific routing, I like the PA proposal better. WV should go with that proposal, but they should try to sign the downtown Morgantown stretch as Business 119. That would likely help cut the congestion.
10:42 PM

Anonymous said…
Wonder if the Uniontown bypass will be signed as Route 43? I'm talking about the section between the Route 51 interchange where the new ramps are tying in and the Chadville interchange.
10:59 PM