By Bob Malme February 21, 2010
Adam Prince and I took a Sunday morning tour to check out construction of the Triangle Expressway, NC's first Toll Road. I had not been down to check progress since I first toured the area last fall. The TriEx (as the Turnpike Authority is trying to get potential users to call it) is made up of 2 parts: The Triangle Parkway (an extension of NC 147) and the Western Wake Freeway, an extension of NC 540 from NC 55 north of Apex to the NC 55 Bypass in Holly Springs.
Here's a map to help explain the two parts and to identify the locations where we went on this trip (map excerpt taken from NCTA 2009 Annual Report, p. 17):

We expected to see more progress on the Triangle Parkway than the Western Wake Freeway, but it turns out it was the exact opposite. The contractors (who are working under the name The Raleigh Durham Roadbuilders, very original) started tree cutting and landscaping at the northern end of the Triangle Parkway, starting where it will depart from the existing NC 147: 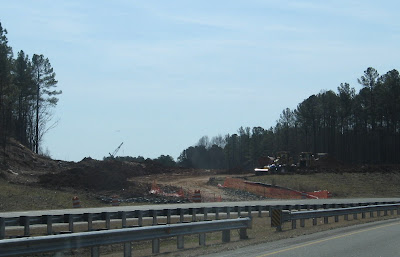 Above is a photo from the southbound lanes while below is a view going northbound: 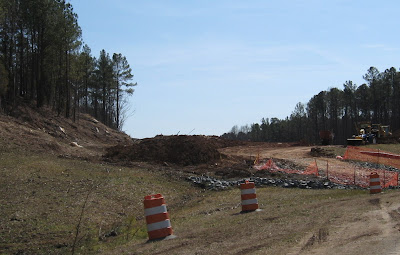 The tree cutting and landscaping continues, but only as far as just south of the US EPA complex. Here's a view north from the end of the cutting back toward Hopson Road, which will have the one of the two interchanges on the parkway (the other being for Davis Drive, number 3 in the map above: 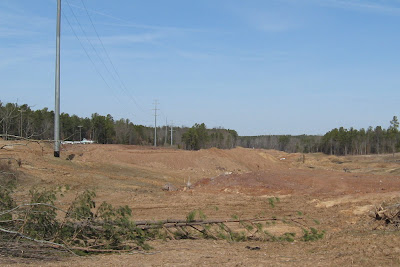 Here's a view from the overlook on the other side of the road: 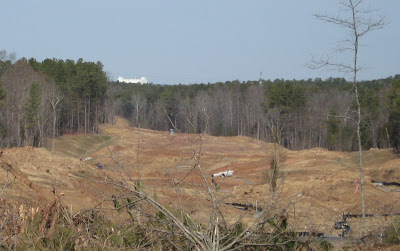 The ground overlooking the above view will be used as part of building a bridge for the road/ parkway intersection. The dimensions of the bridge were marked by stakes like below: 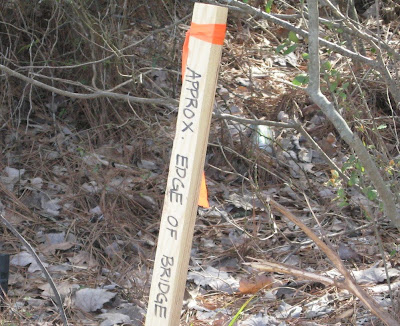 This was on the west side of the Parkway right-of-way, a similar stake was marked on the east side. Here was some of the equipment doing preliminary work on the bridge: 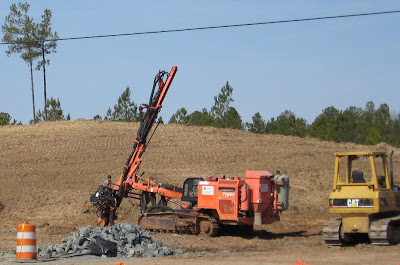 There was no work going on here, in contrast to where we went next, the current end of NC 540 at Exit 66: 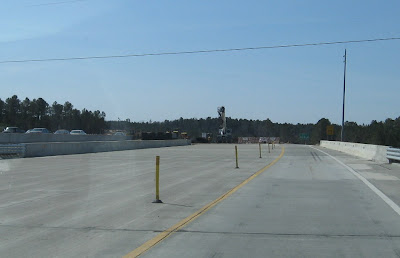 Notice the cars parked on the left for contractors doing work even on Sunday.
Now an indulgence: 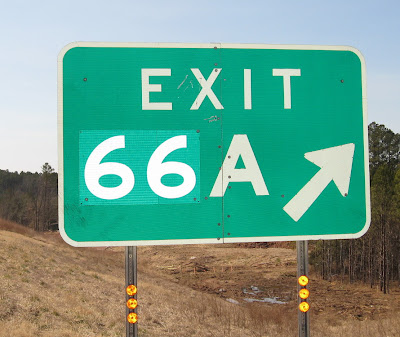 A closeup of the Exit 66A gore sign. Since I'm partially responsible for the taped over number, and the map shows different interchange numbers, I thought I'd take a photo before 'my exit numbers' were possibly removed.
Now back to the overview of construction progress: 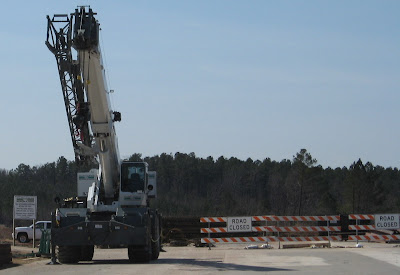 The crane truck seen two photos above. Where this equipment and road closed signs are, is where the groundbreaking took place last fall, not even the potted plants remain. Here's a view beyond the barriers: 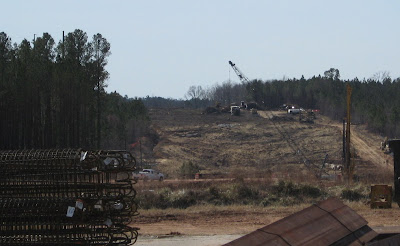 Just in case you wanted to see an official sign as who is constructing the parkway: 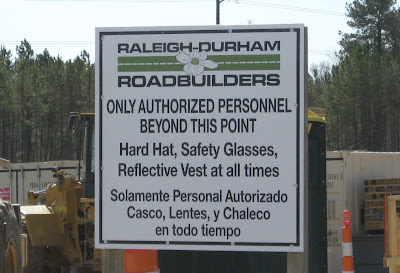 You can tell their tree cutting is very environmental from the color of the highway and the flower in the middle of the logo (plus you can work on your Spanish).

We thought that there would not be much tree cutting and landscaping work for this part of the Expressway as for the Parkway. Turns out there was more. The clearing proceeds further south, over McCrimmon Parkway, just to the west of Panther Creek High School, and all the way to Carpenter Fire Station Road in Cary (that's just about where the purple NC 540 shield is in the map above, if you're not familiar with the area). We plan to go out again in late March to get the next update on construction. The NCTA still says the Triangle Parkway will be open in 2011.

Anonymous said…
Thank you for updating us, esp since the news and county don't seem to care to. Really wished they were further along.
10:36 PM

Anonymous said…
Let's get some of the stimulus $$$ to build it quicker. We can surely use the 64 to US1 section as soon as possible. Every day I go against the traffic it will be great to see the fuel economy savings as folks avoid the traffic.
5:54 PM

Anonymous said…
Well this week April 5-9 they have cleared Kitt Creek/540 to Davis, I imagine Davis to hopason next week for the Triangle parkway.
They are moving fast. Once those crews go in, they clear many acres a day.
10:12 AM