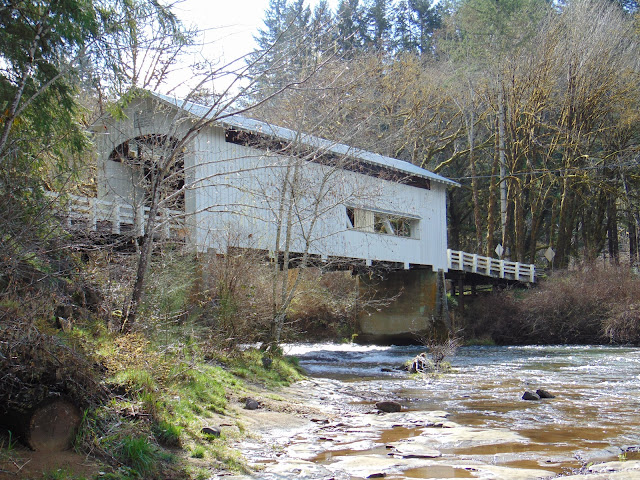 Built in 1925, the Wildcat Creek Covered Bridge crosses the Wildcat Creek just as it meets the larger Siuslaw River in Lane County, Oregon. The bridge is also known as the Austa Bridge, after the nearby community of Austa located near OR 126 between Mapleton and Walton. The bridge was located along the old Stagecoach Road, which was the original route from Eugene to Florence on the Oregon Coast. Stagecoach Road hugs the hills along the Siuslaw River until it drops down to the narrow plain at the town of Swisshome. During the 1930s, both the road and the covered bridge were bypassed by the Linslaw Tunnel and the Mapleton Bridge when modern OR 126 was built. As a result, the Wildcat Creek Covered Bridge has a quiet existence just off of OR 126, making it ripe for passive exploration.

The Wildcat Creek Covered Bridge is 161 feet long, including approaches, with a main span of 75 feet. The bridge features a Howe single truss design, as the bridge does not have the wooden diagonal counters that you would find on a traditional Howe Truss covered bridge. The covered bridge features a window, but only facing the confluence of the Wildcat Creek and the Siuslaw River. This does allow for some nice views from both the bridge and also the shores of the river, as there is a nearby boat ramp providing Siuslaw River access.

I made a quick stopover to the Wildcat Creek Bridge as I was making my way down OR 126 west of Eugene. The access road to the covered bridge comes quickly from the main road as I had found. But once I had arrived at the bridge, I found it was easy to find parking and walk around. Overall, I found this was a nice stop to break up the driving along OR 126 between Eugene and the Oregon Coast.