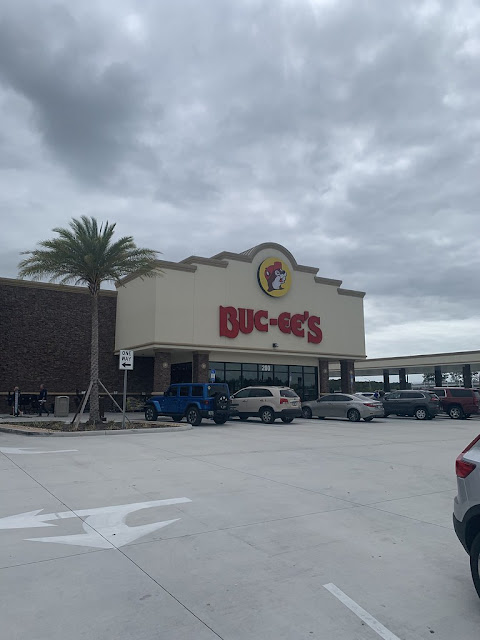 Buc-ee's, the Texas-sized gas station and convenience store that started in Texas, has been expanding its territory.  New locations have sprung up in Georgia, Alabama, and Florida.  Construction is underway, or plans are in place for even larger stations in Tennessee, Kentucky, South Carolina, Mississippi, and Colorado.

For nearly four decades, Buc-ee's was a Texas-only novelty.  The first location opened in Lake Jackson, Texas in 1982, and another four stores opened over the next decade.  In 2000, Buc-ee's began its Texas-sized growth by adding over 20 new stores - mainly around Houston, Dallas/Ft. Worth, and Austin/San Antonio areas.

Each store was built larger - with more gas pumps, amenities, and offerings.  The store became well-known for its clean bathrooms, fresh-cut brisket sandwiches, and wall of beef jerky.  Texans and visitors from all around would take road trips to visit new stores or get their Buc-ee's fix.   Buc-ee's has billboards advertising their stores, in some cases well over 500 miles away.  People will go out of their way to stop and shop at a Buc-ee's.

Since 2019, Buc-ee's has begun to expand outside of Texas.  The first non-Texas location opened in Robertsdale, AL.  The St. Augustine, Florida store - which I visited - opened in 2021.  I had become skeptical of the over 100 pump gas station and over 50,000 square foot convenience store.  It seemed like overkill to me.  However, I wanted to stop and check it out on my own.

The first thing you notice are the islands of gas pumps surrounding the convenience store.  The St. Augustine Buc-ee's has over 100 gas pumps and a 55,000-square-foot store.  The grinning bucked tooth beaver is found all over the place.  With all the pumps, getting gas here is easy - however, there can be a lot of traffic getting into Buc-ee's.  18-wheelers are not allowed at Buc-ee's, which is nice compared to similar-sized stops like a Love's or Travel America (TA).  Yet, I couldn't find any gas price board outside the station.  Interestingly, the pump number I had was 208 making me think that there are well over 200 pumps at the station.

Inside, the store is split into a gift shop/retail store and a food/convenience side.  The centerpiece is the various food serving stations (the hand-carved brisket sandwich station, for example) and beverage fountain wall.

The retail store side is honestly a cross between a Cracker Barrel, a beach novelty store, and the sporting goods/home furnishing section at your local Wal-Mart.  There are full-fledged shopping carts - and they were in use.  The Buc-ee's logo is on nearly everything from T-Shirts, towels, mugs, cups, and yes even swimwear.  That's a bit of overkill if you ask me.

The food side was nothing outside of what you would find at any other convenience store.  Though the aisles were wider, things were tidier, and yeah, you had a wall of beef jerky.  But it's no different than a newer Wawa, Sheetz, even Circle K or 7-11 - it's just a lot bigger.  It's a truck stop minus the trucks.

The food stations are nice yet in some ways more of a show.  It's no different than a Sheetz M-T-O (made to order) the difference being people carving brisket in front of you.  I didn't use the restrooms while there; however, my wife did and said they were nothing overly spectacular.

I wasn't wowed by Buc-ee's at all.  The retail and gift shop was way overkill and unnecessary.  I just don't want a Buc'ees branded swimsuit, bookbag, or pop-up tent.  The food and convenience store items were nothing out of the ordinary.  Will we stop again? Possibly.  However, it will not be a destination - if we need gas, and it is there, sure.  But, there are plenty of other gas stations along the miles of Interstate and other highways in the Southeast (and elsewhere) that we can do the same thing (gas up, use a bathroom, get snacks and drinks) without a grinning beaver everywhere we turn.

Yet, it works. Obviously, the novelty of the brand has a long reach.  Here in the Charlotte, North Carolina area, I have seen a few people with Buc-ee logoed shirts and apparel.  Yet, you must wonder how long that may last as they continue to expand.  Perhaps being "Bigger than Texas" is not always a good thing.

Anonymous said…
You probably don’t like Disney either.
9:17 AM

Challenger Tom said…
Perhaps not, but we do enjoy the weird purple guide signage at Disney World: