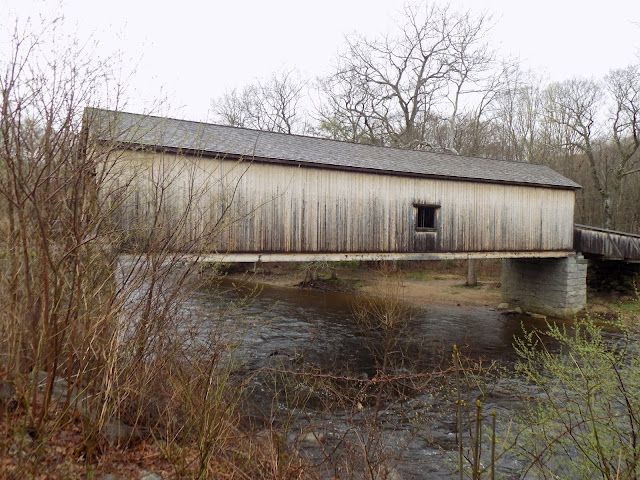 One of three historic covered bridges remaining within the State of Connecticut, the Comstock Covered Bridge spans over the Salmon River between the towns of Colchester and East Hampton (formerly Chatham). Initially built in 1873, the covered bridge is 80 feet long and is built in a Howe truss design. The bridge was named after an early local postmaster by the name of Franklin G. Comstock. The bridge crossing at this point had served as part of the main road between Colchester and Middletown for much of its existence. Numerous renovations and a listing on the National Register of Historic Places ensured its preservation. While it is now one of the three remaining covered bridges in Connecticut, it was originally covered simply to protect the wooden trusses from weather. It is now celebrated for the functional beauty that makes it a New England hallmark. Local residents, visiting fishermen, and sightseers alike can enjoy the beauty of this covered bridge.

In 1785, residents living south of the Salmon River in the town of East Hampton (then known as Chatham) encountered great difficulties in crossing the river to attend church services and conduct business with their fellow citizens north of the waterway. Crossing became such an inconvenience that southern residents even considered joining a different town. Rather than lose valuable tax revenues, Chatham town officials petitioned the General Assembly for money to build a bridge, which was uncovered for its first edition. The first bridge was used for traffic to pass over the river en route to church services, business ventures, and general pedestrian needs, which added access between the north and south ends of town. In 1840 it was upgraded for major traffic to be accommodated and in 1873 the bridge was rebuilt, leading to the Comstock Covered Bridge that we know today. It is the only remaining example of a wooden pony truss in Connecticut. The bad news is, the structure wasn’t engineered to support the weight of the covering.

After decades of service from the bridge, the town spent $4,000 in 1873 to rebuild it into something more closely resembling its current form. The refurbished Comstock Covered Bridge carried traffic between Colchester and Chatham (later East Hampton) for nearly 60 years, until it became unsuitable for supporting the increasingly heavier forms of vehicular traffic that were coming into fashion. As a result, a new concrete bridge which is now part of CT Route 16 was built about 500 feet downstream from the Comstock Covered Bridge. In 1932, the new bridge took over the responsibility from the covered bridge of getting vehicles across the river.

During the 1930s, the Civilian Conservation Corps (CCC) renovated the covered bridge and added wooden gates and new siding. You can see the Despite its reduced role, age and weather continued to threaten the destruction of the bridge. In 1969, with many of its timbers having become rotted due to deterioration, the Comstock Covered Bridge began to sag and was in danger of collapsing under its own weight. Temporary supports were put in place to save the span until major renovations in the early 1970s added steel plates to support the overburdened joints. In 1974, major rehabilitation was conducted which included removal of a 12 inch negative camber, along with strengthening of the bridge. At the time, $482,800 was requested to renovate the bridge, but only $84,800 was received. Nonetheless, the green light was given to fix the bridge.

In the early 1990's, there was a growing concern over vandalism at the bridge along with the need for continued extensive renovations. A group of representatives from a local civic groups called C.A.R.E. (Chatham Alliance of Resources) agreed to have lights installed at the bridge to deter vandalism, make renovations to the bridge and exterior improvements to create a park for all to enjoy. However, the work was not done to restore the bridge to its former glory. Measures were increasingly necessary to keep the bridge from falling into the Salmon River. Massive metal beams were bolted to the sides of the bridge, but that only delayed the inevitable need for a full and proper reconstruction. The 80 foot covered bridge over the Salmon River and north of CT Route 16 was closed in March of 2009 so work could begin on the $1.1 million project to restore the bridge to its former glory and to preserve the historical integrity of the bridge. The bridge was rebuilt using 50% of the original wood. I think that they did an overall swell job in restoring the bridge.

The Comstock Covered Bridge's unique architecture had earned it a listing on the National Register of Historic Places in 1976. Today, this time honored testament to ingenuity and design is part of a public park, thus allowing visitors to take a step back in local transportation history. Its location across the Salmon River brings out plenty of anglers along with other recreational activities for hikers and picnickers alike. In fact, the Salmon River Hiking Trail has a connecting trail that leads to the Comstock Covered Bridge. During a couple of trips to eastern Connecticut in January 2008 and April 2019, I decided to visit the Comstock Covered Bridge and was able to revel in its beauty. 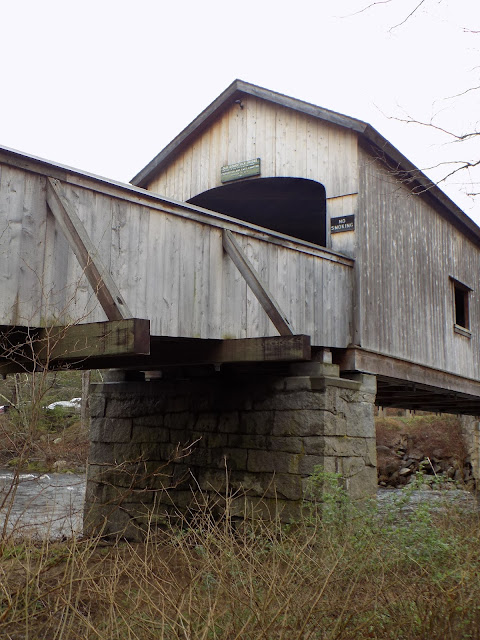 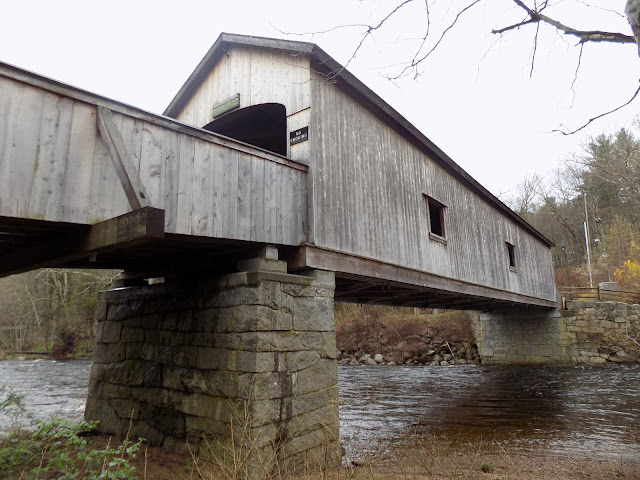 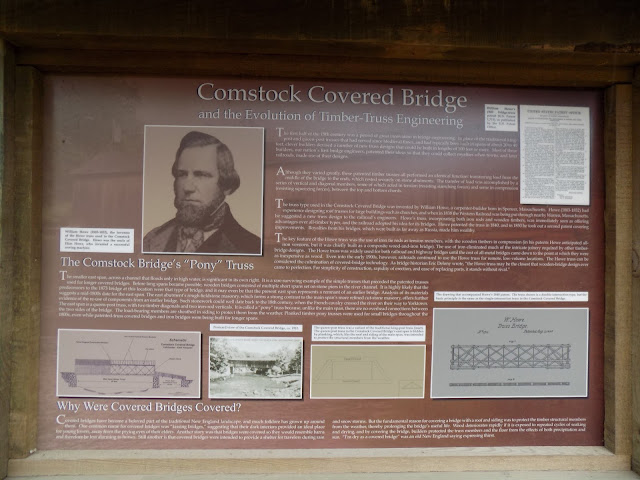 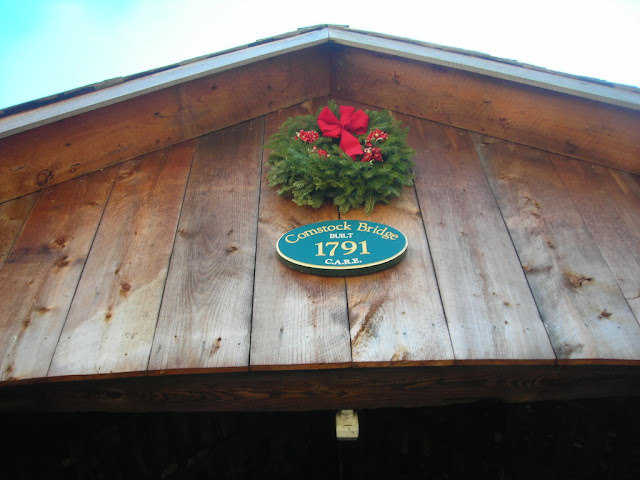 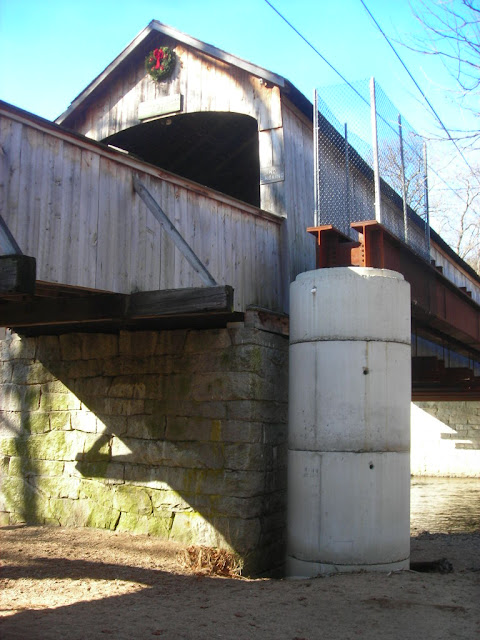 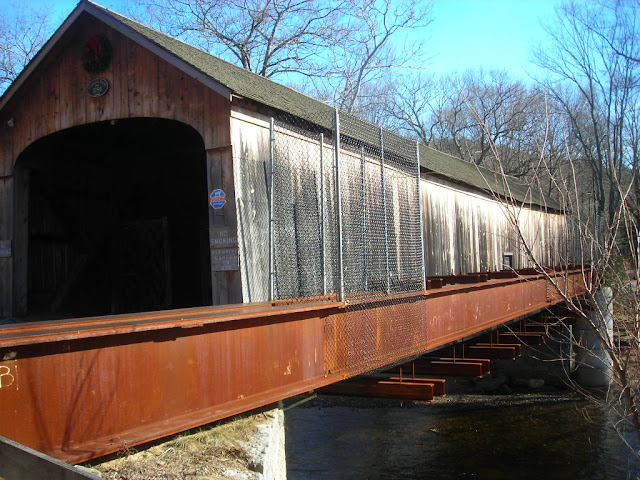