Rocks Village Bridge over the Merrimack River in West Newbury and Haverhill, Massachusetts 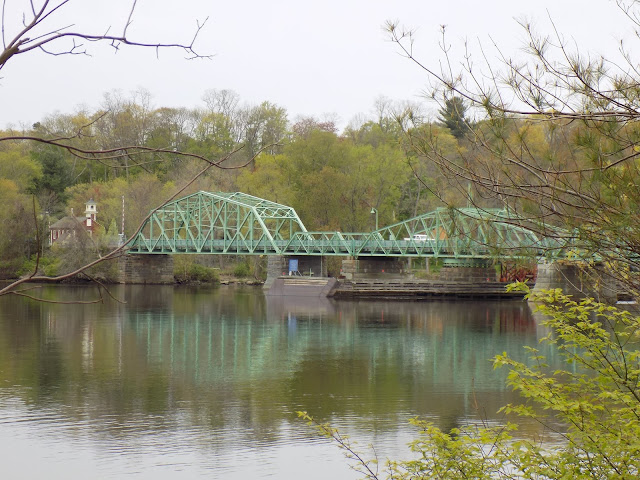 There has been a river crossing of some sort at Rocks Village since 1711, when John Swett Jr., and later, his son John Swett III, was licensed by Haverhill to run a ferry crossing (as well as a tavern) at what was then known as "the Rocks". The ferry crossing remained in their family's hands until John Swett III's grandson James White moved to Vermont around 1790. Soon after that time, it was decided to build a bridge where the ferry once crossed.

The original bridge at Rocks Village over the Merrimack River was named Merrimack Bridge. It was built in 1794 and completed on Nov 26, 1795. It was specified that the bridge should be erected between the public landing place at Swett’s Ferry, to the opposite shore in Newbury, as the town of West Newbury was not set off from the other town until 1820. The original bridge was 900 feet long and 30 feet wide with an arch 140 feet long over the river. The arched part had a crown and there was a draw 30 feet wide, of which the act specified, “Shall be opened without pay or toll at all times.” “Said bridge shall be covered with plank or timber, and sides boarded and railed at least four feet high for the security of passengers.” “Said bridge shall be furnished with at least four good lamps which shall be supplied with oil, and kept burning through the night. The bridge was run by a group of private investors known as the Merrimack Bridge Company, made up mostly by men from Rocks Village. They were responsible for repairs and maintenance and they collected tolls on the bridge. There are many probates from the time that left “one share Merrimack Bridge” to their heirs.

However, the Merrimack Bridge was merely meant to be a predecessor to the current Rocks Village Bridge. In 1818, the old Merrimack Bridge was destroyed by an early spring flood brought on by heavy rains and snow melt from a winter of heavy snowfall. Water in the river was 21 feet above  the normal high water, exacerbated by ice dams of two foot thick ice. The streets and houses were flooded and many cattle had drowned. The Merrimack Bridge held for awhile, and then suddenly with a crash like an explosion it fell into the water and was carried out to the sea with the ice. A ferry replaced the bridge for a good ten years, and then in 1828, a covered bridge was built where the old Merrimack Bridge once stood. Tolls were collected at the bridge until 1868, when tolls for all bridges across the Merrimack River ended, as the bridges became public thoroughfares by order of the courts. 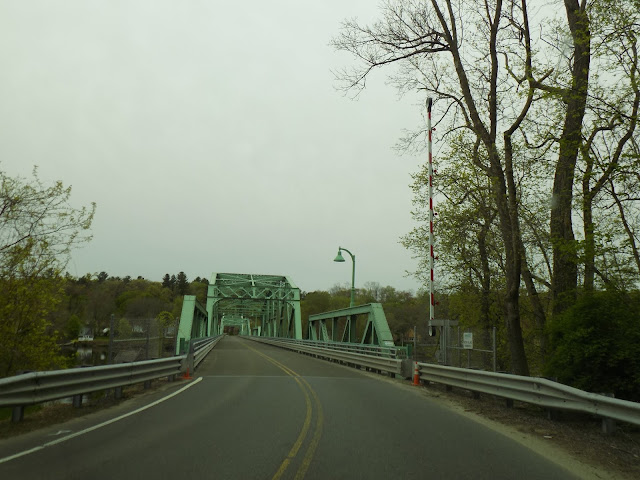 By the time 1873 came around, the covered bridge was found to be in bad condition, especially the draw part of the bridge. An iron span was installed to replace the draw, with Essex County paying for the new draw and the three adjoining towns paying for any repairs. The Haverhill side of the bridge was repaired. Rocks Village residents felt the repairs were inadequate so more repairs were done later the same year.

Now, the Rocks Village Bridge is an historical bridge, but during the 1970s, there were discussions on repairing the bridge, along with capacity issues, increased traffic, and bridge historic preservation took place among local residents. An environmental impact study was made to investigate alternatives to the bridge, along with ending rumors of a connection from I-95 to I-495 to be built over the bridge and village. Ultimately, it was decided to keep the current Rocks Village Bridge intact, but lengthy repairs have been made to the bridge over time. For instance, the bridge was closed to traffic for about 15 months in 2012 and 2013 for rehabilitation, including repair or replacement of the moveable bridge components and replacement of the bridge deck and portions of the steel superstructure at a cost of $14.1 million. 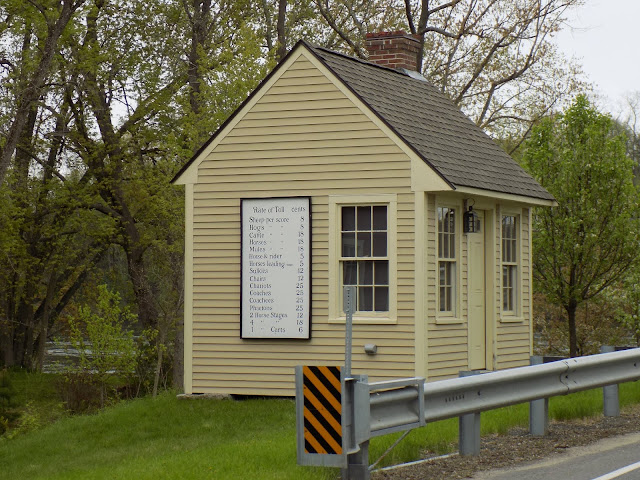 Today, the Rocks Village Bridge serves as an important connection for local traffic for the surrounding communities. But its history and its recreational value is on display as well. On one of my trips across the bridge, I spotted some anglers trying to catch fish on the West Newbury side of the crossing. Upon crossing the bridge from the Rocks Village side of the bridge, you will see an old toll house that shows some of the former toll rates of the bridge. The Toll House was originally built in 1828 and served as a toll keeper's house as well as a cobbler's shop. After 1868 when tolls were no longer taken, the little building fell into disrepair. In 1928 Henry Ford purchased the toll house for his Henry Ford Museum in Dearborn, Michigan. In 2013, students at Whittier Tech, a vocational high school in Haverhill, Massachusetts, built a replica of the toll house which now serves as a small museum for Rocks Village.