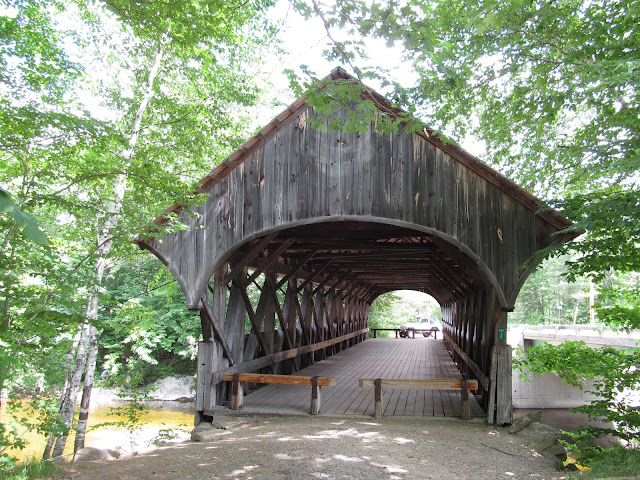 The Sunday River Covered Bridge is not the first bridge to be located at this spot in Newry. The first Sunday River Bridge was built in 1811, but was subject to frequent washouts, including a major one in 1869. When that bridge was rebuilt the following year, a windstorm destroyed the bridge again eight months later. Finding it was necessary to replace the bridge, the town of Newry voted on the construction of a covered bridge and selected Hiram York as its builder. With attention to the bridge's stability, York built the covered bridge using the Paddleford Truss construction that had become common among covered bridges in northern New England. The bridge was restored at the same time it was bypassed by the new bridge just downstream. The truss work of the bridge remains largely original, while the floorboards have been replaced over time.

So you may be wondering why the Sunday River Covered Bridge is also known as the Artist's Bridge. The covered bridge maintains a reputation as being the most photographed and painted of the historic covered bridges found across Maine. It has also been suggested that the name of Artist's Bridge came about because the artist John Enneking was observed working by the bridge on many days, painting in plein air. Enneking was an early American impressionist painter and he maintained a home in Newry. Many of his works featured landscape scenes of northern New England.

Today, the Sunday River Covered Bridge provides a scenic spot to peacefully enjoy the mountains of western Maine. After all, the Sunday River makes its way downstream from the Mahoosuc Range on its way to the Androscoggin River. You may find someone fishing in the river during your visit, or you may opt to detour to the bridge after a day of skiing at the nearby Sunday River ski resort. In all, I rather enjoyed my visit to this bridge.