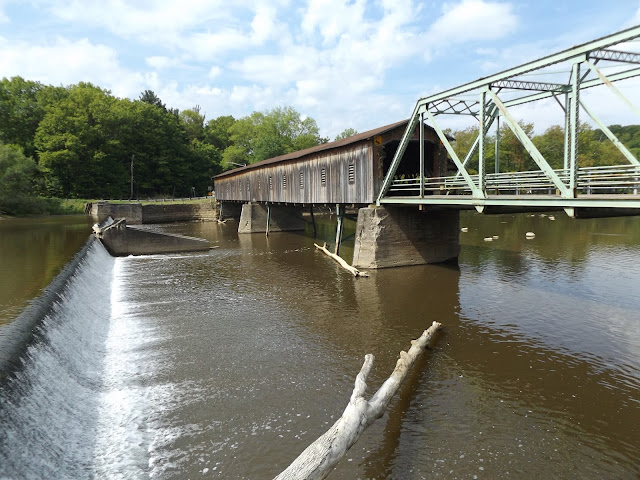 In the Ashtabula County town of Harpersfield, just a few miles south of Interstate 90, is the historic Harpersfield Covered Bridge. This Howe Truss style covered bridge, which is the third longest historic covered bridge in Ohio, was built in 1868 and spans over the scenic Grand River. One of the unique features about this covered bridge is that it is connected to a steel truss bridge, which was built in 1913 as a result of a flood in that washed away the land at the north end of the bridge. The steel span was subsequently attached as a result of that flood. At one time, OH 534 was routed to cross the bridge, but the highway was re-routed around Harpersfield onto a new alignment in 1962. The bridge features a walkway that was added during its renovation in 1991 and 1992. Today, the Harpersfield Covered Bridge is paralleled by nearby OH 534 and there is an adjacent park for visitors to enjoy the bridge and also to spend a quiet morning by going fishing.

To get there, you can take Interstate 90 to Exit 218, then go south on OH 534 for about a mile. Turn right onto OH 307 westbound, then make a left at the first intersection. There will be a sign for the Harpersfield Bridge Metropark and the park was founded in 1961 when the property surrounding the bridge was purchased by Ashtabula County from Western Reserve Properties. Head down the hill and there will be a place to park. The Harpersfield Covered Bridge is part of the Ashtabula County Covered Bridge Festival tour route, which features 19 covered bridges in Ashtabula County.