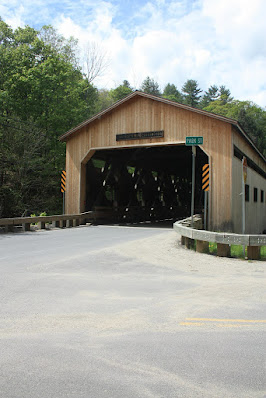 Just off the historic Mohawk Trail along Massachusetts Route 8A in Charlemont is the Bissell Covered Bridge.  A newer covered bridge that was rebuilt in 2007, the long truss bridge is the second covered bridge to cross Mill Brook.  The first covered bridge was built in 1880 and crossed Mill Brook until it was condemned in the 1940s.  Objecting to a modern bridge, the Town of Charlemont fought with the Commonwealth for a replacement covered bridge; and in 1951, a new covered bridge opened.
In 1995, due to deterioration, the bridge was closed to vehicular traffic and a temporary bridge was built next to it.  Yet again, the citizens of Charlemont fought with the Commonwealth on a replacement for the bridge.   The local residents won again; and in 2007, a full rehabilitation project started.  In 2009, the rehabilitated Bissell Covered Bridge reopened to vehicular traffic.  The bridge was added to the National Register of Historic Places in 2004.
Bridge Specs:
All photos taken by post author - February 2005 & May 2012.
Sources & Links:
How To Get There: