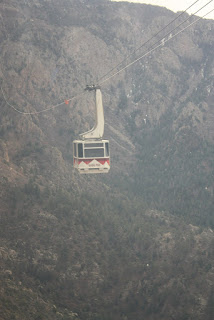 Sandía translated from Spanish to English is watermelon and the red, pink and brown reflections of sunlight at sunset led to its naming.  The mountains sit within the grounds of the Cibola National Forest and National Grasslands.


There are two ways to get to the top of the Sandia Range.  New Mexico Highway 536 climbs the east side of the mountain and leads to Sandia Crest which at 10,678 feet is the highest point in the range. 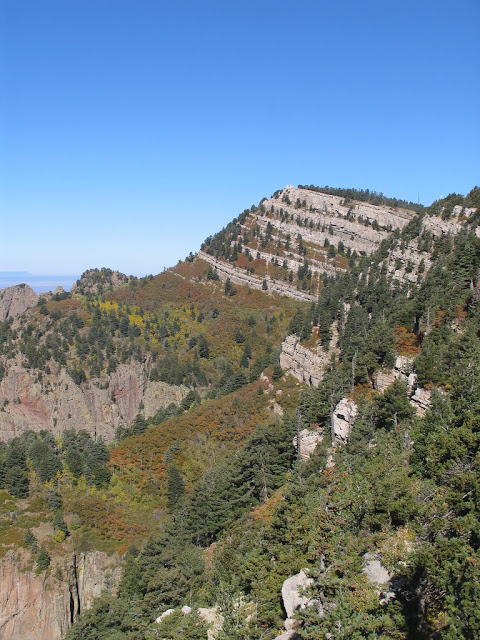 The tram ride offers amazing views of Albuquerque and the rugged surroundings.  At the top, there is a gift shop, restaurant, and access to the many trails.  A little over one mile trail leads to the Kiwanis Cabin and to Sandia Crest.  Built in the 1930s by the Civil Conservation Corps, the cabin was planned by a local Kiwanis group.  It is a popular spot for long or short distance hikers to rest and take in the views.


Also, the 7.5 mile La Luz trail is one of the most popular and most challenging hikes on the mountain.
If you have the time, the Sandia Peak Tramway is definitely worth the stop while you are in Albuquerque.  The tramway typically operates 9 am to 9 pm in the summer and from 9 am to 8 pm in the Winter.  Trams leave approximately ever 15 minutes Round trip tickets are $25 per adult, $20 for students & seniors, $15 for kids 5-12.  Tickets can be purchased in advance on-line or at the tram ticket office. One way tickets are also available.