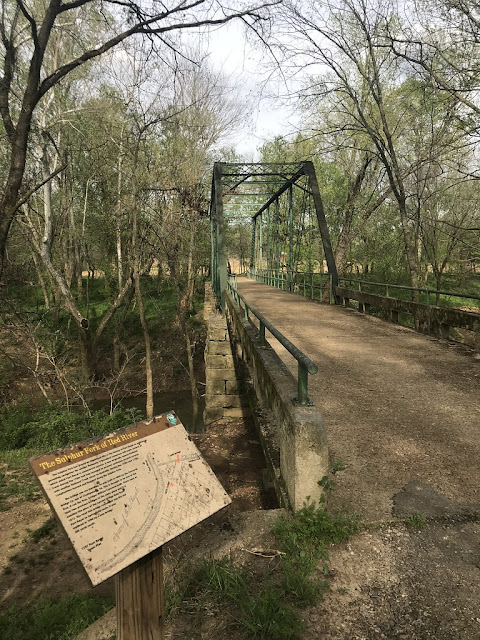 At 30 acres, Tennessee's Port Royal State Historic Park is one of the state's smallest.  However, this little park off of TN 238 east of Clarksville makes up for its size with its history.

The site of one of the earliest pioneer outposts in Middle Tennessee, Port Royal sits along the Red River between Clarksville and Springfield.  Its location along the Red River and several stagecoach lines made the tiny village a hub during the early days of westward expansion.

In addition to stagecoach lines, Port Royal would also be a stop for steamboats along the Red River in the 1830s.  As railroads became the primary mode of transportation during the 19th century, Port Royal would begin to lose its importance as a transportation hub.
As the town transitioned, a two story building, the Masonic Lodge, was constructed in 1859.  The lodge was housed on the second floor while the first floor served as a general store, post office, and even a telephone exchange.  In 1921, a tornado severely damaged the building and the decision was made to have it remain as a one story building.  Once the post office and general store closed, the building sat abandoned for decades.  The state of Tennessee has restored the 160 year old building to its original state and the hope is to make it a visitor's center for the park.

Because of its location on the Red River and Suplhur Creek, there have been a number of bridges that cross here.  The remains of a former covered bridge and a still standing 130 year Pratt truss bridge are two of the features for this park.

The 1890 Pratt Truss Bridge over Sulphur Creek is part of the park grounds and pedestrians can still cross it.  The bridge was built by the Converse Bridge Company out of Chattanooga.  The company, owned by William Converse, would continue to manufacture bridges into the 1920s.

The bridge would carry vehicles until a new bridge was constructed 300 yards south and opened in 1990.

Remnants of two other bridges that once crossed the Red River are also on site.  In 1903, construction began on a covered bridge over the Red River.  Normally, this would not be significant, but the contractor building the bridge decided to not include a center pier for the bridge.  The bridge collapsed during construction and one worker was killed.

Construction on a second covered bridge with a middle pier soon began afterwards.  This bridge would remain open until 1955 when the current concrete bridge that carries Tennessee Highway 238 was completed.
This bridge would remain standing until it eventually collapsed after flooding in 1972.  A replica bridge was built in the late 1970s.   Most of that bridge was destroyed in a 1998 flood.  The remaining section of the bridge would be destroyed when the Red River flooded again in 2010.  All that remains are the stone piers on one side of the bridge and a pile of rubble from where the middle pier once stood.

Another historically significant part of the park is a preserved section of the Trail of Tears National Historic Trail on the Western Side of the Red River.

The "Trail of Tears" refers to the journey over 100,000 Native Americans made from their native lands east of the Mississippi westward to "Indian Territory" (modern day Oklahoma) as a result of the Indian Removal Act of 1830.  This forced removal was extremely devastating to many tribes as numerous (some estimates well over 10,000) died during the march west.

The approximately 300 yard long trail section runs on the western side of the river from a parking area down to the banks of the Red River.
All photos taken by post author - April 2019.