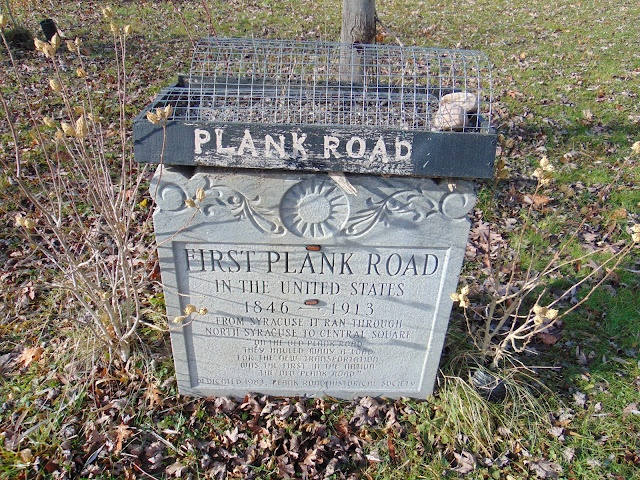 In the early to mid 19th Century, many roadways were once dirt paths, often causing a bumpy ride for stagecoaches and carriages that needed to get between locations. The roads were often rutted and muddy due to long stretches of inclement weather. In trying to find a solution to the problems that the dirt roads had, a movement at that time called for the building of wooden roads, or plank roads. With plank roads, wooden boards were laid over the roadway on log foundations of various lengths. Wood planking was chosen as the material because timber was abundant along the route and because planks wouldn’t break up in the winter thaws or wash away in the spring.

Central New York State, and more specifically between Syracuse and Central Square on what would later become part of US 11, has the distinction of being the site of the first plank road in the United States, following the lead of plank roads that had already been built in Canada, around Toronto, Ontario. The plank road extended from Salina, at the same intersection where Crouse-Hinds was later built, through the modern day settlements of North Syracuse, Cicero and Brewerton, up to the village of Central Square, in Oswego County. The plank road roughly followed the path that Native Americans had used to travel from Pennsylvania to the St. Lawrence River, which was called the Thousand Island Trail. Later, the New York State Legislature had the same route cleared, calling it the Salt Road.

On April 12, 1844 the Salt Road was taken over by the Salina and Central Square Plank Road Company. The first plank road in the United States was finished and ready for travel on July 18, 1846. At a cost of $23,000, the road was 16.5 miles long and had been planked for its entire length. Thomas Alvord, who was a New York State Legislator, helped secure the passage of an act to construct, maintain and collect tolls. There were four tollgates about four miles apart that were operated by the company which was a profitable enterprise for many years. The fees were 1 cent per head of cattle, 5 cents for a single horse, and 25 cents for a horse and wagon.
This plank road set off the plank road boom of the mid 19th Century, which began in Central New York and spread, quickly but briefly, across the Eastern United States. The promise of smooth wooden roads that would replace the rutted paths that plagued wagons was enormous. The roads would be arteries linking farms and cities to the wealth promised by both the the Erie Canal and the rapidly growing railroad network that would eventually link the East Coast with the West Coast and everything in between. Plank roads were even called "farmers' railroads" as it would let a farmer haul produce to market "in weather when he would otherwise be imprisoned at home."

There was a dirt side and planked side to the road. The east side was dirt and the west side planked 3 inches thick by 8 feet long. Loaded wagons had the right of way on the planked side, the other side being reserved for empty wagons, single horses and for passing. Bicycles used the plank side on Sunday for racing. Due to wear and tear by horseshoes and iron hoops on wagon wheels, a work crew was constantly busy making repairs.

Eventually, plank roads were built between nearby towns such as Tully and Cortland, Oswego, Camillus and Elbridge, Fayetteville and Manlius, and one between Jordan and Skaneateles.  Warren Street in downtown Syracuse was originally a double plank road. Through the peak of the boom, from the mid-1840s to the early 1850s, more than 3,000 miles of wooden roads were built or chartered in New York state alone -- more than enough to stretch from coast to coast. About 1,400 plank road companies were incorporated in 15 states.

Within a decade, the plank road bubble burst. The initial enthusiasm faded as problems with the roads mounted. The boards that were supposed to last 7 to 12 years had to be replaced in 3 or 4 years. Horses and wagons, and a wet, snowy climate ruined the planks faster than expected. Upkeep of the plank roads were too expensive, and investors lost money on lower than expected toll revenues. One man in Albany, New York lost nearly all of his $900 investment, finding that his investment care without paying dividends and leaving heavy debts. The planks were removed gradually, first from Central Square to Brewerton in 1873, then from Brewerton to Cicero three years later, and finally from Cicero to the Syracuse city line. The road was paved in 1914, and the road later became what is known today as US 11.

As one more grand economic development scheme was ground into dust, the victim of the famously snowy Upstate New York winters and overly optimistic predictions that in retrospect might have been too good to be true. The plank road craze, lasted little more than a decade. Today, there is just one real monument to the first plank road in the United States, just off of US 11 on the roadway to an apartment complex in North Syracuse.