Nexus of the Universe; the Bulter, California ghost town site

By Challenger Tom March 30, 2018
Near the far flung eastern expanses of the city of Fresno in a County Island there is a roadside oddity along Butler Avenue.  Just west of the junction with Fowler Avenue there is a cross-street signed as Butler/Butler. 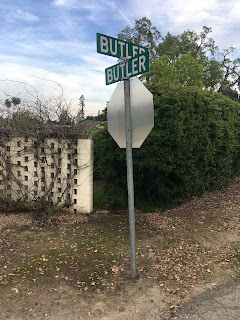 If you are a Seinfeld fan you'd might consider a junction where a street intersects with itself to be the "nexus of the universe."  Howsoever it appears the Butler/Butler street blade signage is simply the result of Fresno County not often signing; street, place, lane, road, drive, or boulevard for whatever reason.  However, the location of Butler/Butler is approximately located a half mile north of the Butler ghost town site.  Butler was located on the Southern Pacific Railroad line heading east out of downtown Fresno towards Sanger. 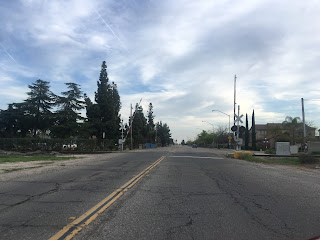 Butler was a rail siding town along the Stockton and Tulare Railroad which was apparently built likely in 1887.  The first map reference to Butler I can find is on the 1889 map of the State of California.

Butler appears to have been a sizeable settlement as evidenced by this sectional of a large Fresno County Map below from 1891.

The last map reference I can find for Bulter was on the 1935 California Division of Highways Fresno County map.  Additional sidings east of Butler can be seen and were called; Locans, Ivesta, and Clotho.