By Doug March 04, 2018
NY 3 between Hannibal and Fulton was placed on a new alignment during the late 1960s/early 1970s, possibly as part of the US/NY 104 super-two project that took place in the time. This page has photos of the old alignment of NY 3 in Hannibal. The old alignment is now known as Oswego CR 3. There is a dead end of Oswego CR 3 around where NY 3 and NY 104 currently intersect.

When I had this information on a page on a former website I used to help operate a number of years ago, I received an email from a gentleman by the name of Daniel Harmony who helped provide some additional background information for me. The information he provided was as follows:

"I was reading the narration you have posted concerning the western end of Oswego County 3, formerly NY 3, at Hannibal. The directional sign to the new NY 3 was installed at the time the new road opened. The roadway itself had been used to move traffic back and forth from the new alignment to the old during the construction phase. What you referred to as a driveway at the western end of CR 3 was built as a turn around (perhaps for motorists who missed the NY 3 directional). This was part of the original construction. I assume its true purpose was for snow plows to turn. When the new highway was built, the alignment entering the village was changed radically. As your picture shows, the original alignment was straight into the village from the old road. This was a particularly rough section of road with a narrow bridge just before entering the main square in the village.

By the way, up until some time in the early 1980's (I think), NY 3 ended in Hannibal. It had ended at the junction with US 104 when that road also ran through the village up until the early 1960's. NY 3 was extended west to NY 104A at Crocketts when a plan surfaced to construct some chemical waste disposal plant at the site of what was to have been the Sterling Nuclear Plant. One of the objections raised was that there was no adequate roadway to get to I-90. The state took over what had been town-maintained roads and did a total rebuild following the 1984 Transportation Bond Act (Rebuilding New York program)." 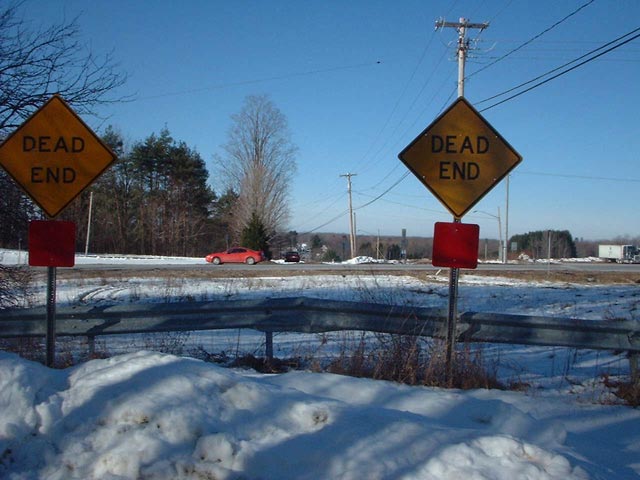