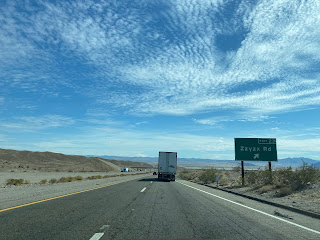 Interstate 15 Exit 239 in the Mojave Desert of northern San Bernardino County, California accesses the well known oddity of Zzyzx Road.  Zzyzx Road connects 4.5 miles from Interstate 15 to a small community of the same name which is located on the shore of the dry Soda Lake.  "Zzyzx" was coined in 1944 by Curtis Howe Springer as what he promoted as to be last word in the English Language.  On the surface Zzyzx appears to be something of a modern invention but the area has significant overall historical importance as part of a transportation corridor through the Mojave Desert.  Zzyzx lies at a point which was the intersection of the Mojave Road of the 19th Century the Tonopah & Tidewater Railroad of the early 20th Century.
The backstory of Soda Springs, the Mojave Road, Tonopah & Tidewater Railroad and Zzyzx
The present site of Zzyzx is located upon a natural spring along the western shore of Soda Dry Lake.  This spring has historically been known as "Soda Springs' and is known to be a prehistoric quarry site.  Soda Lake is notable due to it being located at the mouth of the Mojave River which in turn made it an attractive way point for travel.  Soda Springs and Soda Lake were part of a Native American trail across the Mojave Desert westward from Mohave Valley (on the Colorado River in what is now Arizona) towards the San Bernardino Mountains.  From Soda Lake the trail turned southwest following the Mojave River towards what is now modern day Barstow and Victorville.  In time the trail past Soda Springs and Soda Lake would come to be known as the Mohave Trail.
The Mohave Trail was first explored by Europeans in 1776 during the Spanish Las Californias time period by Missionary Francisco Garces.   During 1826 in the era of Mexican Alta California the Mohave Trail was explored by a party led by American fur trapper Jedediah Smith.  The Mohave Trail was later used by American and New Mexican traders from 1829-1848 when it came to be known as the Old Spanish Trail.  For a time the route from Mohave Valley west towards Soda Lake was considered the primary route of the Old Spanish Trail.
When the American Period of California began the Old Spanish Trail was still in regular use from Mohave Valley west to Soda Lake as an alternative route.  The mainline of the Old Spanish Trail had shifted to a more direct trail southwest from Las Vegas Valley to Soda Lake.  In 1857 the trail from Mohave Valley westward to Soda Lake was ordered by the War Department of the United States to be incorporated into a wagon route as a segment of Edward Fitzgerald Beale's Wagon Road.  This new wagon road from Mohave Valley westward past Soda Lake subsequently came to be known as the Mojave Road.  The Mojave Road terminated at the Old Spanish Trail (by then also known as the Mormon Road) west of Soda Lake which continued inland towards Cajon Pass and Fort Tejon Pass (modern Tejon Pass).  What would become the Mojave Road can be seen converging with then mainline of the Old Spanish Trail on the 1857 Britton & Rey's Map of California.   Notably; what is now Soda Lake can be seen as "Sink of the Mohave." 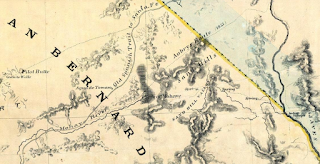 During the 1860 Bitter Springs Expedition the site of Soda Springs was briefly occupied by the United States Army.   The 1860 Bitter Springs Expedition was spurred from Fort Tejon following an attack on travelers on the Los Angeles-Salt Lake Road (what was known as the Old Spanish Trail and Mormon Road) which was suspected to be the responsibility of Southern Piute tribal members.  Soda Springs was subsequently occupied by an Army Garrison as part of Camp Soda Springs from 1867-1870.   The 1873 Bancroft's Map of California, Nevada, Utah and Arizona shows the Mojave Road during it's prime.  Camp Cady can be seen on the Mojave Road just east of the junction with the Los Angeles-Salt Lake Road near the site of Soda Lake.   Camp Cady was occupied from 1866-1871 for the same purpose as Camp Soda Lake; to protect travelers from attack on Mojave Road.  The junction of the Los Angeles-Salt Lake Road and Mojave Road came to be known as "Forks of the Road." 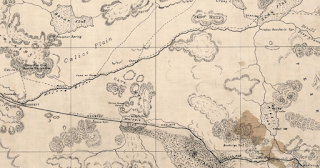 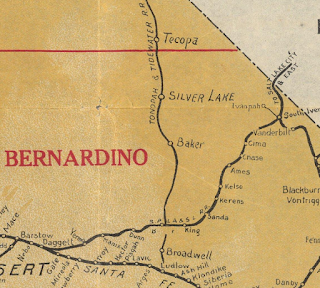 Soda Springs is shown on the Tonopah & Tidewater Railroad as "Soda Lake" on the 1926 Official Railroad Map of California.  Note; the nearby siding of Rasor was the source of the name for Rasor Road which can be accessed via Interstate 15 Exit 233. 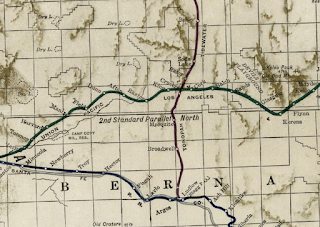 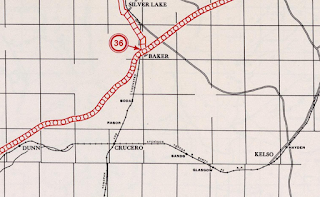 As noted in the intro Soda Springs was renamed by Curtis Howe Springer in 1944 to Zzyzx.  Springer established the Zzyzx Mineral Springs & Health Spa and filed 12,000 acres of mining claims around the former Tonopah & Tidewater Railroad siding facility.   The facility at Zzyzx included a two floor castle, large dining hall and animal attractions.  Zzyzx was known for it's bottled mineral water which was sold on site by Springer.  The fortunes of Springer and Zzyzx would begin to decline in the 1960s when the quality of his products came into question.  Springer was eventually accused of tax evasion by the Internal Revenue Service and false advertising by the Food & Drug Administration.
In 1974 Springer's mining claims were challenged by the Bureau of Land Management and Zzyzx was seized by the Federal Government.   In 1976 the Federal Government permitted California State University to begin operating their Desert Studies Center at Zzyzx.  On October 31st, 1994 the Mojave National Preserve was created which absorbed Zzyzx into it's boundaries.   Today Zzyzx is jointly managed by the National Park Service and California State University.  In recent decades Zzyzx Road has been the subject of a song and several bad movies (one reported to have only grossed $30 dollars). 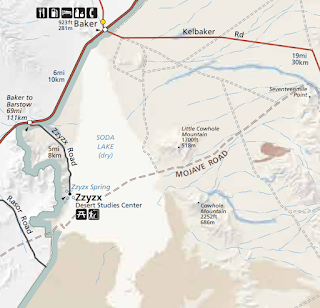 More regarding the history of the Springer resort can be found on the NPS.gov page on Zzyzx.
The pool house ruins at Zzyzx as seen on NPS.gov. 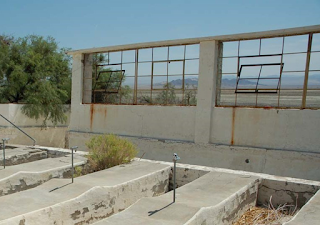 A public domain photo from Wikipedia showing the main complex at Zzyzx. 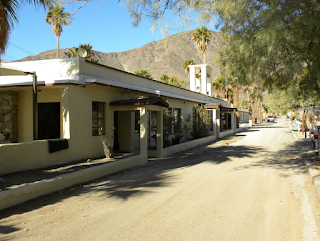 An overlook of the Desert Studies Center at Zzyzx as seem on the Cal-State Fullerton webpage. 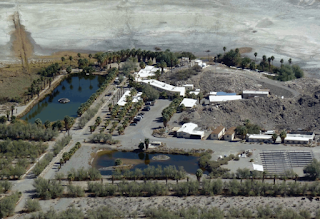 The grade of the Tonopah & Tidewater Railroad can be easily observed in Soda Lake branching north from Zzyzx towards Baker. 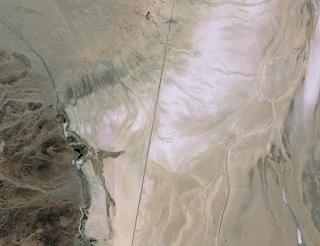