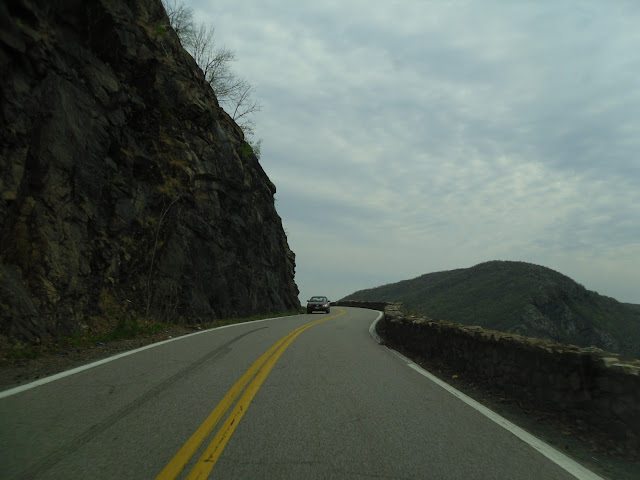 The Hudson Valley of New York State has some amazing and beautiful roads that dot the landscape, from parkways that transcend from grand suburban and urban landscapes to acres of bountiful parkland, along with roads built right on the edge of mountains that drop into the depths of the Hudson River. The Storm King Highway, stretching roughly three miles on NY 218 from around West Point along the slope of Storm King Mountain up to the riverside burg of Cornwall-on-Hudson, is one of the latter. Blasted out of solid rock in the 1920s, the twisty Storm King Highway is built upon the sheer cliffs that jut up high above the Hudson River, making the road quite technical to navigate. But the trade-off is that the views along the highway are simply first rate.

Plans to build the road were approved in 1914, but highway construction did not start until 1919 due to World War I. Construction of the Storm King Highway was expensive, totaling roughly $1.5 million dollars when it was all said and done. Just to lay out the route for the highway, surveyors had to rappel down the mountain’s cliffs in places in order to mark the future routing of the highway. The first contractor chosen to build the highway went into bankruptcy while the second contractor ran into labor troubles when all the available workmen went off into World War I. But when the highway was finally opened to traffic in September 1922 to scores of automobilists, it dramatically shortened the driving distances for residents of the area. The same year, Dr. Ernest G. Stillman gave about 800 acres of land around Storm King Mountain to the Palisades Interstate Park Commission to preserve the scenic surroundings of the Storm King Highway, now part of Storm King State Park. This was an act that put the Storm King Highway entirely within park lands.

This engineering marvel does not get the fanfare it once had, but it is still a beloved stretch of highway. In 1940, the four lane Storm King Bypass opened to the west of Storm King Mountain, taking US 9W with it. It is still a state touring route, carrying the NY 218 designation. But preserving the land and scenic vistas around the Storm King Highway remained a priority. In 1962, the Consolidated Edison Company of New York (Con Edison) announced a proposal to build a pumped storage generating plant at Storm King. This proposal launched one of the major environmental battles of this century, which in turn contributed to a rebirth of interest in the Hudson and the formation of the Scenic Hudson Preservation Conference (today known as Scenic Hudson) to oppose Con Edison and had protested against construction of a pumped storage facility at Storm King Mountain. The generating plant was abandoned in 1979. In 1982, the Storm King Highway was added to the National Register of Historic Places due to its engineering significance.

Today, the Storm King Highway is a scenic way to enjoy the Hudson Highlands, a place where the tides of the Atlantic cut through the Appalachians. After all, the Hudson River is a tidal estuary as far north as Troy. In winter and in times of bad weather, the road is gated off as the highway is susceptible to avalanches and other debris eroding off of Storm King Mountain. But it is an epic way to enjoy a wonderful place. Enjoy the twists and turns of the highway!