By Adam September 02, 2019
Located no more than one half mile apart and sandwiched between Interstate 65, US 31W, and US 41 in Goodlettsville, Tennessee are two stone arch bridges that were once a part of the Louisville & Nashville Turnpike.  The bridges were most likely built in the late 1830s and for decades carried numerous stagecoaches between the cities.

The two bridges are located off of the fittingly called Old Stone Bridge Road and cross two different creeks, Manskers and Slaters.  With the nearby railroad, Dixie Highway, and Interstate, examples from a number of eras in our nation's transportation history can be found within less than one square mile. The first bridge is known as the Old Stone Bridge and can be found immediately off of US 31W/41.  The two arch bridge is approximately 90 feet long and crosses Manskers Creek.

About a quarter mile up the road is the second stone bridge - known as the Turnpike Bridge.  This bridge is at the end of Old Stone Bridge Road and access out leads to an abandoned lot from the US 31W/Interstate 65 Interchange.  This lot can sometimes be fenced off so be wary that you may need to turn around and go back. 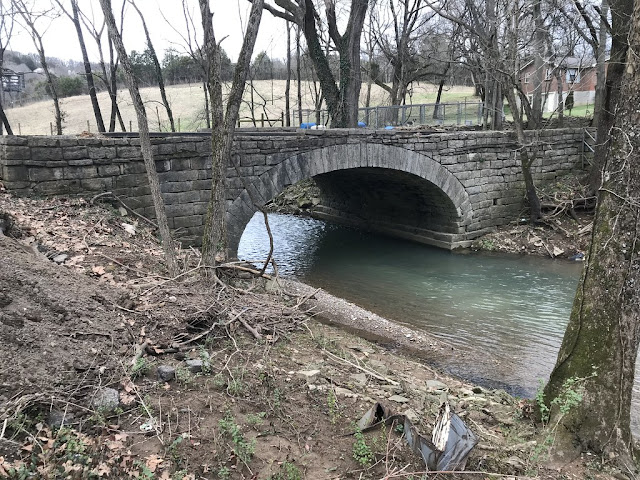 The Turnpike Bridge is a 57 foot long stone arch crossing Slaters Creek.  It was most likely built at the same time as its sister bridge to the south.