By Challenger Tom September 22, 2019
One of the more intriguing mysteries of the early US Route System in California is where the original south terminus of US Route 91 was intended to be located in the Mojave Desert.  This blog is a little different than my usual behind the wheel fare and explores why US Route 91 ultimately ended at US Route 66 in Daggett instead of Bannock. 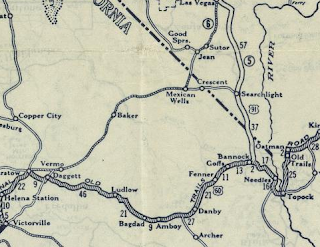 What ultimately became the US Route System was first discussed during the American Association of State Highway Officials ("AASHO") during their annual 1924 meeting.  Ultimately the AASHO recommended to the Department of Agriculture to work with the States to develop a system of Interstate Highways to replace the many Auto Trails in use.  The Joint Board on Interstate Highways was ultimately commissioned by the Department of Agriculture and it's branch agency the Bureau of Public Roads in March of 1925.  The Joint Board on Interstate Highways first met in April of 1925 and decided on the new interstate road network would be known as "U.S. Highways."

During the drafting phases of the US Route System in 1925 the Joint Board on Interstate Highways ultimately decided several facets of what would become it's numbering convention:

Report of Joint Board on Interstate Highways; October 30th, 1925

While the US Route System submitted in October of 1925 was fairly close to what was implemented in November of 1926 there was some significant differences.  The most glaring or "well known" difference is that US 60 was planned on the routing which ultimately became US 66.  Regarding US 91 the routing points were clear aside from the southern terminus in the Mojave Desert of California.  In the October of 1925 submitted by the Joint Board on Interstate Highways US 91 is shown simply as ending at US 60:

The planned route of US 91 south from Great Falls, Montana to Las Vegas, Nevada is very clear in the 1925 Report.  That said, south of Las Vegas the routing of US 91 was at best open to interpretation.  Ultimately two existing roads south of Las Vegas to what was planned as US 60 were immediately available; the Los Angeles-Salt Lake Road which was part of the Arrowhead Trail southwest towards Daggett or it's former alignment which was aligned directly south into California to Bannock.  The older alignment of the Arrowhead Trail was also signed as the National Park-to-Park Highway and Evergreen National Highway.  On the 1924 Rand McNally Map of California below the Arrowhead Trail is listed as "18," the National Park-to-Park Highway as "20" and Evergreen National Highway as "64." 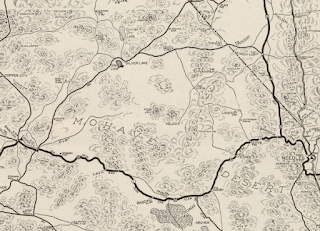 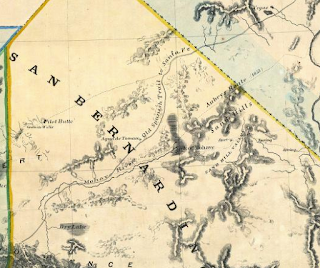 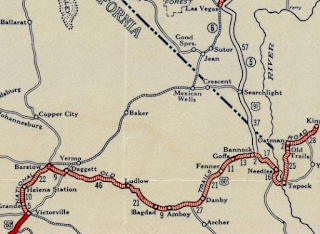 Ultimately what drove the decision to route US 91 via the Arrowhead Trail to Daggett appears to be the extension of Legislative Route 31 ("LRN 31") by the California Legislature. According to CAhighways.org LRN 31 was first adopted as a State Highway during the 1916 Second State Highway Bond Act between the San Bernardino County line northeast to Barstow.  In 1925 the Legislature approved an extension of LRN 31 from Barstow to the Nevada State Line.

The new extension of LRN 31 from Barstow to the Nevada State Line appears as an unbuilt Legislative Act Road on the 1926 California Highway Commission Map. 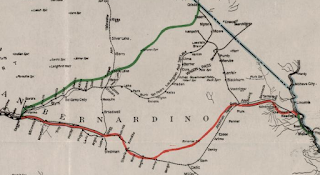 The 1927 National Map Company Sectional Map shows US 91 entering California via NV 6 southwest over what had been the Arrowhead Trail.  US 91 is shown traversing through the Mojave Desert via; Francis Springs, Silver Lake, and Bitter Spring headed southwest to Daggett and US 66. 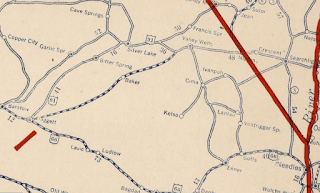 The 1927 State of Nevada Department of Highways Map shows US 91 entering California via NV 6 and using the Arrowhead Trail via Silver Lake. 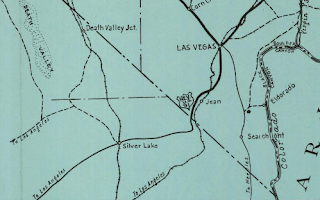 The 1930 Division of Highways Map of California shows US 91 routed onto a partially completed and largely unimproved route of LRN 31 from Barstow via Baker.

The AASHO Database shows that the California State Highway Engineer sent a letter to the AASHO Executive Committee on  January 24th, 1930 requesting that the south terminus of US 91 be moved from Daggett to Barstow.  The existing US 91/LRN 31 between Yermo and Daggett was slated to be relinquished as a State Highway. 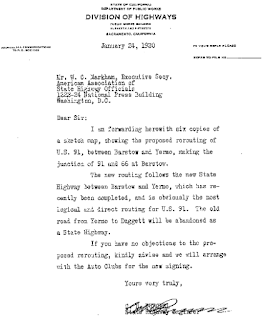 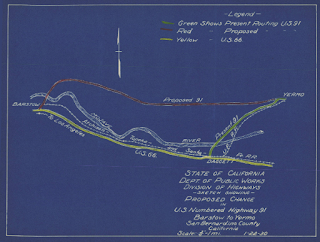 According to a letter sent to the California State Highway Engineer dated November 11th, 1930 the AASHO Executive Committee approved changing the terminus of US 91 from Daggett to Barstow on May 25th, 1930.  Strangely the AASHO did not advise the California State Highway Engineer of the their approval of the terminus change to US 91 (seems familiar in the context of modern email). 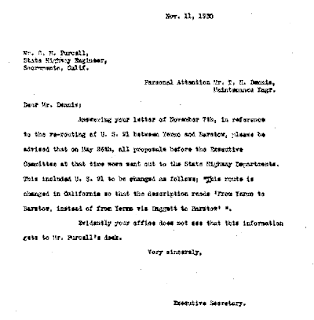 The 1934 Division of Highways Map of California shows US 91 mostly paved and fulled graded on LRN 31 between Barstow and Baker. 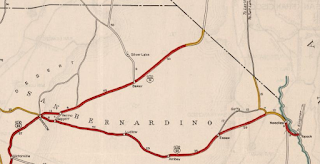 Of note; the initially planned route of US 91 to US 66 near Bannock was adopted as LRN 146 in 1933 according to CAhighways.org.   In 1934 this new segment of State Highway would become part of the first CA 195 which ultimately became a US Route by way of US 95 in 1940 when it was extended to Blythe, California.

Regarding the former alignment of US 91 on the Arrowhead Trail much of the roadway appears to still exist in Fort Irwin National Training Center.  It isn't clear if US 91 was actually signed on the route of the Arrowhead Trail or to Daggett but it is probably likely given most US Routes in California were fully signed by the Automobile Club of Southern California and California State Automobile Association by 1928.  The remainder of the endpoint history of US Route 91 can be found on USends.com.  In 2012 I took a picture of US 95 meeting the former alignment of US 66 near Bannock on what could have been the south terminus of US 91 at US 60.  Appropriately said junction is known today as "Arrowhead Junction." 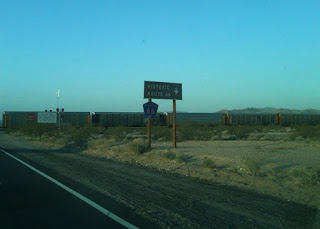