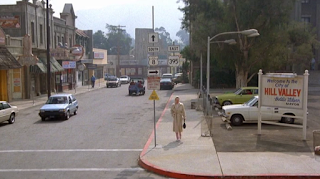 The above photo is part of the intro scene to the first Back-to-the-Future movie which was set in 1985. To anyone who follows roadways the signage error of US 8 meeting US 395 in California is an immediately notable error.  For one; US 8 doesn't even exist anywhere near California with present alignment being signed as an east/west highway between Norway, Michigan and Forest Lake, Minnesota.  To make matters worse US 8 is signed as a southbound route and US 395 (a north/south highway) is signed as an eastbound route.  At minimum the cut-out US 8 and US 395 shields somewhat resemble what Caltrans used in the 1980s.

Assuming Hill Valley is located on what would have been US 395 by 1985 what locales would be a viable real world analog?  US 395 in California presently runs from the Oregon State Line to Nevada State Line  US 395 traverses eastern Nevada before reentering California running along the eastern flank of the Sierras to I-15 near Hesperia.  California State Route 8 would have gotten somewhat close to US 395 at the Nevada State Line.  Interstate 8 obviously doesn't work since the Route 8 displayed in Hill Valley is signed as a through surface route.  None of the Signed County Routes of A8, D8, E8, G8, J8, N8 and S8 even remotely come close to US 395.  For reference US Route 395 was cut back to it's current terminus at I-15 near Hesperia at some point after 1975.  For real world map references of the truncation of US 395 see the article below regarding the history of the Cabrillo Freeway:

California State Route 163;Old US Route 395 on the Cabrillo Freeway

Digging even deeper into Legislative Route Numbers prior to the 1964 State Highway Renumbering LRN 8 doesn't fit the bill either.  LRN 8 was defined in 1909 as a highway spanning from Ignacio (modern Novato) to Napa which are nowhere close to the corridor of US 395.  LRN 8 today is part of CA 37, CA 121 and CA 12.

One might assume that the US 8 shield was an error for US 6 which would place Hill Valley as an analog for Bishop of Inyo County.  US 6 used to multiplex US 395 south of Bishop until the 1964 State Highway Renumbering truncated it's present location.  The main problem with the US 6 theory is that the 1885 railroad map from Back-to-the-Future Part III which displays Hill Valley has it located on the Central Pacific Railroad in the Sierra Nevada Mountains. 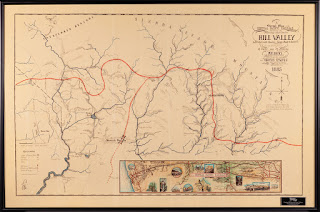 The only US Routes which would have in theory connected with the route of the Central Pacific would have been US 40 and US 99E.  With all the above in mind, the grand conclusion about the location of Hill Valley after looking into a little bit of highway and rail history that it is simply movie gibberish.  The fact that Hill Valley is located within walking distance of a desert complicates matters further since none of the Central Pacific route in California came close to such terrain.  While the Back-to-the-Future movies series is unarguably a classic it just goes to show that locations often depicted in popular media often fall far short in the area of proper highway signage.

Incidentally the current prop structure on the Universal Studios back lot doesn't really resemble how it looks in the Back-to-the-Future movies anymore. Anonymous said…
The back lot at Universal Studios burned somewhere around 2007. The fire included the original BTTF courthouse set. When Universal rebuilt the burned area, the new courthouse didn't look like the old one
5:18 PM

Anonymous said…
Isn't Auburn or Grass Valley halfway from Sacramento and Reno be candidates for the fictional Hill Valley though?
10:49 AM

Anonymous said…
I had been searching the map for clues, understand that it is in the northern Sierra Nevada, where US 395 meets a rail line bound for San Francisco. It must be within a desert region in a valley.

Best candidate for Hill Valley is Doyle, California, an unincorporated place that's practically a ghost town by now. Been a cattle ranch area, some ranches still appear to be operating. Not inconceivable this area could, in another time and place, be a thriving town.

It is in a valley in the Northern Sierra Nevada, highway 395 passes through, as does a rail line bound for San Francisco. Main problem is, the BTTF III map shows the rail line going east-west, it goes north-south through Doyle. Then again, since US 395 had been flipped, one could say they mixed up their directions.
11:21 PM