By Bob Malme June 15, 2012
Last Sunday Adam Prince, Chris Allen, and myself took an extended road trip taking in the Future I-73 Corridor from southern VA to Greensboro, Future I-74 SE of High Point and I-73/I-74 south of Randleman to Ellerbe. I will post some comments and photos from the I-74 and I-73/74 around Asheboro portions of our trip and will post the rest of the information on a revised, and revived, version of my I-73/I-74 pages to appear in the near future on Gribblenation.com.

1. I-74 Construction between Cedar Square Rd and US 220--
As most of you know, construction on the last piece of I-74 to be built along the 'US 311 Bypass' is set to be completed in October. Observations taken from the road trip suggest this may now be an optimistic date. Work has moved along at the northern section of the construction area. The roadbed is paved south from Cedar Square Rd to at least a mile south. This was the case when I visited the area last October. Things aren't as complete further south-- 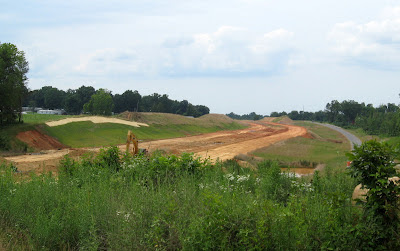 As you can see, not only is the area not paved, the grading has not been completed. That is because the current roadbed of Branson Davis Rd is still in the way-- 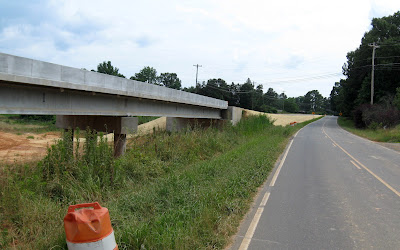 The roadbed cannot be demolished until the bridge is complete and traffic can be re-routed. Some good news here, this now looks like it may happen this weekend, based on an e-mail from a local source I got this afternoon. A closer look at the area west of the bridge shows a lot of work still needs to be done-- 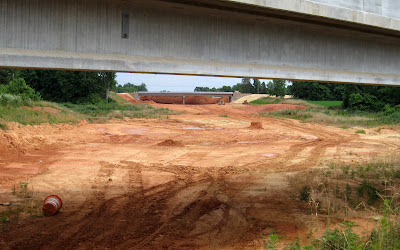 This is a view under the bridge towards the other bridge under construction at Walker Mill Rd. (more below). The Branson Davis bridge appeared close to completion, confirmed if it is to open this weekend: 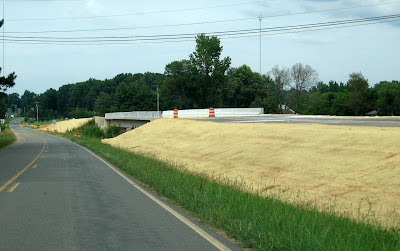 We didn't know it at the time, but apparently we were apparently one of the last to travel across the now former Walker Mill Rd. bridge.: 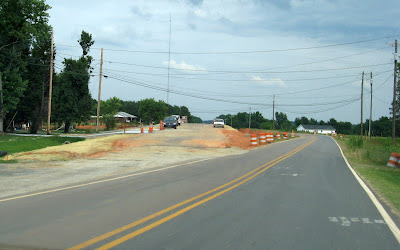 The completed bridge is to the right with only some minor issues remaining. From Walker Mill the I-74 roadbed is paved heading south toward the future US 311 interchange. Here's a view back to the north showing that view: 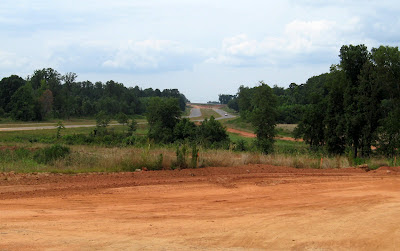 The unpaved roadbed the photo was taken from is the future ramps to and from West I-74. A closer look at the unfinished ramps: 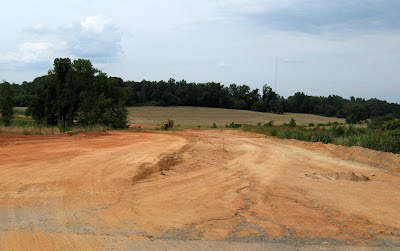 The bridge carrying US 311 was finished in 2010, work has been proceeding on a replacement railroad bridge that is using the old US 311 right of way. There was plenty of traffic at this future interchange location, prompting speculation whether traffic signals are a part of the design.

South of the US 311 interchange we began to get more optimistic again. This is the scene at the Plainfield Rd. bridge looking southeast: 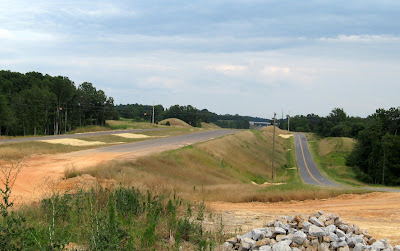 Asphalt picks up again and continues to the end of the project at US 220. The view to the northwest, though not as good, still holds promise: 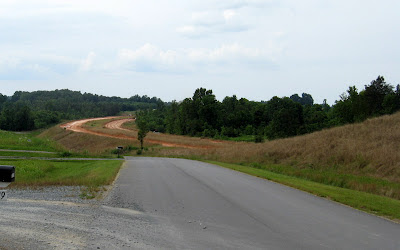 While the roadbed is still not paved, it should be able to have pavement placed soon, perhaps when all the work at US 311 is completed. Here's the view looking back north from the next completed bridge at Heath Dairy Rd: 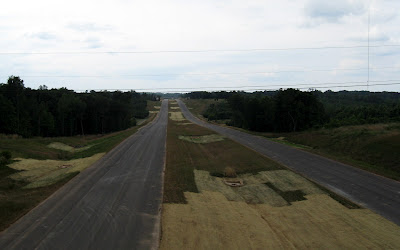 Here the roadbed is paved and work to landscape the median appears to be underway. What was most exciting was the view to the SE and the US 220 interchange. What are those things in the distance-- 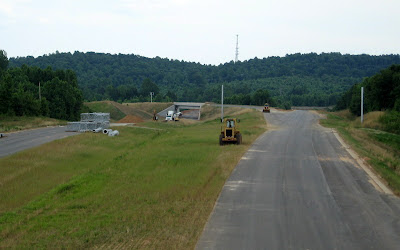 Signs! Or at least the future supports for signs going up at the end of the 311 freeway. What will be on those signs? A trip down through Asheboro provides some clues.

2. US 220 Through Asheboro
US 220 thru Asheboro has been under construction since 2010 to bring the highway up to interstate standards, or more accurately, what the FHWA has deemed close enough to allow the route (and the remaining future I-73/I-74 sections between Greensboro and Ellerbe) to be signed as full interstates. Unlike with I-74, there is optimism here this project can be completed on-time, by this November. 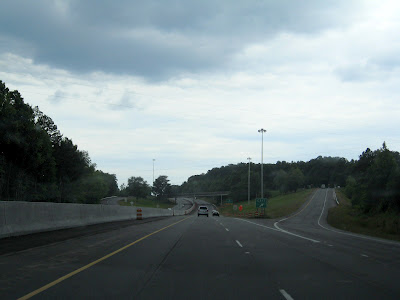 As can be seen in the photo above most of the work between the northern end of the work zone and NC 42 ( a couple miles south) has been completed. The remaining work in this area relates to signage-- 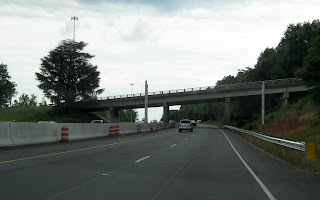 Above are the supports for the future NC 42 interchange related signs that should look like this: 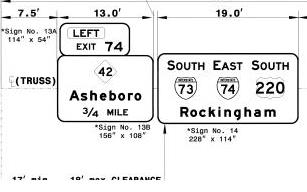 From the NCDOT signage plans. The left exit will be eventually removed in an additional project, currently unfunded, to improve safety through the Asheboro corridor. The only real work continuing is around the NC 42 exit. Here's a view approaching the off ramp: 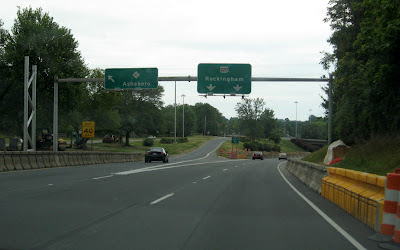 And there's some work needed between the off and on-ramps as well: 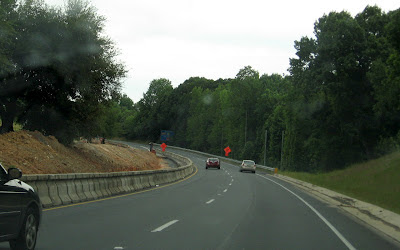 The empty sign posts up ahead are for the next exit, US 64/NC 49. A view of that interchange: 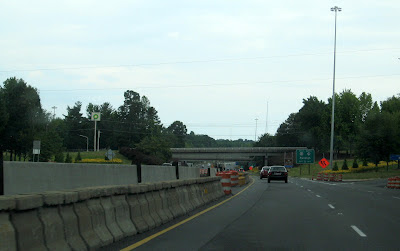 Work is not completed on creating the center Jersey-barrier median that will be used in most of the corridor. The last section under construction is just south of the interchange: 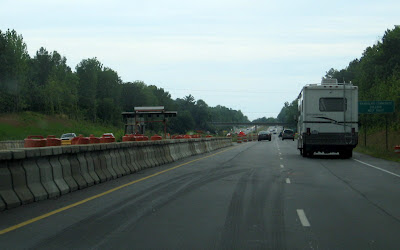 Work has only just started on the median here. The bridge in the distance is for McDowell Rd. Just beyond construction is complete and you are now on I-73-74! 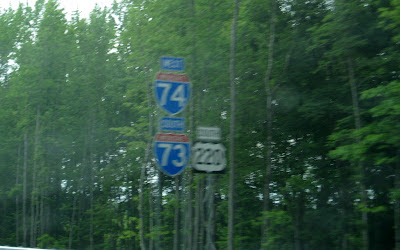 Or is it I-74/I-73, and why is I-74 heading the wrong direction. Oops. Here's what the new assemblies are supposed to look like, this one at the former start of the interstates beyond NC 134: 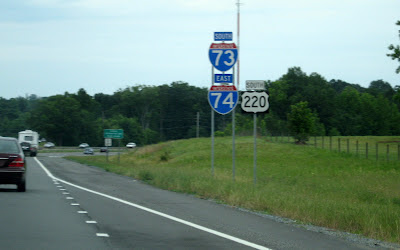 Yes, the shields are really huge, NCDOT spared no expense. Let's hope the rest that go up resemble these and not the first one. To totally convince you that you are on an interstate, mile markers begin-- 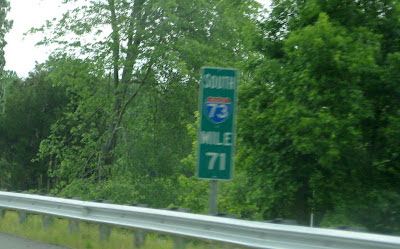 And the milemarkers match the numbers on the new exit signs-- 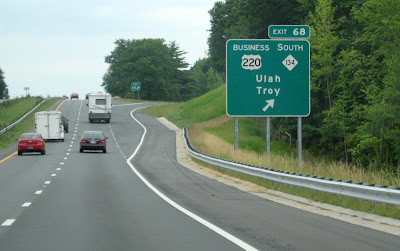 This is now formerly Exit 51. The rest of the exit signs south of here to Ellerbe should have their numbers switched by the end of the summer of 2013. Signs between I-74 in Randleman and the Asheboro construction area may get the new numbers when I-74 is completed. I will post additional photos and updates when my pages go back online.

UPDATE: Adam's photos from this trip can be found here.

Anonymous said…
I am very excited about NCDOT finally signing I-73/I-74 from Elliebe to Greensboro/High Point area. Now, I wonder what about I-74 from High Point to Winston-Salem (I-40)?
2:15 PM