By Bob Malme May 24, 2012
Decided to beat the Memorial Day rush and traveled up I-93 north of Boston Wednesday afternoon to check out the progress of the two sign replacement projects. Based on webcam images, I new some signs had been replaced at the southern and northern end of the Somerville to Exit 38 segment. Turns out signage has been updated northbound for Exit 28 (MA 28/38), the first sign for Exit 31 (MA 16) (I guess taking advantage of MassDOT closing I-93 between Exits 20 and 28 for Big Dig Tunnel maintenance a couple nights a month) and for Exits 34 to 38. A photographic summary starts with the first re-signed exit: 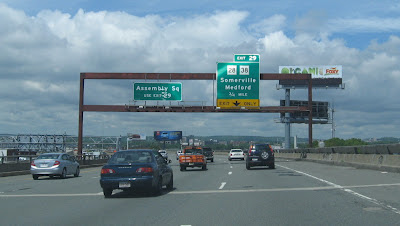 This is the second overhead assembly. The signs are mounted on the previously existing overhead supports that go back to the opening of the lower and upper deck portions of I-93 in the early 1970's. I don't know about using the left hand side simply for an auxiliary sign for the exit, but there isn't much room to place it elsewhere.

The next interchange that  has had all of its signs updated northbound is Exit 34, MA 28: 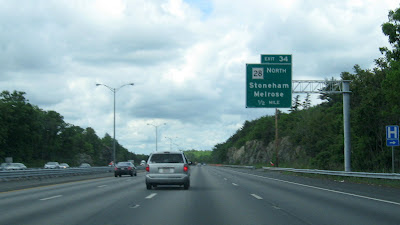 This is the second MA 28 exit in a row, and the third involving the route in the last 6 exits. The new signage at the exit ramp itself : 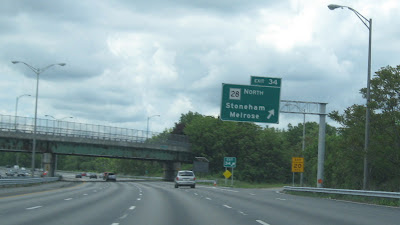 You'll notice that while the signage has been updated, work could be done to improve the painted surfaces of the bridge beyond.

The next exit is for Montvale Avenue: 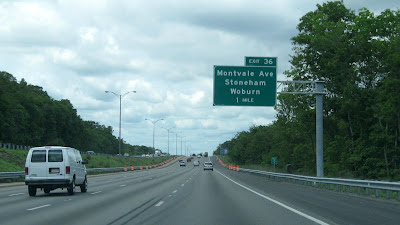 The orange barrels beyond were for the construction crews. They were working in the median over the hill, do not know if it was sign related or not.

Before Montvale Ave. you get the first notice of the upcoming I-95 interchange: 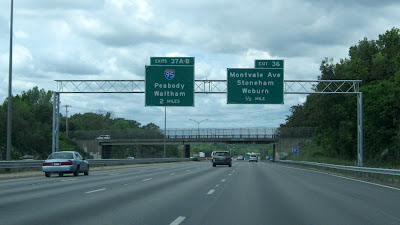 Unlike at the southern I-93/I-95 interchange there are no fancy diagrammatic signs. Given the current cloverleaf design, they are not allowed under MUTCD. Maybe they will appear if the interchange is revised with flyover ramps as MassDOT has proposed. Here's a closeup of the I-93 sign in the distance: 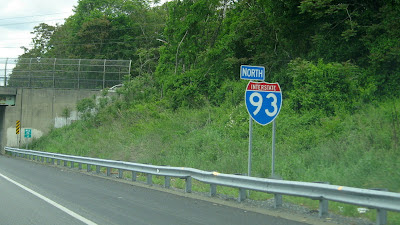 The size of the shield is standard issue for MassDOT, though ironically the new I-95/MA 128 reassurance markers put up for that sign project are both on one post.

The next new sign for Montvale Ave. was obscured by the older overhead assembly that had not been taken down as of yet. Approaching within a mile of the I-95 exit: 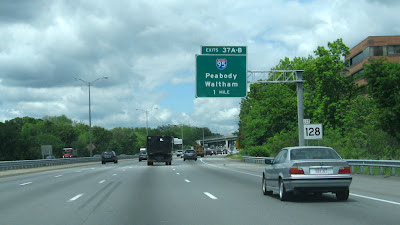 Notice the large auxiliary MA 128 sign. MassDOT sign standards specifically prohibit any '128' shield from accompanying I-95 on highway and approaching highway signage between Canton and Peabody. Only one of the signs approaching the interchange had been put up: 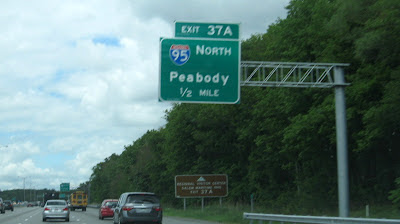 The older sign in the distance was removed a day after this photo was taken. It is interesting that there is only one local control city on the new sign. Other signs along I-95 to the south typically use Portsmouth NH alone or with a local destination. Apparently the FHWA has agreed to letting MassDOT use local cities here. You would think there would be some benefit to having a sign indicating you can take I-95 to access coastal NH or Maine. Perhaps they think all long distance traffic on this part of I-93 originates from the Boston area and those people would take US 1 or know I-95 gets off of 128 in Peabody.

Beyond I-95 there are two more revised signage exits: 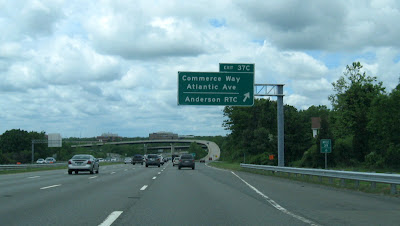 The destinations on these exit signs have expanded beyond the original Commerce Way, with RTC for Regional Transportation Center. Also hope some day this will not be a suffixed exit with the introduction of mile-based exit numbering (more below). The last exit with new signage is that for MA 129: 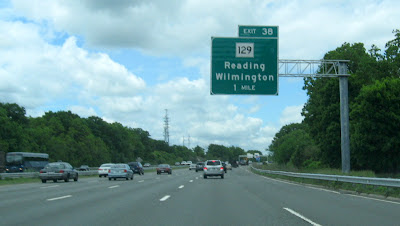 This is the last interchange under the southern replacement contract. To the north there were new foundations placed for the new overhead signs, but nothing more. Turning around to head southbound at Exit 39, I was able to take a picture of the typical MGS or Mass. Guide (or Green) Sign at I-93 on-ramps: 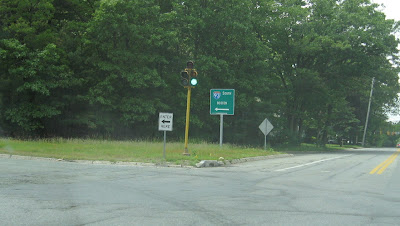 Apparently MassDOT believes Boston is the only destination travelers need to know.

Heading back toward Boston, southbound signs have been replaced from Exits 38 to (the first two for) 35. Starting out beyond Exit 39: 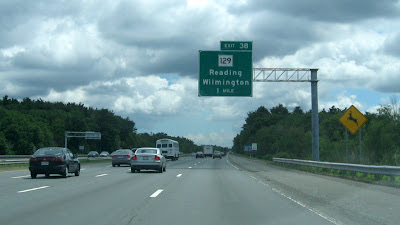 Notice the Deer Crossing sign. If MassDOT was reflecting the reality of the high deer population they would probably have to place on after nearly every exit nowadays. 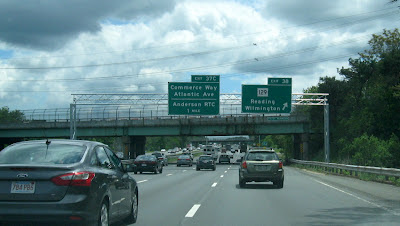 Again the signs look great, but maybe a little repainting of the bridge would be nice. The second overhead assembly for MA 129 introduces I-95 into the mix: 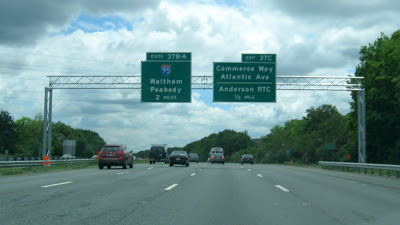 Again I-95 features local control cities, other signs along I-95 to the south have Providence, RI alone or with another local city. Maybe they do not to encourage more traffic along the '128' Belt? Notice the orange contractor tag and barrel have not been removed, perhaps more work needed. 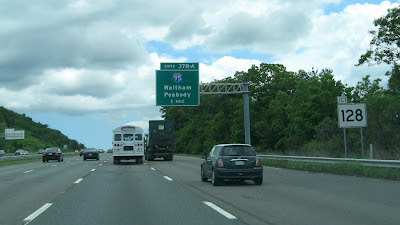 You again have the auxiliary sign for MA 128 off to the right. These signs next appear at the interchange itself: 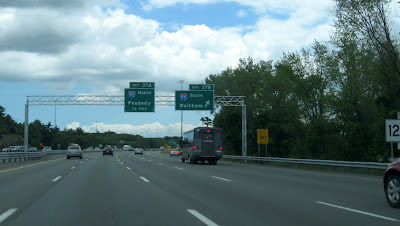 Just a part of one made it at this photo approaching the I-95 South off-ramp. There was not one for the northbound ramp (they are at both ramps heading northbound). The next exit is Montvale Avenue: 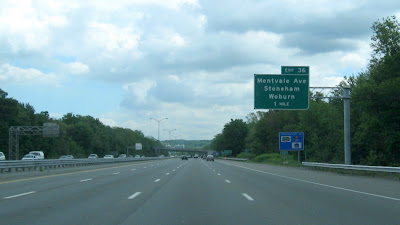 The Series 'E' or Service signs were replaced last year. Does having those replace first indicate the priorities of MassDOT or does it take more effort to plan placing the overheads?

Here's another new I-93 shield: 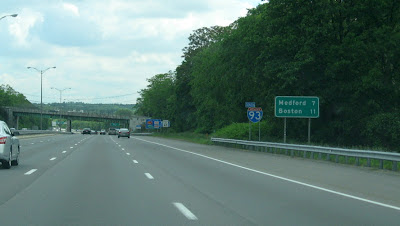 Next to an older Distance sign. I do not know whether these distances are correct, many of the signs put up several years ago had to be corrected because of wrong numbers.

The last exit with new signage is Exit 35: 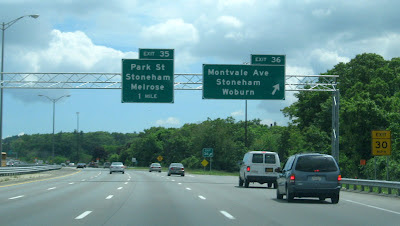 'Park St.' Stoneham/Melrose is a new designation for this exit, the previous sign listing 'Winchester Highlands.' Direct access to this destination, no longer exists, so MassDOT changed it to Stoneham and Melrose as destinations and added Park Street to help differentiate this exit from other Stoneham exits for drivers.

While there were no more new on road signage along this direction until Somerville, they have replaced some of the overhead ramp signage, such as at Exit 33: 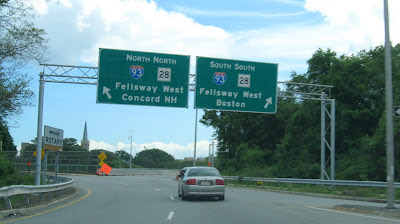 Notice the 'control cities' feature a street name. The street is 'Fellsway West' but might this be confusing to drivers seeing North/West on one sign and South/West on another, thinking it should be 'East'? The next signs are less confusing: 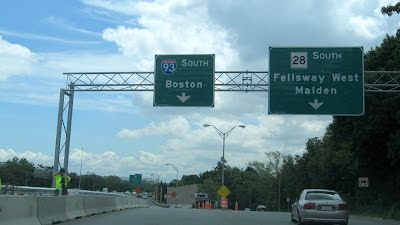 The work on the right is replacing the guardrails at the interchange, part of a project putting up sound barrier walls along this stretch of I-93 (seen in the background).

This last photo is the signage at the Leverett Connector exit: 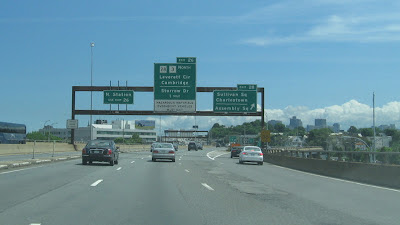 This signage was put up as well, again taking advantage of I-93 Big Dig Tunnel closures, the lower text for Exit 28 is new, with the addition of Assembly Square, a new development going in at the site of an old mall. The Exit 26 signage was relatively new, but the new sign is larger and taller. I also like having part of the Boston skyline in the background. (MA 3 should be US 3 here, if it was up to me).

I always thought that sign update projects like this would be a good time for MassDOT to change to mile-based exit numbering from (somewhat) consecutive exit numbers. Since that has not happened, I thought I'd post what the exit numbers should be for the exits in the southern sign replacement project area:

Anonymous said…
Nice stuff and a lot of it there, thanks for posting! Glad they got all those signs done before Clearview uglybug bit. - David S.
8:14 PM

Amelia K said…
The Disney movie that the Orange Belt corresponds to is Beauty and the Beast. After checking out their 30th anniversary article, I decided to come here and check out your articles. Have you seen that movie yet? I hate to say it, but your character may actually be the most like Gaston! I hate Gaston because he is a bully. But, my favorite character from the movie is Belle. If you have a chance, check out the movie and you will see what I am talking about!
7:33 PM