By Bob Malme December 20, 2010
Since I've moved here to Mass. from NC, things are less exciting on the highway construction front. No one is building new interstates or toll roads, for better or worse. Most of the projects have to do with reconstruction of bridges and adding lanes to existing highways. Of the latter, the major project closest to me is the adding of an additional lane along 'Route 128' from I-93 Exit 4, MA 24 in Randolph north to I-95 Exit 20, MA 9 in Wellesley. The project began several years ago with the replacing and/or widening of bridges to cross 8-lanes of traffic, instead of 6. After bridges in a certain area were replaced, work began on widening the highway and placing new signage, some vastly improved over what previously existed. Bridge work and widening has largely concluded between the end of I-93 to US 1 in Dedham. Bridge work also has been completed along I-93 between exits 4 and 2 and work on widening by replacing the grass median by concrete barriers is continuing. When the barrier work is done, new signs tend to spring up. This is the latest sign to appear: 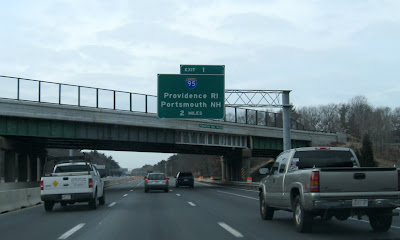 This is an improvement over the former small sign that just had a I-95 shield and '2 Miles' below it. However, it has some problems at the moment. I-93 Exit 1 is for I-95 South to Providence. You don't have to exit for I-95 North. I suspect, given the large space after the 1 on the exit tab, that like the MA 3 north merge onto I-93 North in Braintree which was unlabeled but is now designated as Exit 20A, and with the beginning of I-93 a non-ramp 3 lane 'Exit 12,' that eventually this exit sign will say Exits 1A and B and by not exiting onto current Exit 1 you'll be taking 'Exit 1A' onto I-95 North.

Here are the next set of new signs southbound, which went up about a month ago: 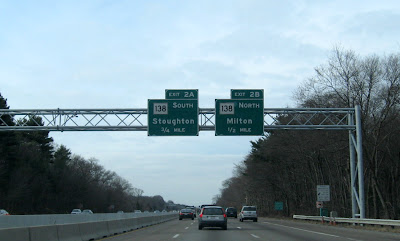 These are fine, except they have not put up new MA 138 exit signs before these at the 1 mile mark as of yet. You can see the concrete median barrier that will replace the grass median on the left. Below is a closer shot of the progress they are making in clearing the median for paving and installing the barrier, they are almost to the MA 138 bridge: 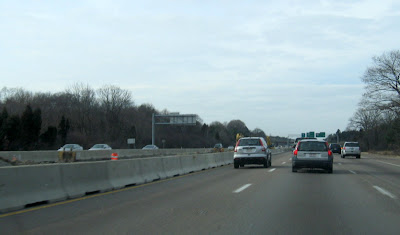 The barriers continue almost to the I-95 interchange, but placing asphalt for lanes probably won't restart until March or April. Here's the start of the median project heading north on I-93/US 1 with the MA 138 interchange in the distance: 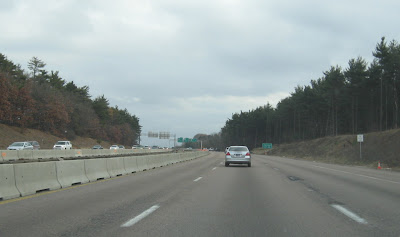 You can see the pavement needs to be replaced badly, there are several potholes and winter hasn't even begun yet. Heading further north one can see the first sign replacement from last summer for the exit to MA 24, changing from a typical BGS to a diagrammatic sign: 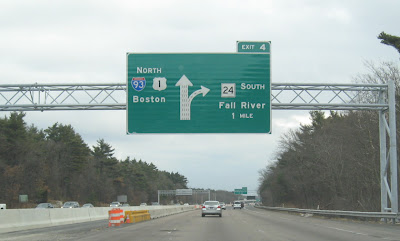 The area to the left is one of the entrance areas for construction vehicles working on the median barrier, once a 1/2 mile or so section is complete the jersey barriers are taken down and replaced by orange barrels. Two newer signs have appeared for the next exit in the past month: 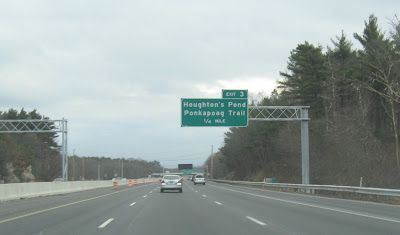 There's one previous sign that has not been changed. The new sign at the ramp is the last new sign heading northbound on I-93 (a sign replacement project, a separate contract is supposed to take care of replacing the signs north of MA 24 to Boston, but it has not started yet even though it was let in late 2008).

The new lanes have mostly been placed on I-95 from where I-93 ends past US 1, but it is still a 3 lane highway each way due to construction of sound barriers: 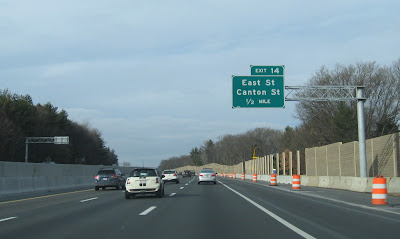 The orange barrels are in the future breakdown lane, they get moved out at least 1 lane when construction is going on. The sound barriers go north from after Exit 13 all the way up the ramp for Exit 14, as seen here: 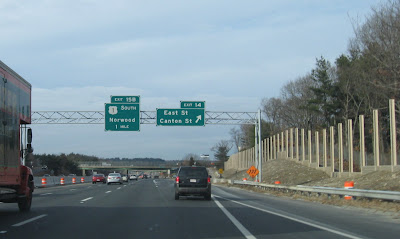 The sign for Exit 15B is in somewhat a violation of MUTCD, since it calls for a sign for the next exit, Exit 15A (To MA 1A). Since US 1, however (unmarked along its routing with I-95 north as it is) is leaving the interstate at this point, I guess it takes precedence. The last section of bridge widening work is now starting on north of MA 109 (Exit 16). The entire project is supposed to wrap up in about 3 more years.

Photo Extra--
Some Springfield Meet photos. Here's a view of the Connecticut River and bridge from Springfield's riverfront park: 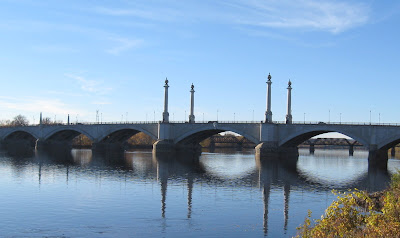 A view across I-91 of the Springfield cityscape: 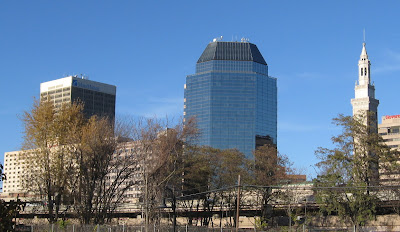 And since it wouldn't be a road meet without a sign photo, here's a view of a sign for the MA 83 Exit off of I-91: 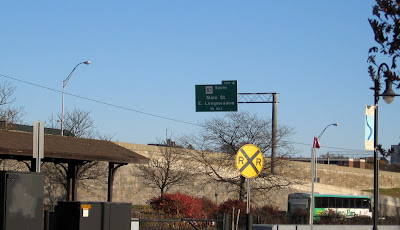 I will continue to take photos of newer signs along I-93 (hopefully including the Southeast Expressway section) as they appear.