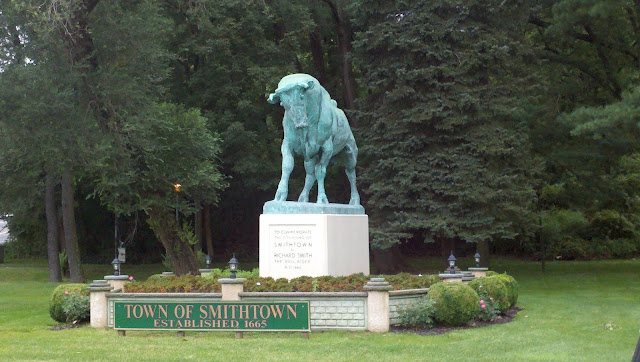 Before I moved to Upstate New York as a young man, I grew up in the Long Island town of Smithtown during the 1980s and 1990s. The recognizable symbol of Smithtown is a bronze statue of a bull named Whisper, located at the junction of NY Route 25 and NY Route 25A near the bridge over the Nissequogue River. Why a bull, you may ask. The bull is a symbol of a legend related to the town's founding in 1665 by Richard "Bull" Smythe, with a modernized name of Richard Smith. It also so happens that there is a story behind the legend, one that involves ancient land right transfers and some modern day roads as well.

So the story goes that Smythe made an agreement with a local Indian tribe where Smythe could keep whatever land he circled around in a day's time riding atop his trusty bull. Choosing the longest day of the year for his ride, he set out with his bull Whisper and went about riding around the borders of the Town of Smithtown. As legend has it, Smythe trotted out one of Whisper's favorite cows the night before to trace the route, as the cow's scent would certainly quicken Whisper's pace and get Smythe to the end of the 55 mile border in time. He would start at the east end of what is now Smithtown, go south to Lake Ronkonkoma, then west to Hauppauge and Commack, then  north along today's Town Line Road, which marks the town's western border, and finally north to the edge of Long Island Sound. Of course, there were breaks during the day's long journey. At noon, Smythe munched on bread and cheese in a hollow, inspiring the name Bread and Cheese Hollow Road in Kings Park. At the end of the ride, the land was Smythe's.

As fun as the legend sounds, it couldn't be further from the truth. Richard Smythe was an early colonial settler, first arriving in the Massachusetts Bay Colony from England in 1635. He then made his way to Long Island, with record that he settled in Southampton in 1643, where he became a local freeman, leader and a shrewd businessman. He became a land proprietor, held office and was a constable in Southampton. However, Smythe was banished by the Puritan leaders of Southampton in 1656 and resettled in Setauket, on Long Island's North Shore. Living in Setauket gave Smythe a firsthand knowledge of the land surrounding the Nissequogue River in what is now the Town of Smithtown and Smythe began to think about obtaining these lands for himself.  The lands that were owned by the Nesaquake tribe, who were dominated by the largest tribe on Long Island, the Montauks, and their chief Wyandanch.  Wyandanch was recognized as the “ruler of all the other sachems on the east end of Long Island” and all the tribes paid tribute to him. What is surprising is that in 1659, Wyandanch gave away the Nesaquake lands to an Englishman named Lion Gardiner, who was the patentee of Gardiner's Island off of eastern Long Island, and this is where Smythe enters the picture. How Gardiner obtained the land was a result of the Montauks being attacked in 1653 by the Narragansetts when they paddled across Long Island Sound in their war canoes to attack the Montauk tribe. In the ensuing battle, half the Montauk tribe was killed and Wyandanch’s daughter, Princess Momone, “the Heather Flower,” was kidnapped. Wyandanch sought Lion Gardiner’s help in getting his daughter back. Lion Gardiner appealed to Massachuetts authorities to pressure the Narrangansetts into returning Princess Momone to the Montauks. Tradition has it that the Princess was ransomed for a huge pile of wampum and returned to her father at Richard Smythe’s house in Setauket.  In a “deed of friendship”, dated July 14, 1659, Wyandanch conveyed the Nesaquake lands to Lion Gardiner.  What is even more intriguing is that Richard Smythe witnessed this deed, and four years later in 1663, Lion Gardiner sold these very same lands to Richard Smythe, although there is speculation that Smythe won the lands in a game of cards.

But the real story doesn't end there. Sometime after receiving the Nicolls Patent on March 3, 1665, Richard Smythe moved his family onto to the Nesaquake lands in Nissequogue and started the settlement that was to become Smithtown. It took Smythe a dozen more years of court battles to ensure that Smithtown was really his. When the English court didn't give him what he wanted, he tried the Dutch. And when the Dutch lost New York, he went back to the English. It went on and on. Finally, the last bits of Smithtown were declared his in the Andros Patent of 1677.

Though it's likely Smythe's demeanor may have had something to do with inspiring the "Bull" myth, historians have come up with several theories. One is that Smythe had a pet bull he liked to walk around town. Others point to Smith's coat of arms: a bull rising out of a shield decorated with six fleur-de-lis symbols. Or it could be a papal bull. Apparently, papal bulls, decrees issued to settle matters of church and state, were very popular during the 17th Century. Papal bulls were sometimes used to resolve boundary disputes between dioceses or parishes. This would certainly line up with Smythe's legal battles to resolve the boundary disputes surrounding early Smithtown. 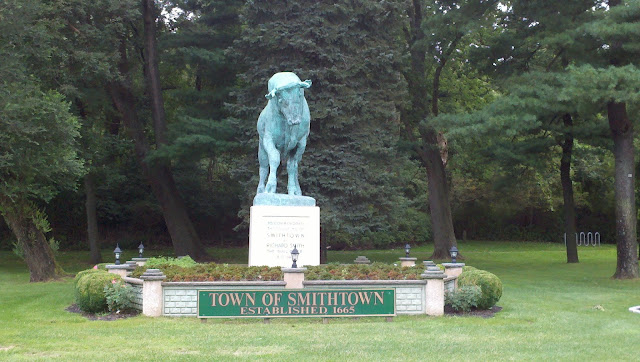 Now about that statue, this is how it wound up in Smithtown. In 1903 Lawrence Smith Butler, a descendant of the town founder Richard Smythe, proposed the idea of a bronze statue to his friend sculptor Charles Cary Rumsey, who was known for his work of wildlife to create the bronze statue. Rumsey conceived the idea while he has studying at The School of Fine Arts in Paris. While the statue was designed in France, it was cast in Brooklyn. Butler believed that money could be raised to pay for the project and a price of $12,000 was agreed upon for the completed work. When casting was completed in 1923, the statue measured 14' long, 9' tall and weighed five tons. However, the funds were not raised and the statue was not shipped to Smithtown. It sat instead in front of the Brooklyn Museum as part of a major art exhibit for a number of years before being placed into storage.

In 1941, Butler was finally able to raise funds to cover the cost of moving the Bull statue and convinced the Town Board to build a 7 foot concrete base. Butler also persuaded Rumsey's heirs to donate the statute. It was in the spring of 1941 when the Bull finally made his way across Long Island and was presented to Smithtown by Mary Rumsey. She was the daughter of the sculptor and also married to New York State Governor W. Averell Harriman.

As for the name "Whisper", Smythe's bull didn't have a name in the story that had been handed down for generations. Students from an elementary school chose the name Whisper for the bull after a local newspaper ran a contest. Now green with age decades after the statue's arrival in Smithtown, Whisper the Bull still stands as a reminder of the charming legend about good ol' Smithtown.

Unknown said…
Thank you for a wonderful piece of Smithtown history. Truly enjoyed it.
4:36 PM

Unknown said…
To Lisa: I use to love to tell that story now you have
Remove one of my great est
Story's from my book of mythology
9:30 PM

Anonymous said…
There are many stories about how the Bull, from time to time, has acquired testicles that have been painted red by teenaged pranksters. But those stories are left for another day.
2:52 AM

Anonymous said…
My brother and I just drove by "Whisper, the Smithtown Bull," and my inquiring mind needed to know! Thank you for an absolutely delightfully written and thorough piece of research!
6:59 PM