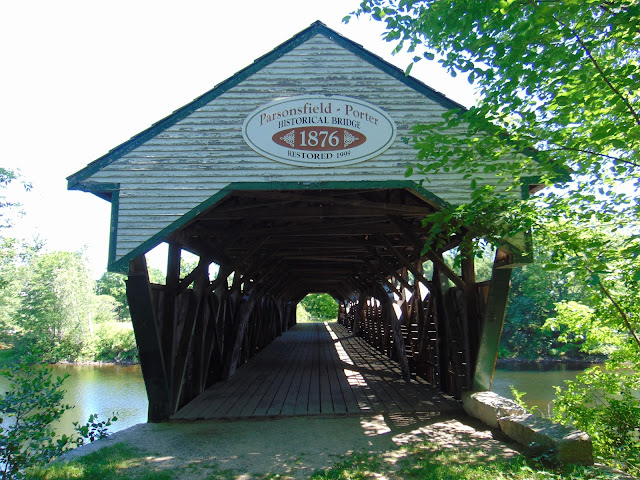 Spanning over the Ossipee River on the border between Porter in Oxford County, Maine and Parsonsfield in York County, Maine is the 152 foot long Porter-Parsonsfield Covered Bridge. The Porter-Parsonsfield Bridge is built in a Paddleford truss design, which is commonly found among covered bridges in the New England states. The covered bridge is the third bridge located at this site, with the first two bridges built in 1800 and 1808. However, there seems to be some dispute for when the covered bridge was built. There is a plaque on the bridge that states that the bridge may have been built in 1876, but in my research, I have found that this bridge may have been built in 1859 instead. That may check out since a number of covered bridges in northern New England were built or replaced around 1859 after a really icy winter.

The year that the Porter-Parsonsfield Covered Bridge was built was not the only controversy surrounding its construction. There was a dispute over building and maintainance costs for the new bridge. A group of selectmen from Porter and Parsonsfield met on the old, uncovered bridge span. The meeting culminated when one of the Parsonsfield selectmen took a knife and tossed it at the middle of the span. He proceeded to say "the town of Parsonsfield shall build so far and no further!" This dispute let to such occurrences as the roof of the bridge containing two different types of roof shingles. The covered bridge closed to vehicular traffic in 1960 with the construction of the adjacent steel and concrete bridge on ME 160. The bridge was renovated in 1999, and with that, new cedar roof shingles were put on the bridge, but the bridge is still only open to pedestrians at this time.