By Challenger Tom August 31, 2018
In 2014 I found myself on Davis Island which overlooks downtown Tampa. 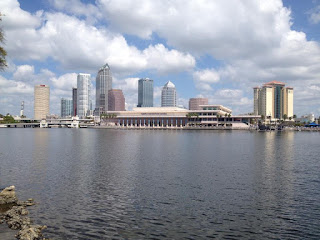 Davis Island was created from dredge expanding the small natural islands of Little Grassy Key and Big Grassy Key in the 1920s.  From the northern tip of Davis Island all of downtown Tampa can be seen.  On the far left the mouth of the Hillsborough River can be seen beneath the 1926 Platt Street Bridge which is a bascule span.  Behind the Platt Street Bridge the Selmon Expressway/Florida Toll Road 618 can be seen above the Hillsborough River.  In the center of the photo the Tampa Convention Center is obvious along the waterfront.  Tampa has the second highest number of high rise buildings in the State of Florida at 69 which is only behind Miami.