By Challenger Tom June 27, 2018
Back in 2012, I visited Meteor Crater a couple miles south of where US Route 66 used to traverse between the Two Guns Trade Post and Meteor City Trade Post. 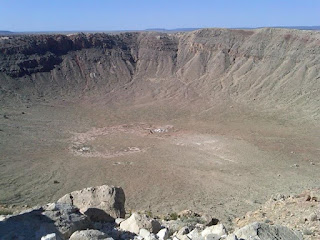 Meteor Crater was originally named the "Canyon Diablo Crater" after a rail siding on the Atlantic & Pacific Railroad located on the rim of Canyon Diablo.  Meteor Crater was originally thought to be part of the San Francisco Volcanic field which forms the high peaks of the San Francisco Range near Flagstaff.  In 1903 Daniel Barringer's Standard Iron Company struck a mining claim at Meteor Crater.  The Standard Iron Company believed that Meteor Crater was formed by an impact event and that a large amount of iron would be present at the bottom of the impact crater.  The impact theory of the Standard Mining Company wasn't proven until 1960 when conclusive evidence was provided by Eugene Shoemaker.

The Standard Iron Company never did find an iron meteor core given that it had vaporized on impact.  The Barringer Family still owns Meteor Crater which was host to several NASA tests in the 1960s and 1970s.  The US Geological Survey still refers to Meteor Crater as "Barringer Crater."

Looking northwest from the rim of Meteor Crater the San Francisco Peaks can be seen.  US Route 66 would have crossed near the top of the level surface in a diagonal line in the photo below.  Interestingly US Route 66 used to have an observation tower called the "Meteor Crater Observatory" next to the eastbound lanes where passersby could stop and take a picture.  From a distance, Meteor Crater looks like an average mountain or bluff which probably would look terrible in a photo, odd that there was enough of a draw for that sort of thing. 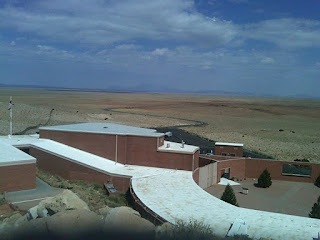