By Challenger Tom June 07, 2018
Back in 2012 I visited an old alignment of US Route 85 and Elephant Butte Lake on the Rio Grande River. 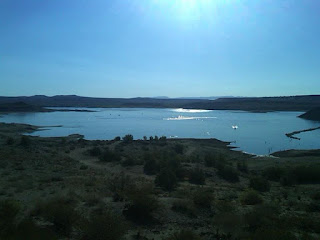 Elephant Butte Lake is the largest Reservoir in New Mexico with a maximum surface area of over 36,000 acres.  Elephant Butte Dam was constructed from 1911 to 1916 and was at the time the largest dam built for the sole purpose of irrigation water impounding.

When US Route 85 was first signed it was routed through what is now the City of Elephant Butte on New Mexico State Route 195.  US 85 would have ran briefly along the west bank of Elephant Butte Lake to modern NM 179 where it continued to Hot Springs (Modern Truth or Consequences) on modern NM 51.  According to Steve Riner's New Mexico Highway site US 85 was routed on the current alignment of NM 195, NM 179 and NM 51 until the 1940s when it was shifted to the modern alignment of NM 181.

Interestingly NM 195 used to carry traffic over a one-way routing  Elephant Butte Dam until the early 2000s.  More information can be found regarding the topic above on Steve Riner's page for NM Routes 176-200.  Given the route over the dam was closed I obviously didn't a chance to cross it in a car.  Suffice to say finding information regarding state highways in New Mexico was difficult back in 2011-2012 when I was working in the state.  Oddly a large number of New Mexico State Highways don't even have a Wikipedia article to this day.