By Challenger Tom June 09, 2018
Back in 2016 I was returning home from Bishop via Tioga Pass.  Conventional wisdom would have dictated using US Route 395 all the way from Bishop to the Tioga Pass part of CA 120 but I wanted to try something different and took US 6 north to Benton in Mono County.  California State Route 120 has a eastern terminus in Benton which I took westward to US 395.

Interestingly Benton was originally located four miles to the west on CA 120 which is now the site of Benton Hot Springs.  Benton Hot Springs is sometimes referred to as "Old Benton" denoting that it was site of the community.  Apparently mining claims were found near Old Benton in 1862 but it seems the area was used earlier as a checking station for travelers heading to the Californian Gold Country.   One of the buildings in Old Benton shows an establishment date of 1852. 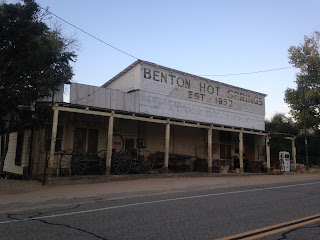 The first map reference to Old Benton is listed as Bentonville on this 1873 Map of California.

By 1883 the Carson and Colorado Railroad would arrive in vicinity of Old Benton to the east where the modern community now lies on US 6.  I'm not sure when the name Benton was shifted to the modern site but it appears to have happened relatively quickly.  This 1883 Map of California shows the Carson and Colorado Railroad bypassing Old Benton to the east.

Approximately 32 miles of Old Benton is the ghost town site of Mono Mills. 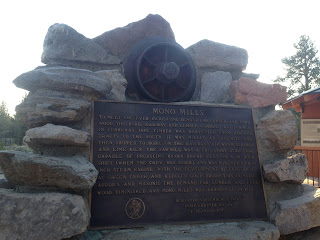 Mono Mills located at approximately 7,300 feet above sea level was founded by the Bodie Railway and Lumber Company in 1880 to service Bodie.  Bodie is located to the north on the opposite side of Mono Lake in the Bodie Hills.   The Bodie & Benton Railroad between Mono Mills and Bodie was completed by 1881, it can be seen on the above map of California from 1883.  As the fortunes of Bodie began to decline it had a direct effect on Mono Mills which was abandoned by 1917.  There is not much left in Mono Mills but a couple trace remains of a sawmill. 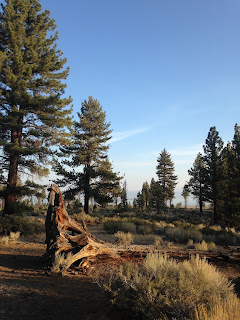 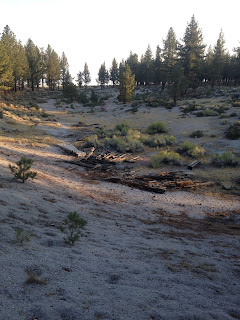 Of course the story of Bodie is one of the most well known ghost town tales in the United States.  More details on the subject can be found on my California State Route 270 to Bodie blog.

The remaining approximately 9 miles of CA 120 west to US 395 are fairly conventional aside from the obvious traces of volcanic rock.  CA 120 has an approximately 5 mile multiplex of US 395 before splitting west towards Tioga Pass and Yosemite National Park.  More information on the Tioga Pass Road can be found on this previous blog entry.

According to CAhighways.org CA 120 between modern US 395 and US 6 was part of Legislative Route 40 which was adopted in 1933.

Interestingly it would seem CA 167 may have been planned as a realignment of CA 120 north of Mono Lake.  More information can be found here.