By Adam February 15, 2018
When I was last doing these catching up posts it was January 2013 - the last few days and weeks before our oldest son was born.  Hard to believe he is now five, and the many adventures he has taken us on!  Then we had a second one, and he's quickly becoming two.  So I was actually surprised that when I was starting to move some of the old gribblenation Georgia features over to the blog, I realized that I never did a post about Maggie and I's time in Savannah as we closed out our honeymoon in October 2011.

After four fun, yet exhausting days at Disney, Maggie and I started our return journey back to Raleigh but with a two day stopover in Savannah.  We stayed at The Ballastone Inn, a historic bed and breakfast within the city's downtown.  The Inn dates back to 1838 and had a colorful history in the 150 years prior to it being converted to a Bed & Breakfast in the 1980s.  We had a pretty casual first night in Savannah - opting to watch football at an Irish pub within walking distance from the Inn.

The next morning, we walked a handful of blocks to Paula Deen's Lady & Sons restaurant.  Now, keep in mind this was before she got in trouble with the Food Network.  Anyways, at this time her restaurant was very popular and tourists, like ourselves, would line up every morning to make their reservations for lunch or dinner.  The photos are from when we arrived to the line at 9:15.  I think they started to take the day's reservations at 9:30 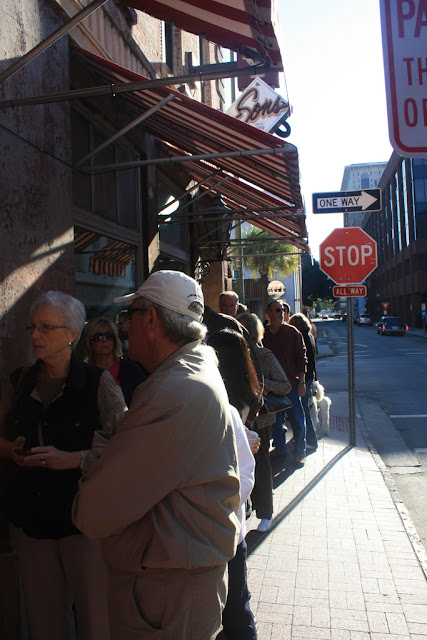 The line wasn't too bad, compared to what we were told lines are in the summer months.  Since then, reservations are now accepted online and up to one year in advance.  We were able to get a 12:45 reservation and returned at that time for lunch.  The Lady & Sons specializes in Southern Comfort Food and offers menu items and a buffet.  We both had the buffet and it is reasonably priced - lunch buffet is $16 today - so mostly like a little less seven years ago.  The food was good, not memorable, and looking back we'd probably have ordered off of the menu.

Following lunch and massages at a local spa, we took a carriage tour of Savannah on our way to our dinner destination, Alligator Soul.  Our tour covered many of the sites and squares within Savannah. 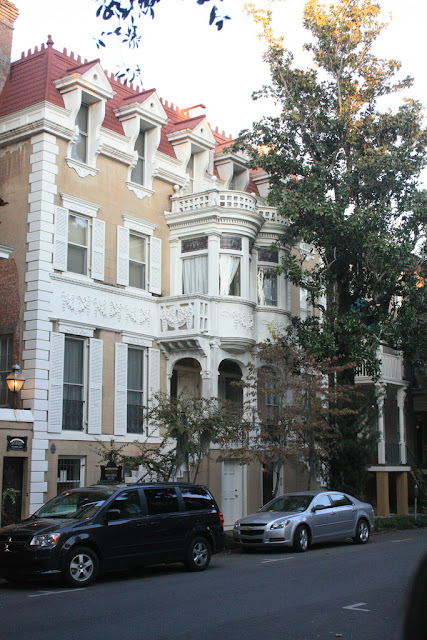 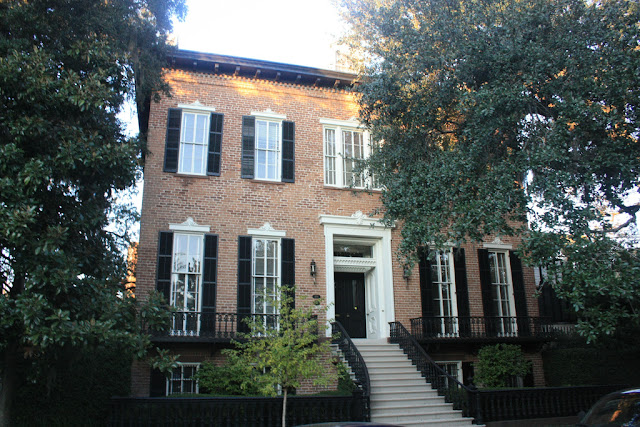 Dinner at Alligator Soul was excellent.  Alligator Soul is known for some of its more exotic meats including - elk, kangaroo, ostrich, among others.  Maggie and I didn't go rather exotic as she had a filet and I went with duck.

As a whole, we were too exhausted to really enjoy and experience Savannah.  We had been to Charleston, St. Augustine, and Walt Disney World over 9 days and were worn out by the time we got to Savannah.  That is not to say we enjoyed our time there as we did immensely.  More that we would like to have toured, seen and experienced more but just were too tired to do so.