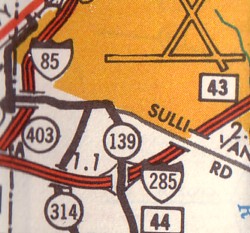 When an airport expands, the growing facility usually takes a lot with it.  And in the case of the early 2000's runway expansion of Atlanta's Hartsfield-Jackson International Airport, many changes were made to the highway system surrounding it.  Both Georgia Highways 139 and 314 have not been immune to the airport's expansion.  The first changes occurred in the early to mid 1970's.  That expansion of the airport led to a rerouting of GA 139 and a change to the terminus of GA 314.  The 1978 GDOT map (above right) shows the results of the 1970s expansion.

Nearly 30 years later, another runway expansion would alter the southern grounds of the airport.  Along with other surface streets, GA 139 and 314 were greatly impacted.  GA 139 now snakes its way through the airport grounds while GA 314 has been scaled back to end at GA 139 just inside the Perimeter (Interstate 285).  The changes to both routes and various surface streets have left interesting pockets of former alignments of the two state highways within the airport's grounds.  Back in 2004-2006, John Krakoff documented some of the surprises that were still left standing.