By Bob Malme January 11, 2010
The recent holidays gave me an excuse to travel back to my home state and check out progress on the various highway projects, particularly signing projects, going on. While not much progress has been made on MA 3 , one old sign taken down (the original Exit 20 sign for I-93 South), nor on I-93 from Randolph to Boston (1% completed since last spring, a few blue gas/food/lodging signs), there has been new signage put up for other road construction related projects south of Boston.

1. The "128" Add-A-Lane Project. This project, which will add a fourth travel lane between the MA 24 Exit (Exit 4 on I-93/US 1) and the MA 9 Exit (Exit 20 on I-95/128), has started its lane adding-phase after several years of bridge reconstruction projects. Currently, work is mostly complete around the I-95 South interchange and is proceeding north (on I-95) toward the South US 1 Exit and north (on I-93) to MA 24 South exit (confused yet?). New signs started going up on I-95 toward US 1 last fall. Here are the only new ground-level signs on I-95/US 1/MA 128 after the I-95 north merge. Notice one new sign missing in the center? 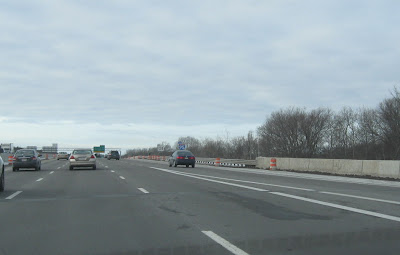 No US 1 sign. None has ever been put up on the I-95 portion of '128' going this direction, while only 1 appears after the US 1 on ramp going southbound. Here's some of the newer overhead signs heading toward the US 1 South Exit: 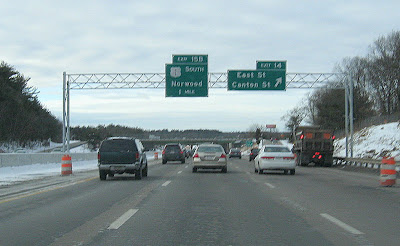 Ironically, US 1 is the second ramp at the interchange and is mentioned first. You can see on the left with the widening the grass median has been replaced by cement barriers. This will be the case from MA 24 northward to just before US 1 where the median becomes much wider. Here you can contrast old (left) and new (right) overhead signs: 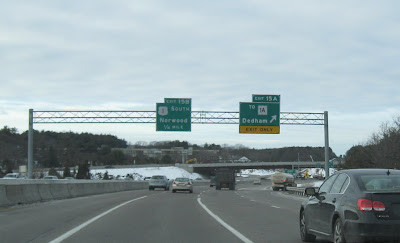 The final overhead assembly northbound (for now) is made up completely of new signage: 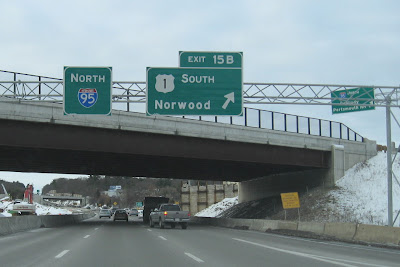 You can also see the sign on the road above has been replaced also, there are, as of now, no references to MA 128 along the road as existed before construction. Turning around now: 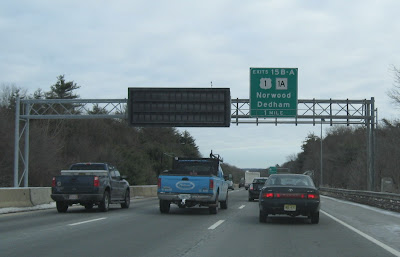 At the MA 109 exit, an old sign appears on a new VMS assembly. While the signs on this gantry are old: 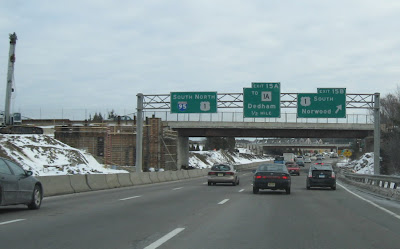 The new bridge being built as part of the project can be seen behind it. They have added a new sign assembly 1/2 mile later: 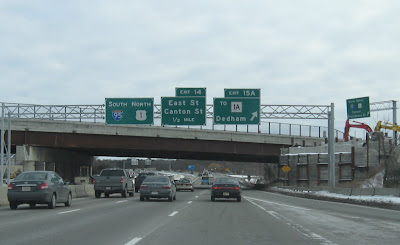 Remnants of the old bridge can be seen on the right. On the road above the sign is new and you can make out a North US 1 trailblazer, but again, no MA 128 signs (there are no more until the 'End 128' sign at what MassDOT now refers to as the the I-93/95 split. The project has also produced a better advanced guide sign for I-93: 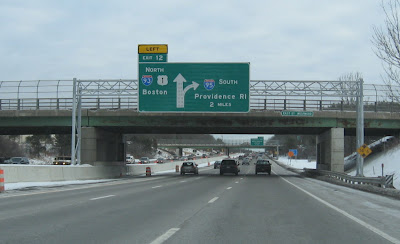 The previous sign was a small sign on the left with I-93 and I-95 shields and '2 miles'. This sign is not new, put up last summer, but it's one of the few signs I've seen in Mass. that has the distance in feet: 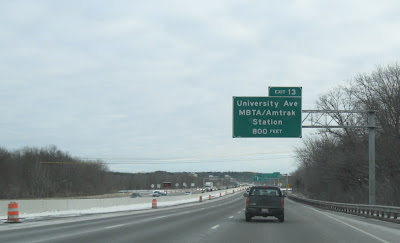 The posting of this sign allows me to digress by taking the exit ramp and seeing some of the unique signs on the streets around this exit. For example, at the intersection with University Avenue, if one is looking to access '128' North this is what you see: 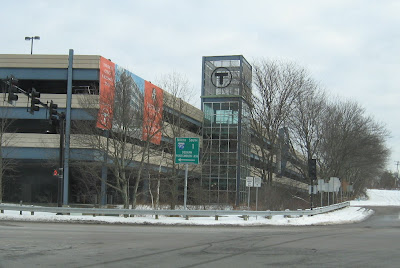 A 'Mass. Green Sign' before a differentiation was made between state and US routes (Notice again no 128 sign). Turning the corner, however, one gets these signs: 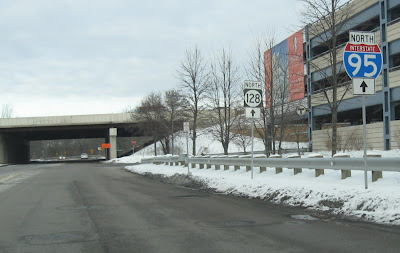 Did we suddenly enter New Jersey? There is also another circle 128 sign across from the intersection in the distance (no photo). And after one turns around one can get directed to interstates directed in opposite directions: 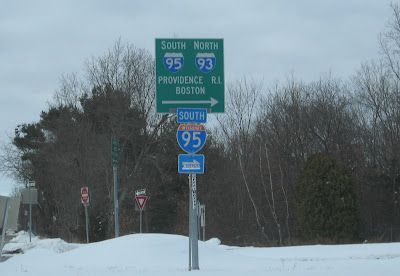 The extra I-95 sign was apparently put up on behalf of unions. What will it read when updated to include US 1?

2. The Burgin Parkway Extension onramp project. This is another project now almost complete which involved moving access to MA 3 south and I-93 from the Parkway from a surface street to a flyover ramp to remove traffic accessing the Crown Colony office development near the Quincy Adams T Station (Exit 19 of off MA 3) from the onramp traffic. In the course of the project, new overhead signs were put up on the existing parkway and new ramp to match those being changed along MA 3. The previous overhead signs were after the T station, now the new first overhead sign is a 1/2 mile earlier and tries to fit in all the possible destinations: 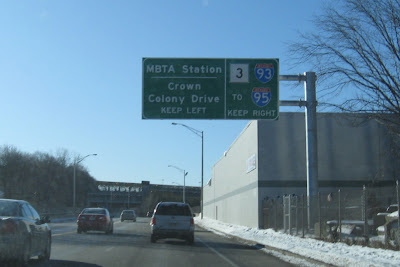 As the road splits the signs provide more detail for the three destinations of traffic: 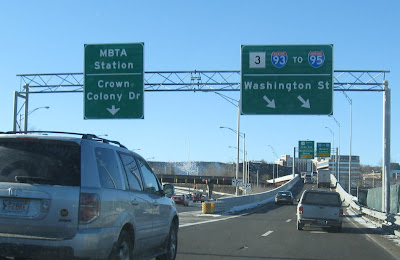 In this case, the split between the access point for the T Station and office park (the old route to the MA 3 ramps) and the new highway ramps. Notice the shield signs have MA 3 first. Definitely not correct according to MUTCD rules which say interstates should be listed first. However, since MA 3 and I-93 North go together, putting MA 3 after the I-95 shield would imply it is routed on I-93 to I-95 or I-93 South, which is not correct. This is not repeated in the next sign: 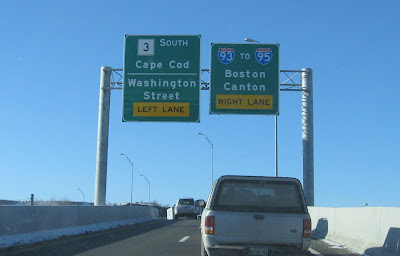 There are not, however, like the BGS sign assemblies on MA 3 North itself, any MA 3 or US 1 North trailblazers which are to be put on the right pole of the sign. While one for MA 3 does appear in the photo below (bottom right), sorry about the sun glare, no US 1 sign is present: 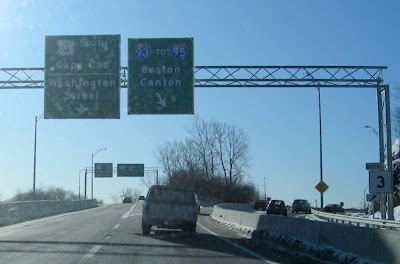 I did spot in Downtown Boston, US 1 and MA 3 shields added to a pole of one of the I-93 Big Dig tunnel entrance ramp overhead signs, did not have my camera though. Hopefully more will be put up this year, and maybe the Route 3 signage project will be completed. It appears only 4 more signs (on the Washington Street onramp, opposite where I was taking photos) need replacing, and the promised pole signage to be added, to complete the project which started in 2005. The I-93 project is to be done by 2012, but at the 1% a year pace, dare we say 2099?