Roadtrip to Greensboro Through High Point

By Bob Malme January 18, 2010
As Adam indicated on his I-73 meeting post, I took a trip Thursday afternoon to attend the workshop put on by NCDOT showing the revised plans for the NC 68-US 220 Connector. I also was able to talk to engineers working on the project to start in 2012 which will widen US 220 south of NC 68 to the Connector. Adam posted what I learned on his previous entry.

On the way, I thought I'd take the opportunity to confirm sign revisions along the I-85 portion of the Greensboro Loop I hadn't visited before and to check on progress since December in building the new I-74 freeway. According to NCDOT documentation, only .3% progress had been made in the month since, not surprising given the weather. The project between Business 85 and Spencer Road at the end of the year was listed as being 81.2% complete. 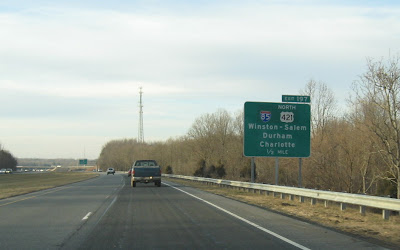 The signs had been revised. It appears the I-85 sign was moved to the left with the US 421 shield and direction added on the right. 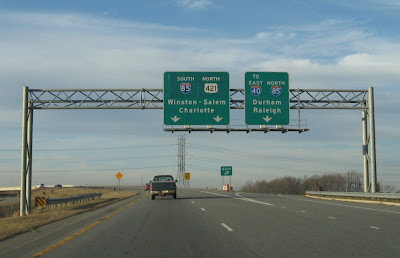 For the overhead sign on the left a similar act was done, however the sign on the right is the original, notice that I-40 is listed first, the 'To' was also never taken down so no revision was necessary when I-40 was taken off the Loop.

2. I-74 Construction. Since it was a weekday and there was a lot of construction activity still going on. I visited all the sites I could before the sun set, and then proceeded to the meeting.
A. Baker Road-A contact e-mailed me earlier in the day that they were placing what appeared to be a final layer of concrete on the bridge that morning. When I got there in the afternoon, they had closed the eastbound roadway so they could extend asphalt from the original road alignment to the new bridge: 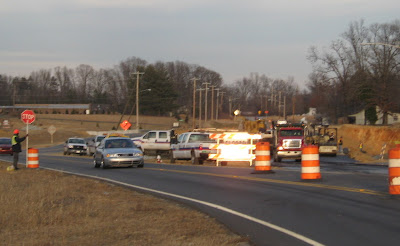 This had already happened on the other side of the bridge. If they were able to place lane markings on Friday, and the concrete they put down cures very rapidly, then it's possible the bridge is open or will open during the next week. This is the last existing road bridge that needed to be built for the freeway. The only bridge construction left is for the new I-85 bridges over I-74 whose sides still only consist of wire mesh and need additional concrete. They also have to complete laying asphalt on the flyover ramp (more on that later).

2. Jackson Lake Road. The view from the bridge toward the west still shows a lack of a westbound lane. Though some of the dirt may have been removed. Dirt for landscaping, which work was proceeding on the other side of the bridge, can be seen on the completed lanes behind the remaining dirt that needs to be removed: 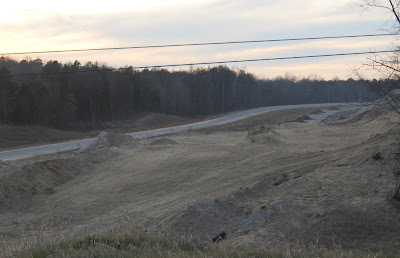 3. Kivett Road Bridge and area between Kivett and I-85. The view of the bridge actually shows more dirt from before. I assume removed as part of the westbound side landscaping process: 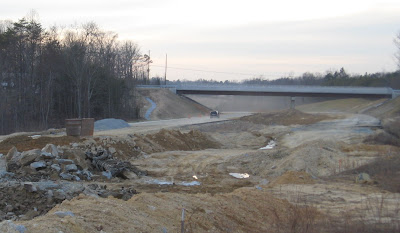 The vehicle seen going the wrong way on the future eastbound lanes by the bridge was one of many contractor vehicles still in operation around 5PM. It appears the contractors are trying to make up for time lost in December. Some of the landscapes built for the freeway are quite impressive, such as the size of the hill rising along the eastbound lanes as seen from Dresden Road. This is mostly made up of material dug up to grade the roadbed in the surrounding area: 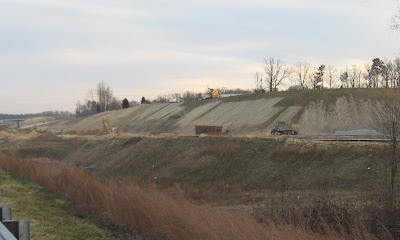 The view toward the I-85 bridge shows progress on landscaping toward the new interstate bridges: 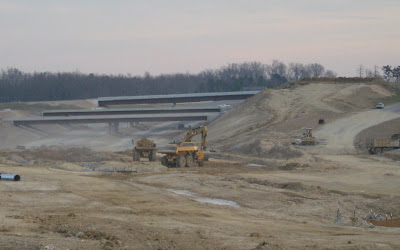 Dust from the ongoing work is obscuring the landscape beyond the construction equipment. Here's a closer look at all the landscaping work being done: 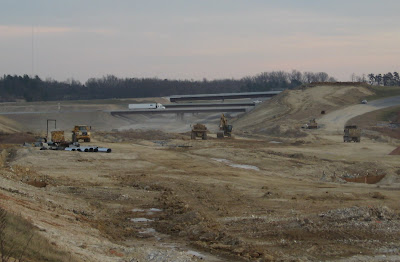 4. I-74 freeway on other side of I-85. Little progress is visible since most work, including guardrails has already been completed. The on ramp to I-85 North from I-74 West must be complete as the yellow contractor vehicle seen above the orange and white road closed barrier was using it at a high speed after 5, maybe in a hurry to go home?: 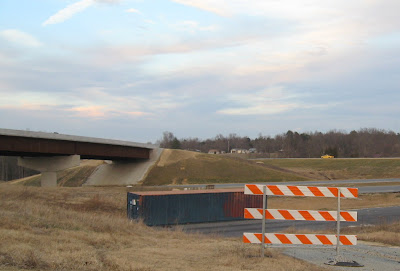 All the ramps to I-85 appear complete, the only unpaved section seems to be the part of the flyover ramp before the bridge. They also need to place guardrails along that ramp and the eastbound ramps as they have completed on the west side.

5. Poole Road Bridge. Not much progress seen here, again because most of the freeway roadbed had been completed in the fall. There is, however, a connection to a bridge over a creek, looking westbound, and landscaping, that still needs to be completed: 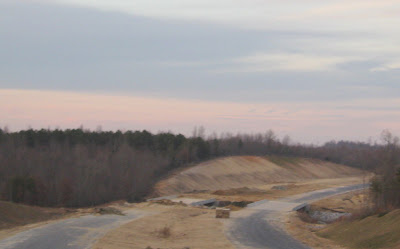 Meanwhile, the view toward the east from the Poole Road Bridge: 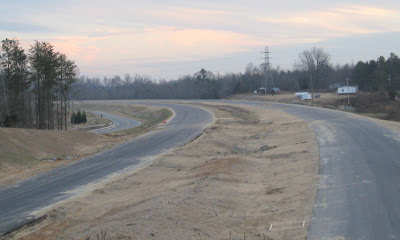 Shows further need of landscaping and possible guardrails as one proceeds toward Cedar Square Road. 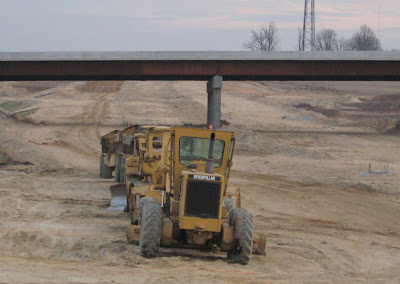 A view of the Cedar Square Road bridge from this intersection. They have started ripping up the old Cedar Square roadbed to build the new freeway lanes west of the bridge, they have many more truckloads of dirt to go: 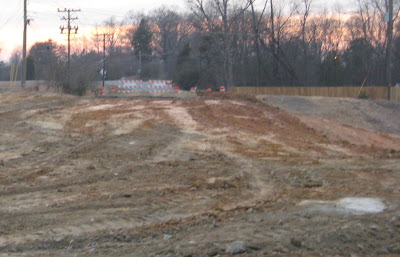 This is looking westbound from the corner turn at Poole Road where Cedar Square Road used to go. They have not made this very clear to motorists on US 311. Several of which traveled up to the barrier and had to turn around while I was there. This is the view looking back toward Poole Road showing the progress in building the eastbound off ramp: 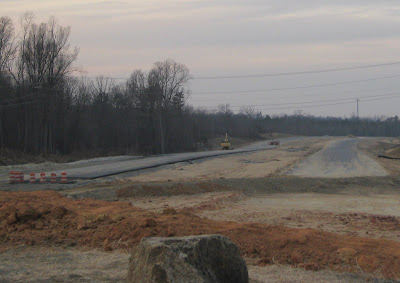 The ramp starts on the left lane after the yellow excavator and proceeds off the highway where the orange barrels are. This I guess is to signify construction trucks have to use the ramp, for now, to get to the other side of old Cedar Square alignment. Here's the new intersection of Poole and Cedar Square Roads which will be opposite both the westbound on and off ramps: 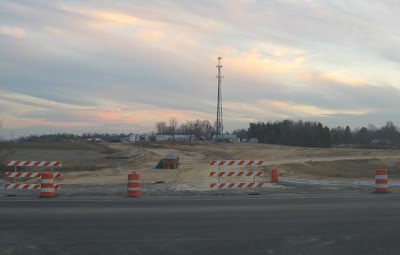 There will be a traffic signal placed at this location when the freeway ramps are opened. If the contractors can make it up to 85% completion by the beginning of March, then I think a June 2010 opening, quoted by NCDOT officials to those in High Point, is still possible.